Is Pakistan Okay With Politicians Threatening Rape On TV? 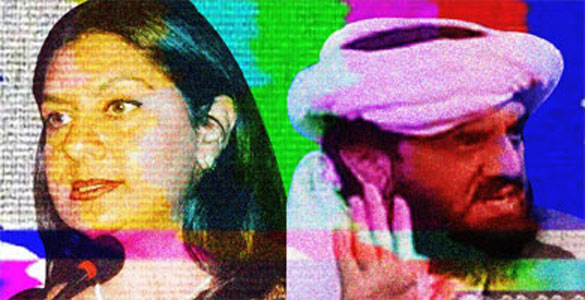 For us urban folk caught up with frivolous concerns, truths like rape, gang-rape, tribal verdicts for rape or gang-rape and honour killing because of rape have always been relegated to corner stories on the back pages of our English dailies. The picture is clear, but the boundaries are clearer: it happens, but it does not happen to us.

Who have we been kidding?

That prejudice, disgust and narrow-minded revulsion for the ‘softer’ sex recently bounded through our television screens. On a live TV talk show some nights ago, applauded campaigner and journalist Marvi Sirmed was verbally accosted and threatened with force by a bearded bulwark of what has become Islam in this country.

Marvi had the gall, the complete and appreciable bravado, to simply agree with another speaker Barrister Masroor on the show. Masroor had commented that when it came to honour killings in Pakistan, the Council of Islamic Ideology (CII) seemed slumbering in an inebriated stupor.

For agreeing with his words, Jamiat-i-Ulema-i-Islam Fazl's (JUI-F) Hafiz Hamdullah called Marvi a “whore”, vowed to “strip her” if she didn’t quieten down and tried to physically assault her.

While the questionable language was omitted from the transmission, it circulated widely on social media after Marvi posted about her experience.

Her claims were backed by the other panellists on the show. 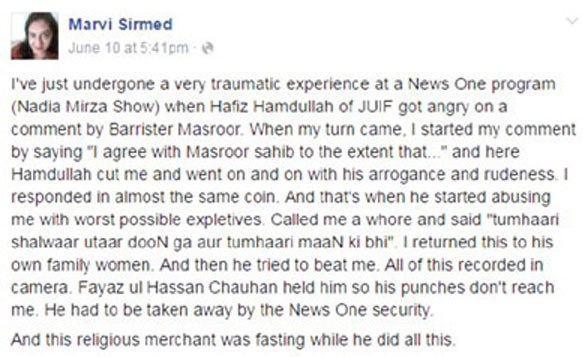 I don’t know about you but if someone airs an incitement to rape on national television — in a country where religious celebrities provoke murderers and hate-mongerers — I consider such threats to be a clarion call for rolling out the legal books and restraining orders, and doing some rigorous rethinking of why these men represent our social and political system.

The ‘holy man’ in question here, Senator — yes, Senator — Hafiz Hamdullah, went on to say that he would not “allow” Marvi to speak.

Errrr, who died and decided to make you king of the oafs?

Marvi is a strong, opinionated woman; she is not the kind to take this type of abuse lying down. Unfortunately, that is how most men here like to give anything to a woman. But Marvi rebuffed Hamdullah (I refuse to use any sort of scholarly title for such a man) in full.

The audacity of a woman in Pakistan, a woman I say, to dish out some sweet scorn? — of course, she ought to be pillaged and shown a knuckle or two. Such was Hamdullah’s reaction and aggression, that he had to be tackled and led out of the recording.

Meanwhile, the show continued airing, stacking up ratings in a world where sensationalism is our favourite kind of televised past-time.

If only it was as simple as a little innocent mansplaining: the constant talking down and bropropriating during conversations, where men like to advance the image that they know more than women do.

If only it was that.

Unfortunately, in Pakistan, men talk tough because they like to follow that up with being tough. Men in Pakistan don’t just feel a need to mansplain, they also feel the need to man up. This is done through a vicious set of controls and primitive practices focused on debilitating the upward mobility of women.

For example, men in Pakistan like to threaten and orally offend because they know they can follow through with ugly promises of violence and misogyny.

These men rarely doubt the power they are allowed over women, which is why men like Hamdullah feel it is acceptable to browbeat a woman into submission with a few vulgar comments; our social constructs have made it possible for statements like Hamdullah’s to be converted into acts.

When a man yells “Rape!” it can happen.

When a man calls a woman a “whore”, she is looked upon as one.

And when a man says she should be “stripped”, she will be treated like cattle, seen as fair bait by all men in search of punishing a ‘bad woman’, and perhaps even attacked.

At the very least, she will be prodded with harsh judgments that are not based on any knowledge of her character, but are based simply on a religious man’s self-righteous outburst.

Marvi Sirmed was made into a ragdoll for the pleasure of re-dignifying male chauvinism in our country, whether in urban centres or in the rural backlands. She was given a male fist of exploitative promise because she stepped out of neatly demarcated lines that tell a woman she must stay in her place.

She was made an example of because she dared to put across what we all feel: “No! I will not be treated like that.”

Marvi is a tough cookie, but our society crumbles and disintegrates when it comes to backing women like her. She has registered a case against Hamdullah’s open incitement to violence against her, and like clockwork, our legal system has granted Hamdullah bail.

I hope Marvi sees her day in the sun and I sincerely, feverishly hope the rest of us support her and others like her who stand up.

It is time to take back the narrative from these goons; it is time to revise our raison d’être and detach our purpose from men who only want to see us submit to their dominance.

Most importantly, it is time to strip political and religious titles from men who have no business representing the faith or the system.