Music is The Food of Love in Islam....Play On!

One of the longstanding myths about Islam is that it is against music and related art forms such as singing and dancing. Occasional examples of moral policing by the likes of the Taliban and similar culturally-blind groups are touted as proofs of Islamic injunctions against music. In accepting such a misleading proposition, however, one of the finest chapters in the history of Muslim societies – of tremendous achievements of some outstanding cultural personalities across genres and repertoires – is subjected to a deliberate process of erasure. The saving grace is that a complete decimation of a cultural reality is not possible as Muslim societies have continued to produce a galaxy of poets, singers, instrumentalists, and dancers, who have excelled as fine exponents of their respective fields of expertise. Importantly, some of the best artists have also been extremely devout and sincere Muslims. 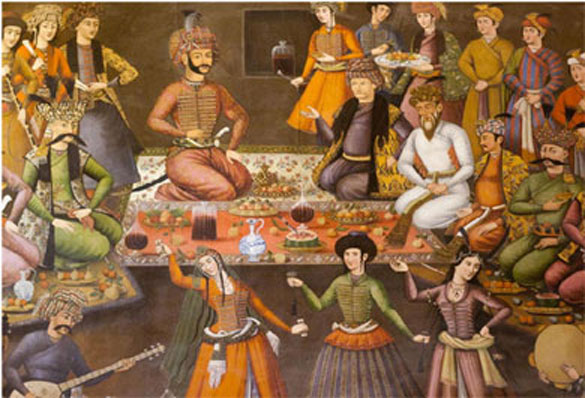 Just a cursory look at the Indian art scene is enough to discard the misconception of Islam being opposed to music. The Bharat-Ratna Bismillah Khan spent a life-time dedicated to his practice and performance of Shahnai; the rest of his time was spent in prayers. Thus, Reyaz and Namaz remained the cardinal principles of his life, and there was nothing contradictory about his love for music and devotion to God. As if Bismillah Khan was not enough, dhrupad, a form of music devoted to clearly identifiable Hindu deities, would be so much poorer without the remarkable contributions – almost on the verge of a healthy monopoly – of the Dagars. Such has been the tradition of respect commanded by this and a host of other Muslim Gharanas of music that even the most politically naïve mufti would not dare issue a provocative fatwa.

The history of growth and development of Hindustani classical music goes back seven centuries to the time of Amir Khusrau. One of the closest disciples of Chishti Sufi Hazrat Nizamuddin Auliya, the multi-faceted personality of Khusrau was able to receive patronage of a series of aesthetically suave Muslim Sultans of Delhi. Khusrau is not only reported to have developed various kinds of ragas, Khayals, and Taranas, but is also said to have invented or improvised a number of musical instruments, Saaz such as Sitar, Sarod, etc., which are central to classical musical performance. Even if Hazrat Nizamuddin and other Sufi masters might have discouraged the use of instruments, his contemporary and later Qawwals would need a variety of instruments as accompaniments for their singing of songs of love and pain. And, despite restrictions put by the patriarchs, female Qawwals and singers have also succeeded in carving out a niche for themselves; imagine Ghazal without Begum Akhtar today.

Music is not only central to devotional expression of love for God, Urdu/Hindi songs of Bollywood films have also been catering to the tastes of a variety of connoisseur. One does not need to dig into the dusty archive of a lost past to illustrate that some of the finest lyricists, singers, and composers associated with the Bombay film industry have come from Muslim cultural backgrounds. Such embarrassing characteristics are now being attributed to Islam and Muslims that it might appear a bit odd, for some, to realize that the Sahir Ludhianwis, Mohammad Rafis, Naushads and AR Rahmans carry Muslim names and there is nothing wrong in that. Like music, films are something that self-styled guardians have condemned as un-Islamic and unacceptable, yet a large number of Muslims are watching all the block-busters – first day, first show on the holy-day of Friday – being delivered by Salman Khan and other Badshahs and Khan Bhais of cinema.

The theologians, on their part, could not have called for banning poetry altogether; the holy Koran is, after all, a versified text that continues to enchant billions of people. The regular call for prayers (azan) also requires people with a fine voice quality; it is not a mere case of rhetorical shouting from the roof-top or through a blaring loud-speaker. Prophet Muhammad himself was highly appreciative of the resonant voice of a manumitted Black slave and early companion, Bilal, known as the first muezzin or caller for prayer in the mosque. The theologically recommended form of poetry also included unconditional submission to the will of God (Hamd), loving devotion for the Prophet (Na‘at), and occasionally a subtle opening up of the longings of heart (Ghazal) – expressing love (Ishq) for the eternal divine (Haqiqi) and never for a perishable this-worldly object of love (Majazi). These forms – Hamd, Na’at, and Ghazal – are supposed to be recited, not sung, though in a melodious voice and conforming to sur. However, in medieval Islam also, the theologians could not check poetical forms such as the exaggerated phraseology of celebration of achievements of rulers (Qasida), provocative outpourings of criticism in satires (Hajv), and even sexy double-entendres (Iham-Goi), not to forget compositions inspired by the beauty of young boys as homo-erotic objects of love (Imrad-Prasti: not so much consensual homo-sexual love, but as a matter of fact Launda-Bazi or pederasty).

So, it boils down to which forms are acceptable and which not, aesthetically sophisticated genre vrs those catering to popular taste, or classical/pop, good music/bad music. Within musicology also, the purists will argue for restrictions in language and elevation of forms, which can perhaps only be maintained for a small section of the cultivated audience with a zauq for refined expressions. For the little pleasures of the multitude, ‘vulgar’ forms are something which cannot be banished altogether for fear of being burnt in hell – real or imagined. Thus, standards of poetry and music are continuously set and re-set, according to the requirements of the time and place. For Hazrat Nizamuddin, a connoisseur of music of the finest quality, it was irrational to issue a Farman banning music altogether. For him and his fellow-travellers on the mystic path (Tariqat), the standard of music and performance was important, including the content of what was being sung, accomplished singers, fine company of listeners, as well as a pleasant time and comfortable location.

In Sufi traditions, the Qawwal’s touching utterances, both content and voice, should be sufficient to create ecstasy (Haal) in a sincere aficionado, who might be allowed to gracefully rise and dance, whereas the fake enthusiasts could be easily identified for their drug-induced shrieks and hurried tearing of clothes, etc. Also, if compositions in Arabic and Persian were no longer helping raise over-powering emotions (Wajd and Surur), there was nothing wrong in listening to poetry in Punjabi, Awadhi, or Bengali. Further, for some occasions and those interested, Bhangras, are not something to be condemned and banned; nor could anyone stop Wajid Ali Shah and his troupe from evolving, in the nineteenth century, the fine dance form of Kathak, knowingly deploying legends and stories related to Hindu gods and goddesses.

Earlier, the 17th-century Mughal emperor Aurangzeb was rumoured to have banned music and, therefore, the aggrieved musicians took out a burial procession to bury music with all its trappings. Musicologists are now telling us that some of the finest theoretical texts on Hindustani classical music were not only written under Aurangzeb, but some were also dedicated to him. The emperor himself is reported to be an accomplished Veena player. In conclusion, therefore, innocent children might still be encouraged to pray to God: Lab Pe Aati Hai Dua Ban Ke Tamanna Meri…Meray Allah Burayi Se Bachaana Mujhko; even as the law-enforcing policemen can also enjoy the unruly public Mujra: Mayen Tow Aayi Hun UP-Bihar Lootne! As the foremost Sufi poet, Maulana Jalaluddin Rumi succinctly put it: only a donkey will have no taste for poetry and music.

Raziuddin Aquil teaches History at the University of Delhi