The Greeting – As Salaamu Alaykum, Peace Be Upon You: Is Altruistic Salaamism Since It Implies ‘I am Responsible for Your Safety’ 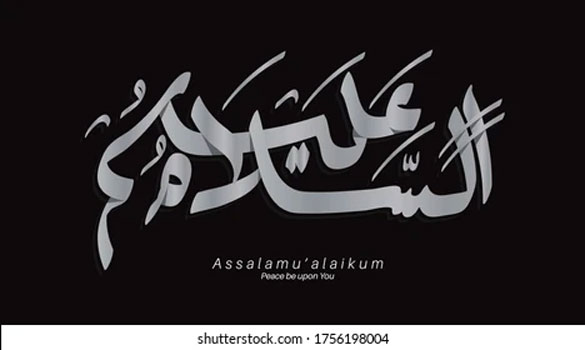 Once it was common practice in industry to “insert” ten to fifteen percent extra in the budget allocation for “Safety”, to cover for potential expenses for accident events. Modern practice has brought a paradigm shift in this mindset. Instead it allows for Safe working training, equipment purchase, progressive Safety improvements measures and thorough investigations of “events” to determine initial causes of accident to eliminate recurrence.

The emphases on working Safely, not only to prevent injury to oneself – Selfishness, which is essential but to inculcate a culture where Safety essentially becomes every individuals responsibility to maintain the entire workplace a Safe environment. Altruism, that includes Self Protection as well. A duty/ Brief placed vicariously on every individual for others Safety, a daares-salaam.

Somewhat similar duty is placed on Muslims' in their greeting, particularly amongst themselves and among Arabic speaking people, is “Salaam-” for short; not dissimilar to greetings in other languages and cultures with unsaid but implied good wishes, more than those expressed in words such as “Good morning” for example. Implied therein as; I hope your day begins beautifully, as a friend I wish you have a lovely day etc.

The above has its equivalent in Arabic too, but more commonly among Muslims one uses the Quranic Arabic salutation As-Salaamu Alaykum. Peace be upon you. Even if the encounter happens to be among non-Arab Muslims and non-Muslims alike. There are these unsaid but implied connotations:

1- In my presence you are SAFE,

3-A safe ENVIRONMENT for us both.

Salaamun; Safe from all dangers; is just one of a derivative of the root SLM. It has others as well. In Urdu Lughtul Quran by G M Parwez lists eight significant meanings with extensive elaborations, among them are derivatives such as Saleem, to be purified from all Faults and blemishes; Sallama, to be protected from danger and so on.

In the Book Quran, this greetings of Peace is repeated numerous times, such as in 7-46, where a long exchange takes place between the rightly guided people in heavenly environment and the misguided:

7-46…They call out to the owners of the garden/paradise salaamun alaikum - Peace be upon you;

and hoping to get in there.

But more significantly, a Muslim who is charged with the duty of maintaining this world as an Abode of Peace and declares it in the Salutation to others: As-Salaamun alaikum and then negates it with death and destruction is doubly sinful, if ever there is such a thing.

10-25, And God invites to the abode of PEACE – Daares-salaam – those guided to the straight path.

The overall message from such references appear to be, that when faced with an environment of hostility, the primary thought in a true Believers' mind is to endeavour for peace, not at any cost to oneself , as instructed in the Book but on terms honourable and balanced with equity and generosity– adal bil qist and bil ehsaan.

Not to exceed the limits in all situations is a commandment of the Creator, as transgression would be selfishness affecting mankind's peaceful environment. The unity of His creation, the mankind, is referred here in 10-19. All previous Messengers propagated this message, a message of monotheism in modern language and usage. Alas! All such messages have been assimilated into Religionism/Theism!

In advantageous conditions achieved after the hostilities had stopped, mankind guided on the straight path, is asked to go that one step further towards behaviour that may be termed as altruistic, to maintain salaam.

Is not Islam, (which is just an Arabic word as given in Arabic Quran), named so for the above system – a code of behaviour - an Altruism with some what broader meaning of the term, difficult for a lay person to express in a compound sentence?

Why can't the linguists, scholars and doctors coin a non- Arabic word or a phrase at least in English for Islam so that one can use it in un-apologetic manner as a universal code for mankind and not as an insular Religion. Anyone then, not following the universally accepted moral and ethical code to the letter could be easily dubbed as an infidel, a universal criminal; a non-Muslim and or Muslim alike! Then one can boldly say that the likes of Alexander of Macedonia and Mahmood of Ghazni were in this reality all great Plunderers, hence infidels.

Recently an article by Kareem Aga Khan came close to rescue in this respect of naming Islam. He opined that instead of being a “monotheism” it is a “monorealism”. Everything in it relates to the reality of Human activity and its reaction to create heaven or hell on Earth by its actions. An environment of tranquility and harmony for all God's creatures can therefore only come from this monorealism's Altruism.

The constant pleading to the Ulamau' of Religion, to whom the Deen is but a Religion with capital R; to address the issue of misguided jihad and rightful struggle as given in Quran and its true import for humanity, is not only like asking the mischievous cunning Cheshire cat of Alice in Wonderland for guidance but also ask it to guard the basket of sardines, where the natural instinct of this class of creature is clearly known to want to devour them. As for guidance the creature is devoid of reality to do so as it is just a fictional animal!

For definition of Ulamau' it is best to refer to 35-27, 28. to realise how far removed is this class of people from reality and knowledge base, let alone the ability to delve into the scripture beyond its esoteric, regurgitated and literal meanings.

It is long pass the time to gather the A'lim, linguists, historians, archaeologists, astronomers, geographers, economists etc. to come on the table. A concerted effort is required urgently, like that of attending to present day Climate Change crisis and save the planet. Muslim world in particular is truly in dire crisis.

It is best to end this sad story on a supplication, that Muslims always resort to when the going gets tough. But an example of enlightened modern thinking, a gentleman's submission of his extended good wishes to his friend is quoted here:

If only Altruism is adopted universally with the monorealism of Islam.