It could be argued quite correctly that the above title has left out the word ‘Animal’ in it. But that is deliberate.

Mankind has been offering sacrifices ever since it formed a social community in the jungle and came under the spell of the Shaman who instilled fear of the spirits, deities and demons which demanded sacrifices from mankind in order to avert the naturally occurring catastrophe or for blessings of natural gifts. The more severe and intense these phenomena the more precious objects were required to be sacrificed; such as food, fruit, meat, blood and even human life.

It may be safe to say that no religion since has escaped this left-over and flow-on effect. Cruel sacrifices are still offered overtly or covertly where such belief systems persist.

The largest religious and legally sanctioned ritual of sacrifice of animals in the world is that enacted during the Muslim festival of Eidu-Adha, as an integral part of religious duty to appease the fearsome God, who once perhaps to test His Apostle Abraham/Ibrahim, demanded from him the sacrifice of his son; and then accepted instead the sacrifice of a lamb, which scrumptiously appeared at the site of the drama, thus sparing the life of the innocent child. 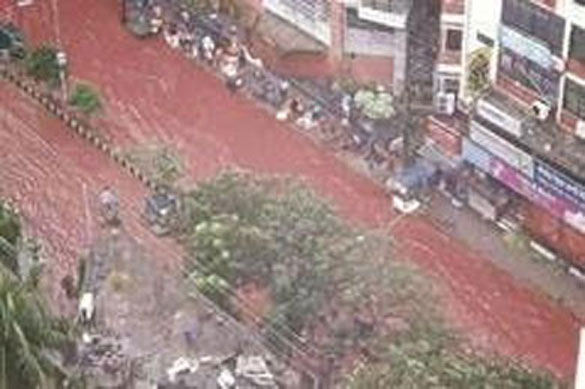 The rivers literally run red in the Muslim world to this day with millions of animals’ blood, to commemorate the drama. As happened in Dhaka Bangladesh:-

(Refer also. “Salinity and arsenic affect 60% of underground supply across vast Indo-Gangetic Basin, according to research published in Nature Geo-science”!)

The holy stage and the participants in the drama are a bone of contention among the two major religions claiming to be the source of the script. The Jews claim the site to be at the rock under The Dome in Jerusalem and the victim as Isaak. The Muslims on the other hand, with reference to Quran accept Ismail and the place Mina near Makka.

This being the case, it is necessary to examine the script with reference to Quran, in the statements related to the commandments associated with the legend of sacrifice of the animals to appease the very God, the Creator of the Universe who they claim still demands such sacrifices of flesh and blood. Thus spawning a very lucrative and huge cattle industry all over the world including the non-Muslim countries; to meet the demand of animals for slaughter. It is a Big worldwide business based on false interpretations:

2-79: Then woe to those who write the Book with their own hands and claim “this is from God” to trade in to make a miserable gain… The only problem is that the gain is not all that miserable. It runs in billions of dollars of business a year. And that is the Religious justification for the trade.

So what does the Quran, the Good Book say referring to what is now the largest industry in the name of Islam?

To begin with, can the question be asked if God has really demanded this blood and flesh and wasteful ritual of resource He has bestowed on mankind, to appease Him during the Hajj- the pilgrimage?

To start with the word Qurban/Qurbani is not a Quranic term. The word is الہدْیُ which is misrepresented as ‘sacrifice’, that first appears in 2-196:

2-196: …send a gift – Hadiya such as you may afford… to the place of hajj in case you are prevented from attending there yourself. Also to feed the needy and hungry. It appears variously in chapters 5, 22, etc.

Pagan practice of sacrifice as an offering to appease the Creator is not a virtuous act that pleases Him. He in other places says:

22-37: Not their flesh nor their blood reaches God but to Him what is acceptable is observance of duty on your part…

From the above it is established that it calls for a paradigm shift in the meaning of “worship”. The emphases have now shifted from the fearful “worship mode” of spirits, demons and deities, to practical “service code” for God’s creation.

By digging deep into ones pockets and parting with ones cherished possessions; such as domestic animals as they were the mobile wealth in olden days, to help others and feed them when they attend the pilgrimage at distant places, arriving there as lean and hungry travelers. This noble act of service requires the sacrifice of donating ones valuables such as money, time, wealth and possession in the service of others to please the Creator. Not necessarily an animal life as is the case with paganism.  جان جاے بکرے کی ثواب ملے کسی اور کو!

How best to express this than the inscription that is there on the archway of a monastery that reads: “In the service of others Oh Lord we worship Thee”!

How to reconcile the notion that comes from the Good Book that the Lord God the Creator of the heaven and earth and all that is in between, should ask for things that He himself has created, but now to be returned to Him by His creation the mankind, in order to appease Him- the angry fearful deity?

‘Fear God’ is the essential teaching of the Muslim theology. This is in spite of the fact that in the Quran, no less than one hundred and fourteen times the statement ‘in the name of God the most merciful and most kind’ appears. In addition there are numerous other places where these particular attributes of His are mentioned. What God is He that must be feared and appeased with the offerings of animal, flesh, blood and gore?!

In this day and age of concern for the increasing human population and sustainability of and conservation of planet earth’s resources, it is astonishing to notice the wastefulness of sacrifice. Waste of meat that takes place in this concocted religious business, selfishly promoted by the cattle industry. This is in despite the numerous statements in the Good Book decrying wastefulness:

7-81: …Nay you are the people exceeding all bounds.

Only in poor countries the ‘sacrificial meat’ is consumed by the needy and poor people! In the wealthy countries it mostly goes to waste. Animals are a gift of God. Mankind uses them as beast of burden, for nutrition and means of transport and even as show pieces of wealth, says Quran.

There are other issues associated with this business of sacrifice, which have been dealt with at other places and addressed by many other people on New Age Islam.

Suffice it to say that Quran calls for conservation of animal life and therefore has nominated a long period in which hunting is prohibited so as to give animals time to recover from the depletion of its population at the hands of mankind. Therefore, animals being also a community of creation, it is to be cherished and husbanded sustainably.

The example above of the pollution of the rivers in Dhaka caused by torrential rain during the ritual of “sacrifice” demonstrates the wider implications such as health of the city dwellers. This is not an isolated and Bangladeshi problem only but the whole Muslim world is beset with the stink of rotting offal and congealed blood in the streets at this time of festival, in spite of the fact that the requirement of animal slaughter is only at the place of pilgrimage-Hajj; and that too to feed the people attending there: an offering to pilgrims and NOT to the deity who does not even live in His windowless dark cubicle, cared for by the Custodians and collecting rent in His name.

This Pollution is no less than a problem like other industrial pollution in the world of callus commercialism as shown in the link bellow. It is an occurrence on daily basis that mankind needs to address, if it wants to live on a healthy planet earth and leave it so for its future generation to enjoy. 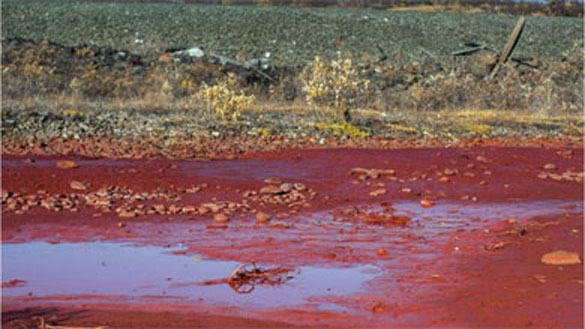