Polygamy: Religion Has Been Twisted To Fit the Needs and Whims of Men

On October 1, 2014 my article, The Problems of Polygamy was published in the Dawn. It presented two studies, one from the UAE and one from Malaysian that revealed how polygamous family arrangements were deeply detrimental to women’s emotional health. 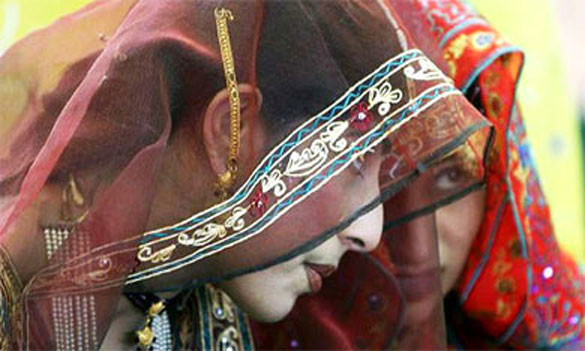 If the comments and letters are evidence, Pakistani men have discarded the second portion of the relevant clause on polygamy, the one that exhorts “perfect justice”. -Photo by AP

The Malaysian study also revealed just how imperfectly polygamy is in practice, focusing, in particular, on the neglect faced by children.

As soon as it appeared in the paper and online, I was inundated with letters, along with comments on the website. Most were predictably from men and of the sort that usually pour in when something is published about the suffering of women.

The article is “skewed” they complained because it was written from “a female perspective” (since only articles written by men and from a male perspective can ever be fair). Others, who undoubtedly did not actually bother to read the article, scolded for interfering with a “divine right” that has been granted to men, who in their view should be permitted to practice polygamy without any conditions at all. Several others pandered lies and misinformation, imagining women to be a greater percentage of the population than men, and proffering polygamy as an answer.

In actuality, the ratio of men to women in Pakistan is 100:90, meaning there are 100 men for 90 women. If anything, it is an argument against plural marriages; since numerically, it would prevent some men from marrying at all.

The most poignant reader responses came from women, many of whom had suffered, were suffering or feared they would suffer from a practice that enshrines inequality and is erected on the belief that rights belonging to men are unquestionable.

Indeed, if the comments and letters are evidence, Pakistani men have discarded the second portion of the relevant clause on polygamy, the one that exhorts “perfect justice”.

In this revised calculation, fairness is a whim, practiced with frivolity and not subject to the scrutiny of others.

The most touching response, which incidentally proved the premise of the Malaysian study, was not from a wife who was in a polygamous arrangement, but from a daughter whose father had chosen to take such a path.

Uzma (names changed to protect privacy) was born in a dysfunctional marriage, where her father routinely abused her mother.

Protective of her mother, Uzma grew up continually defending her from her father’s barbs and humiliations. Against this backdrop, she knew that the best way to avoid the fate of her mother was to insure that she herself was educated and eventually financially independent.

Her father has opposed her decision to study and was always intent on making further education impossible, threatening again and again to marry her off to an uneducated man. He also routinely complained that he was fed up of his old wife and was going to find a new one that would please him.

Recently, Uzma’s father did just that, going to a city far away from their own and marrying a young girl from there. He set up a new household with his new wife and now refuses to support either his first wife or the children from that marriage. The family does not know how to pursue the case in court (and Pakistani courts have proven routinely ineffectual in these matters). Uzma herself is trying her best to find employment but has had no luck.

The words she wrote revealed the deep anguish and despair that surrounds the family.

She ended with a question; if she were to kill herself, who would be the sinner?

Such is the reality of polygamy.

Uzma’s case is hardly isolated, in another letter, an angry man railed against the critique of polygamy. His story focused on a “friend”, a 65-year-old man saddled with a wife who had to have several surgeries, including a hip replacement. Owing to this, the woman could not satisfy her husband sexually.

In such a situation, he insisted, there was no choice, no option but for this almost 70-year-old man to get another wife because his desires deserved to be satisfied.

The world, or at least Pakistan it seems, revolves around the needs and whims of men, and like everything else religion has been twisted to fit that perspective.

The idea of a man disregarding his own needs to fulfil his duties is consequently, something that occurs to no one.

These stories and so many more were written by Dawn readers, they are occurring in the country, which has no legal or sociological safeguards in protecting women and children subjected to unfair and unjust marital arrangements.

Women on either side are caught in a vice of constriction and oppression; they can choose to remain single and bear the barbs and humiliations of a society that considers women without male protectors to be dangerous and worthy of degradation or to agree to unions where they are, by definition unequal, sentenced to a life of jealousy, manipulation and desperate wrangling for the attention of men.