'People of Other Religions Busy In Useless Activities During Religious Festivals': So Say Pakistan's School Books

LAHORE: National Commission for Justice and Peace (NCJP) has conducted a content analysis of the revised curriculum of Punjab and Sindh textbooks for 2012-2013 for inclusion of biased and discriminatory content against religions other than Islam. 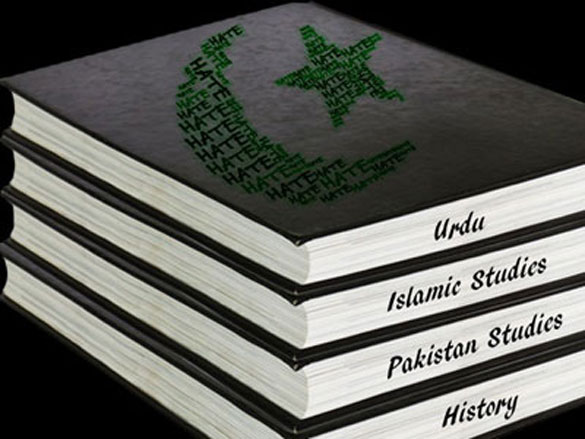 The findings reveal excessive use of the words Hindu, Christian and Jew while discussing the history of Pakistan and Islamic Studies, which portray the said faiths in a negative light.

For example, an Islamic Studies book of Sindh board for class 5, in a chapter on Eid (religious festivals), includes a line saying, “People of other religions usually stay busy in useless activities during their religious festivals. There is no concept of God or submission among them.”

The chapter “Pakistan, an Islamic State” in the same textbook of Punjab board includes this line: “Hindus harmed Muslims in every way.”

The content analysis has been published in Urdu to generate a debate on how the inclusion of discriminatory content in curriculum sows seeds of hatred, and to ensure that the review reaches maximum people.

Total number of chapters with biased and discriminatory content: 28 out of 204, which make up for 13.7% of the content.

Total number of chapters with discriminatory content: 22 out of 179, which make up for 12% of the content of curriculum.

The NCJP analysed that the syllabus being taught at government schools in Sindh includes a higher number of mentions which can be categorised as discriminatory. Number of chapters with discriminatory content in 2009-11 was 11, but in 2012-13 there are 22.

The marked increase is due to the addition of mentioned content in syllabus of Urdu for classes 9, 10, 8, 5, 6. However, the Islamic Studies book of class 7 and Pakistan Studies of class 8 do not include the discriminatory content from the 2009-2011.

The analysis shows that in 2009, the number of lines with religious bias was 45 and in 2012 the number is 122. Urdu and Pakistan Studies syllabus for classes 10, 9, 8 and 7 show a marked increase in discriminatory content.

In 2009, Urdu and Pakistan Studies books of the said classes included 15 lines with discrimination towards religious minorities, but in 2012, the number of such lines went up to 86, the NCJP reveals. Islamic Studies and Urdu syllabus include more content with religious bias. The Islamic Studies textbook previously did not include chapters with such content but now have three chapters each.

The content analysis recommends that students should be taught the role of religious minorities in Pakistan’s creation. Religious teachings should ideally be passed on to children at home through families.

In case, it is impossible for the state to exclude Islamic Studies from school curriculum, then the minority children should have a right to religious teachings as well, as per the Article 20 and 22 of Constitution of Pakistan. Therefore, the latter should be allowed to study teachings of their respective faiths instead of ethics.