Bangladesh A Mixed Bag of Ideologies; Islam Is Manifestly Strong with The Sufi Version and The Wahhabi Version Catching Up Fast

Bangladesh is a cluster of contradictions. Population-wise, it is 90% Muslim, and yet it shies away from officially designating itself as an 'Islamic' country, preferring to be the 'People's Republic of Bangladesh'.

However, its constitution begins with the Islamic phrase 'In the name of Allah, the Beneficent, the Merciful'. And Article 2A explicitly says that the State religion is Islam. Adding to that, Prime Minister Sheikh Hasina has declared that 'Bangladesh will be governed in line with the spirit of the Constitution of Medina,' which embodied the virtuous Islamic code of governance. 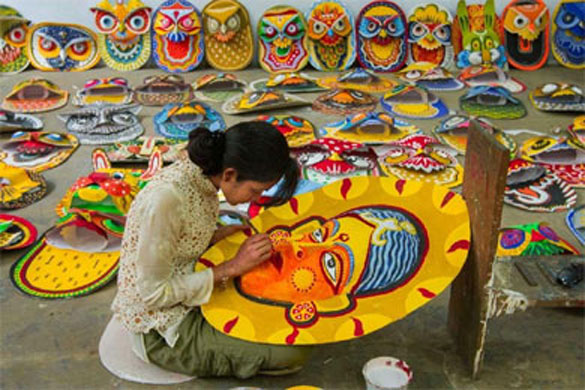 Having said that, Art 2A also ensures 'equal status and equal rights in the practice of the Hindu, Buddhist, Christian and other religions.' Bangladesh is actually a mixed bag of ideologies. The hold of Islam is manifestly strong with the Sufi version being predominant and the Wahhabi version catching up fast. But there is much more tolerance of other faiths in Bangladesh than in most Islamic countries. Although just 10% of the population, Hindus are in high places in the professions if not governance. At least among the elite and the upper middle classes, there is no strict adherence to Islamic social and dress codes which have now become characteristic of avowedly Islamic countries. Actually, the elite and the upper middle classes Bangladeshi Muslims are indistinguishable from their Hindu Bengali counterparts. Bengali adjuncts to Arabic personal names are quite common.

But the masses, especially in the rural areas, remain conservative, predominantly wedded to Sufi Islam. When the award-winning Bangladesh film maker Tanvir Mokammel was asked if Bangladesh is Islamic or secular, he said: ' The government is secular but the people are Islamic!'

In his paper 'Islamism beyond the Islamic heartland: A case study of Bangladesh' in 'The Politics of Religion in South and Southeast Asia', edited by Ishtiaq Ahmed (Routledge Contemporary Asia Series 2012) Taj Hashmi points out that Bengali Muslims, throughout history, had been syncretistic until their exposure to Wahhabi movements and mass participation in anti-landlord (and thereby anti-Hindu) and anti-colonial movements and 'jihads' in the 19 th. Century.

For the past two centuries Bangladeshi Muslims have been going through a metamorphic process, struggling between their Bengali and Muslim identities, Hashmi points out. The roots of Islam are deep, with mass conversion taking place from the 16th.Century onwards due to the appeal of a number of Sufi saints.

But the peaceful nature of the transformation and communal harmony was upset by the British through the 'Permanent Settlement' introduced in 1793, Hashmi points out.

'The (Permanent) Settlement installed classes of nouveau riche parasitical people – more than 90 percent Hindu, mostly traders, moneylenders and revenue officials— as landlords. The Muslim aristocracy, unemployed soldiers and judges, impoverished peasants and idle weavers suffered most under the new land system. While the landlord's revenue liability to the Government was fixed permanently, his tenants were subject to arbitrary enhancement of rent and numerous illegal exactions. Hindu landlords resorting to various modes of torture and public humiliation of their tenants are legendary, as are the accounts of Muslim peasant resistance,' Hashmi recalls.

Following pauperization, Bengali Muslims set up or joined some of the most organized millennial 'jihads' in India. 'Thousands of Bengali mujahedeen fought against the Sikh rulers in in the Punjab, Kashmir and northwestern India during the 1820s and 1840s, and then, after the British occupation of the Punjab, against the British up to the 1860s with the goal of restoring Muslim rule,' Hashmi says.

However, at the beginning of the 20th century , with the Hindus beginning to ask for self- rule, the British encouraged the disaffected Muslim elite of Bengal to raise their voice for their rights, which led to the formation of the Muslim League in 1906 in Dhaka. When the Pakistan movement picked in the 1930s and 1940s, Bengali Muslims were in the forefront of it. 'During the Indo-Pakistan War of 1965, East Pakistani Muslims not only wholeheartedly supported Pakistan against India, but Bengali soldiers of Pakistani armed forces also fought gallantly, defending their 'motherland' against Indian 'aggression'; scores of Bengali Muslim writers composed patriotic songs and plays,' Hashmi says.

However, by the end of the 1960s, resentment was growing over the economic inequities in Pakistan with the Bengali Muslims getting step-motherly treatment from the dominant West Pakistani elite. There was an unwillingness to recognize the electoral majority obtained by the Bengali nationalistic Awami League. And there was murderous military repression which led to an open call for an independent Bangladesh. The goal was attained with Indian military help in December 1971.

However, in August 1975, founder Sheikh Mujib's regime collapsed with his killing by a group of disgruntled junior army officers. His bad governance, over dependence on benefactor India, and installation of one-party rule, alienated a new group of nationalists who were Islamic. Military rulers Generals Ziaur Rahman and H.M.Ershad represented this 'Muslim Bangladeshi' stream, which was anti-India and covertly pro-Pakistan. The constitution was amended to make it manifestly Islamic to assert Bangladesh's identity vis-à-vis India and also to legitimize their rule among the deeply religious masses.

29 people, including 18 foreigners, were killed when five local militants attacked the Holey Artisan Bakery in Dhaka on July 1, 2016

Certain regional and global factors were also responsible. Perceived Indian hegemony, the Afghan war and the War on Terror, all contributed to a rise in the use of Islam as a rallying point and a defensive and offensive weapon.

From 1999, violent Islamist extremism had become a part of the Bangladeshi political landscape. Extremist and violent Wahabi Islam began to take root with the exposure of Bangladeshis to that brand of Islam while working Saudi Arabia. The Afghan war, the War on Terror, and the oppression of Muslim Rohingyas in Myanmar increased the scope for militancy, which led to the emergence of many Islamic terror groups with links to Pakistan and other world hotspots of militant Islam. There were moves to set up an Islamic Bangladesh with the Shariah as the basis.

Violence was unleashed on a large scale against secular and left-wing persons. The targets included Sheikh Hasina herself. Khaleda Zia's Bangladesh Nationalist Party (BNP) tied up with the Jamaat-e-Islami and won elections. This set off alarm bells in the secular Awami League. The Awami League then began to cultivate Islamic outfits, yielded to some of their demands and also introduced some Islamic elements in the constitution even as it prosecuted and hanged Islamists who collaborated with Pakistan in committing atrocities during the liberation struggle and went ruthlessly against Islamic terror outfits. When a group of educated boys massacred diners in an elite restaurant in Dhaka in 2016, Prime Minister Hasina showed no mercy. She handed over to India insurgents who the previous BNP regime had given refuge to.

By building its political image around the liberation struggle but at the same time acquiring an Islamic character without damaging its credential as a secular party, and promoting economic development vigorously, the Awami League has been able to remain in power continuously since 2008

Since the advent of the Awami League under Sheikh Hasina as a single center of power in 2008, and the sharp decline of Khaleda Zia's BNP due to lack of leaders, extremism has disappeared from the public domain.

But this is also partly due to the careful and incremental accommodation of the extremist interests by the Awami League, Hashim says. Hasina had sought the help of the Jamaat-e-Islami at one time and politically gained by it. At the instance of Islamists, her government had recognized certificates given by the Madrassahs or Islamic schools. At the instance of Islamists, she had removed from the list of readings for school children, some well-known Hindu authors. But at the same time, she has encouraged the celebration of the Bengali New Year PahelaBoishak and has been accommodative towards the Hindus in a fine and pragmatic balancing act.