Ertugrul Mania: Faked History Fuels Revivalist Dreams and Suggests the Way Forward Is Through the Sword

A TURKISH drama series brimming with tribal intrigues, blood, murder, and conquest — all wrapped in pious religious idiom — has taken Pakistan by storm. Filmed in Anatolia, Dirilis: Ertugrul is a 150-episode fictional account of Ertugrul Ghazi, father of the Ottoman Empire’s founder. As of yesterday (Friday), the YouTube count for the 30th Urdu-dubbed episode had already clocked up 5.5 million views on Pakistan Television.

Even those who made Dirilis are astonished — and hugely pleased — at its tumultuous welcome. Tribal Turkmen fighting for a homeland can’t be expected to capture the imagination of millions in some far-off country. But Pakistan is different. Transfixed, entire families are spending evenings watching it together. They think it is wholesome entertainment and genuine Islamic history.

What history? This is a free-wheeling caricature of 13th-century Anatolia of which we know next to nothing. Facts are not important, says Mehmet Bozdag, the man who wrote and produced the series. To quote: “There is very little information about the period we are presenting — not exceeding 4-5 pages. Even the names are different in every source. The first works written about the establishment of the Ottoman State were about 100-150 years later. There is no certainty in this historical data… we are shaping a story by dreaming.” 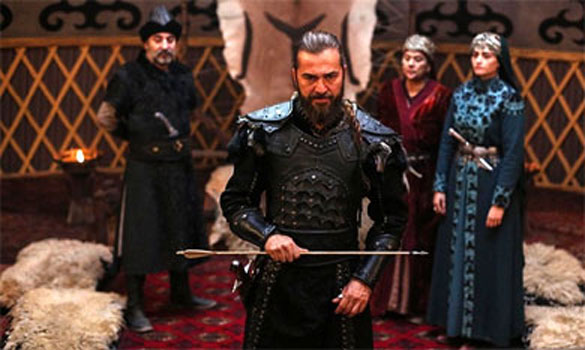 That this serial is frankly propagandistic and ideologically motivated is beyond doubt. It has been manufactured for a purpose. But what purpose?

If it seeks to project Islam as a religion of peace and to counter Islamophobia, then the very opposite is achieved. The first scene of the first episode begins with sword-making and sword-sharpening in the background of nomadic tents. The tribe’s adversaries are Christians and Byzantines whose bloodied bodies lie scattered here and there after every fight. The hero, Ertugrul Ghazi, not only beheads several Knight Templars but also former associates from his tribe, such as Kurdoglu Bey, who he suspects of disloyalty.

Should we be surprised if IS-like organisations find this inspirational? Is glorifying the sword glorifying Islam? Islam can surely be represented in ways more positive than putting a spotlight on power struggles within a tribal society. Far better, for example, would be to build upon Turkish scholars like Ali Qushgi, Taqi-al-Din, or Al-Jazari. Without Islam’s early scholars the colorful tapestry of Muslim culture — and Turkish culture as well — would have been far poorer, its claim to being a great world civilisation weak and unconvincing.

I suspect Dirilis’s real goal is less about Islam and more to vent Turkish nostalgia for a long-lost empire. Production demanded massive funding by the Turkish state. A horse farm was created, together with a special zoo-like area for the sheep, goats, nightingales and partridges that appear on the show. A Hollywood stunt team was hired to train actors for the movie’s staged fights. Erdogan and his family have repeatedly visited the filming site.

Understandably, from within the bastions of Sunni Islam the reaction to this blockbuster has been fiercely negative. Both the UAE and Saudi Arabia have condemned and banned the series, and Egyptian authorities have issued a fatwa decrying this “insidious attempt to re-impose Turkish tutelage” over Arab countries formerly under Ottoman rule. Currently, Saudi Arabia is reportedly funding a $40m counter series called Malik-e-Nar of which trailers have already been produced. Though inadequate it does make the point: Arabs cannot celebrate Turkish imperialism.

Most peoples don’t like invaders, but Pakistan’s psyche is somehow special. Perhaps overwhelmed by Erdogan’s aggressive style, Prime Minister Khan proudly tweeted that Turks had ruled India for 600 years. Historians will raise their eyebrows — this is between quarter-true to half-true only. But it must be rare for a prime minister to hail imperial rule over his land.

Khan is not alone. Pakistan celebrates all post-eighth century invasions beginning with Mohammed bin Qasim’s conquest of Sindh in 712 AD. Urdu novelist Nasim Hijazi’s books, devoured by millions, are an ode to the Arab conquest of India. Like filmmaker Mehmet Bozdag, Hijazi’s strength lay in creating imagery unconstrained by facts.

How should one look at ancient invasions and imperial conquests? To laud or vilify them is equally irrational. India is a stunningly clear example of just how much a society can degenerate if it does that. Hindu revivalism is fixated upon the wicked foreign invader who shattered the seraphic heaven of Mother India. Suddenly all Muslims and Christians became unwelcome. As Narendra Modi’s right-hand man recently declared, foreigners are termites infesting a poor man’s grain store.

But do Hindutva’s mindless ideologues not know that all human civilisation began in Africa and there is no such thing as son of Indian soil? That every single human society on earth today is the result of countless conflicts, wars, and foreign invasions over tens of thousands of years? That even precision DNA tests cannot tell the difference between Hindus and Muslims? These basic lessons are for all, not just Pakistan’s rulers.

A mature attitude towards ancient foreign invasions would be to simply accept them clinically as facts of history. They should be investigated and absorbed without either glorification or condemnation. Doing otherwise is utterly pointless. No one living today can be held responsible for the actions, good or bad, of his or her ancestors. Moreover the mists of time have forever hidden true facts from view.

The creators of Dirilis: Ertugrul want us to wallow in the past glories of others and celebrate imperialism. Hook, line and sinker, we are mindlessly swallowing their proffered bait. This poisonous substance can only reinforce the dangerous delusion that going forward actually means going backward.

Instead, the way forward is to ask that Pakistaniat spring from Pakistan’s native soil. It must be rooted in the diversity of all our peoples and historically formed cultures. The year 1971 showed decisively the limits of pan-Islamism. Aping Saudi culture failed to create a viable Pakistani identity; aping Turkey won’t get us much further. Instead a strong national identity can emerge only if Pakistan embraces pluralism, accepts that Punjab is just another Pakistani province, and helps all citizens achieve a sense of belonging based upon a commitment to equality and justice.