Sufism: For the Love of Islam

Once upon a time, Mevlana Jalaluddin Muhammad Rumi was presented with a question. The year was around 1244, in Konya (a city in present-day Turkey). Someone shook Rumi from the comfort of his own ensconced thoughts to ask him a question: 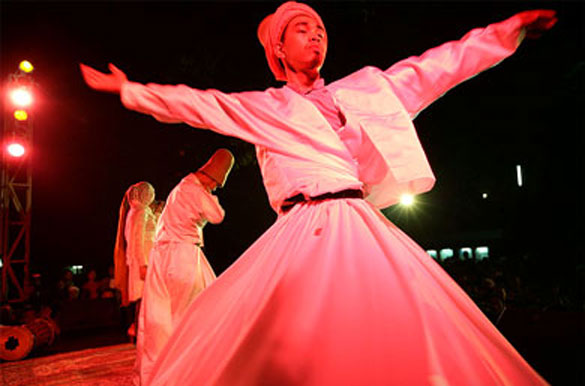 Who is the more powerful? The Prophet who prayed, ‘We have not known Thee as Thou deservest to be known’, or Abu Yazid, who exclaimed, ‘How glorious is my power; my dignity is unsurpassed’?

The mystic who posed this question was Syamsudin Tabriz.

The query moved Rumi into deeper discussions about finding The Love, God. Syam and Rumi grew to become close friends. One day, however, Syam disappeared. Some said he was murdered by the people of Konya who were jealous of their friendship. Filled with grief from the loss of his dear friend, Rumi evolved from merely processing explanations of The Beloved, to living, breathing and acting on behalf of The Beloved through dance, art, poetry and dhikr.

Rumi wrote in his poem Description of Love: ‘But love unexplained is clearer… When the discourse touched on the matter of love. Pen was broken and paper torn.’ To know love, we actually make an effort to expose ourselves to suffering and difficulties.

Working for something we already feel entitled to, such as love, feels counter-intuitive. We imbibed in our childhood tales of damsels in distress rescued by valiant warriors, or mighty knights fighting for the honour of their maidens. Stories full of serendipity and happenstance.

Even the love of our parents, philosopher Alain de Botton has suggested, seems so effortless that it makes us think that love requires no work.

As creatures who seek meaning, we tend to attach weight to coincidences. Lulled by them, we sometimes forget that love does not magically happen – nor is it written in the stars. 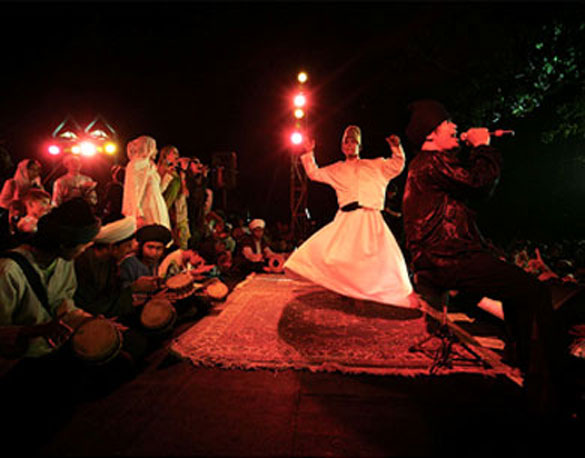 In the beginning, there was the Higgs boson; a star explosion. The ‘God particle’. Ibn Arabi stated that love was the motive behind God’s creativity in creating the world. He manifests His attributes in all things and ‘He is with you wherever you may be’ (Al-Hadid 57:4). When all is good in the world around us, it sparks a sense of deep love that naturally drives us to seek more – just like when we fall in love with someone.

A glistening river at night; the sparkling reflection of the moon; frothy water reflecting the colourful life beneath. Love sends us deeper into a degenerated state. In his book Sufism, William C Chittick wants us not to deny love. He even writes that we should savour the ‘inadequacy’ that comes with it, for it yields a deep longing of the soul. Rumi simply calls it ‘pain’. ‘Whoever is more awake has greater pain,’ he said. The Qur’an states in 35:15, ‘O people, you are those in need of Allah, while Allah is the Free of need – the Praiseworthy.’ Our inadequacy spurs us to seek ideals. This is the reason why Sufi scholars have defined Sufism’s objective as the reparation of the heart and turning it away from all else but God.

What Love Could Be

The journey to understand love is never easy. Nevertheless, humans always try. We ask Candra Malik, a Sufi who is active on the internet (@candramalik). He also participates in youth events, Sufi classes held in various provinces of Indonesia, and concerts.

Candra has just launched his latest book,Makrifat Cinta (Wisdom of Love), and contributes the song ‘Syahadat Cinta’ (Shahadah of Love) to the original soundtrack of the film Cinta Tapi Beda(Love but Different). The film puts forth the tangles found in an interfaith relationship, directed by renowned young director Hanung Bramantyo.

Candra writes in Makrifat Cinta that she or he who knows herself or himself will know Allah. The phrase awwaludin ma’rifatullah suggests that we see and understand Allah through our memory, sight and imagination. That we need to track Allah’s signs, and look for His evidence. Richard Dawkins, an ethologist and biologist, once wrote to his 10-year-old daughter that it is a ‘bad argument’ to say that love can exist only with deep feelings. He told her about the outside things to look out for: ‘…looks in the eye, tender notes in the voice, little favors and kindnesses; this is all real evidence’.

In the realm of Sufism, Candra explains love with ‘Shahadat Cinta’: I witness, there is no love besides longing, and I witness, You are my lover.

The Shahadah uses the word ‘witness’ because it is more than just words. It involves vision, listening, presence and feeling. The role of a witness is an intimate one. We do not say ‘I vow’, ‘I state’ or ‘I pledge’. We say ‘I witness that there is no God except Allah’. The Shahadah isn’t only a sweet statement that we can say; it is also applied in our daily lives as we make our way to meet The Beloved.

To sharpen our perspective on love, Ibn Arabi, the Sufi mystic of Arabia, said that love needed to be tasted and experienced. Many people are familiar with dervish whirling dances, Dhikr, and other Sufi art forms. Candra explains that the essence of Allah can be witnessed with these four Arabic adjectives: Jamal, Kamal, Quhar and Jalal.

‘Jamal’ reflects Allah’s character of beauty, which is related to art.

‘Bismillah Hir Rahman Nir Rahim’, meaning ‘in the name of Allah, the Most Compassionate, the Most Merciful’ states His grandeur in grace and love – supreme qualities that encapsulate the ultimate in glory (Jalal), perfection (Kamal) and power (kohar).

Muhammad Revaldi (Aldi), 35, experiences the love of God through whirling dances. He teaches dervishes at Rumi Cafe in Kebayoran Baru, Jakarta. Aldi feels that love impels his body to move, softening the skin and quivering the flesh. He says this art form helps him to feel Allah’s presence. With one hand pointing upwards and the other hand open and directed outwards towards the audience, this hand coordination symbolises Allah’s blessings distributed by the dancing dervish to friends, folks, and all mankind.

The beauty of this dance is also in the interminable blessings that the audience receive. Aldi shares that the feeling of ecstasy from the whirling dance isn’t like that from alcohol or drugs. He says that one is still capable of their own consciousness during a whirling dance. One can stop at any time and walk in a straight line if one wishes to.

Even happiness is a cycle where the happy feeling itself is not always the most important. To keep the cycle healthy, it helps to get out of our comfort zone and keep moving, never staying static for too long. When we are drunk and high from love and do not want to move from that state, we will forget our responsibilities.

Candra believes that there should be proper distance in a balanced relationship. When a person is too close we cannot see them. If they are too far, we cannot see them, either. Being too close until we lose our consciousness means neglecting our duties in this world – just like drunkards who do not care about their surroundings.

God trusts us with our acumen that we use to judge and make decisions. He gives us free will that we can use with cause and effect. This concept is present in all belief systems.

Consciousness is not only required to keep one’s feet on the ground; it is also needed to discern real love. The love and passion we have for nature, friends and family are metaphors of our love for God. This was what made Jesus leave his family and Buddha leave his palace.

A veil is not only a piece clothing. It can also be a cover or a disguise. Sunshine is not the sun itself, nor is moonlight the moon. In one of his poems, Rumi wrote: ‘Faulty knowledge does not know the difference. It thinks lightning is the sun’. An exquisite piece of silk can create an alluring appearance, but this is merely a reflection of love. With that in mind, we had better not be distracted and misled.