Why The Uniform Civil Code Demand Does Not Cut Much Ice With Muslims Any More?

2.    Muslims of Goa never raised voice against the UCC.

5.    All India Muslim Personal Law Board  (AIMPLB) has become a spent force. 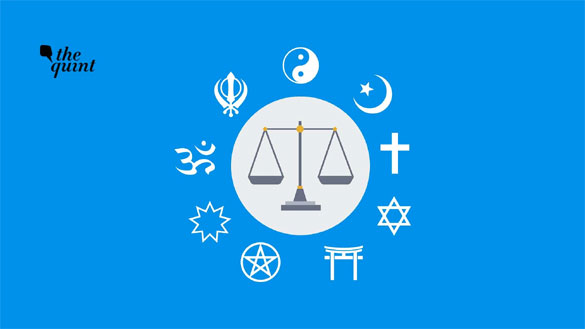 After the Dhami government of Uttarakhand in India announced that it has formed a panel to prepare the draft of the Uniform Civil Code, the Uttar Pradesh government has also expressed its resolve to implement a common civil code in the state. This has stirred a new debate in the Uniform Civil Code. The debate on the implementation of a uniform civil code has been started after the rise of the BJP on Indian political scene though it is not a plan envisaged by the BJP but mentioned in the Constitution of India in the Article 44 which says that the State shall endeavour to secure for the citizens a uniform civil code throughout the territory of India.

Since, the BJP has made the UCC a political ploy, the minorities, particularly the Muslims are apprehensive of the motive behind it. They think that in the name of implementing a uniform civil code, a majoritarian law will be imposed on them that will jeopardise their existence as a free religious community.

But a fact that has been ignored by the common Indians and particularly the Muslims is that in Goa, a uniform civil code is already in place since 1867 and after its independence from Portugal, this uniform civil code has remained functional through Section 5(1) of the Goa, Daman and Diu Administration Act 1962.

Under the Uniform Civil Code in Goa the Hindu Marriage Act 1955, Hindu Succession Act 1956 and the Indian Succession Act 1925 or Shariat (Application) Act 1937 are not in force. Interestingly, the Uniform Civil Code of Goa is based on Christian teachings. Yet Muslims of Goa or Muslim organisations like the AIMPLB never objected to it, leave aside demanding its annulment.

The union government has long been working on its draft and the Law Commission is preparing a draft for UCC. Indian Muslim organisations like the All India Muslim Personal Law Board, Jamiat-e-Ulema Hind, Jamat-e-Islami Hind and Indian Muslim League have opposed the UCC. They argue that India cherishes the idea of Unity in Diversity not of Unity in uniformity. A Uniform Civil Code will be based on Hindu laws and will be imposed on Muslims just as the Uniform Civil Code of Goa is based on Christian Laws.

However, in recent years, the opposition of Muslims to the UCC has become less vociferous and has reduced to formal press statements opposing it.

For example, after the announcement of Uttarakhand government on the UCC, no Muslim reaction was seen. The Jamiat-e-Ulema Hind and Jamat-e-Islami have not issued a fresh statement since 2016 and 2018 respectively. The Indian Union Muslim League have issued a statement opposing it. Only the AIMPLB has been actively opposing the UCC. Therefore, Muslim opposition to the UCC has been formal and has no teeth.

As for the opposition by the AIMPLB, it has lost its credibility among Muslims after it lost battles for Babri Mosque, Triple Talaq and Hijab and is a spent force. As for the common Muslims, the fear or concern over the implementation of the UCC has receded. The reason is that Muslims are faced with survival issues and the issues of identity become secondary. During the lockdown, the economic hardships have made Muslims more focussed on survival than on identity issues. The symbolic fight to save the Babri mosque wielded another blow to him. The triple talaq and hijab verdicts are to him a step forward towards the UCC. So he wonders what more can a UCC do to his religious identity. The increasing of the marriageable age for girls was another step towards an UCC.

The current wave of Islamophobia in India has made Muslims more concerned about their livelihood and survival. The calls of economic boycott, mob lynchings and attacks on mosques have added to their problems. The Covid-19 is another factor that has contributed to his pessimism.

These are the factors that have made Muslims passive over the UCC and they do not see it as a greater threat. They see that the triple talaq law has not made much difference to their lives. The increased marriageable age of girls is not an issue only for Muslims but for all the communities living in India. Child marriage is more prevalent in Hindus. The laws on the use of loudspeakers in places of worship will apply to Hindus as well and azan without loudspeakers does not mean a ban on azan. Its only that the Muslims will have to go back to the old days of azan without loudspeakers.

This is the reason that Muslims now don't show any strong opposition to or fear of the UCC.

Now Himachal Pradesh has also joined the UCC bogey but the JDU in Bihar has strongly opposed its ally BJP's call to implement the UCC in Bihar.

Actually, the implementation of the UCC in a diverse religious and ethnic society of India will be a big challenge and preparing a draft that can be acceptable to all the communities and tribes will be very difficult for the government. It will open a Pandora's box when implemented. Therefore, the fear of the Muslims that it will affect only them is unfounded. Despite the recommendation for the UCC in the Constitution, it could not be implemented because of the diversity of the Indian culture. Instead of raising a hue and cry, Muslims should wait and watch.