1.    3.20 thousand Rohingyas have already been shifted to Bhasanchar.

3.    Rohingyas do not want to be shifted to the dangerous island.

4.    Rohingyas do not want to go back to Myanmar. 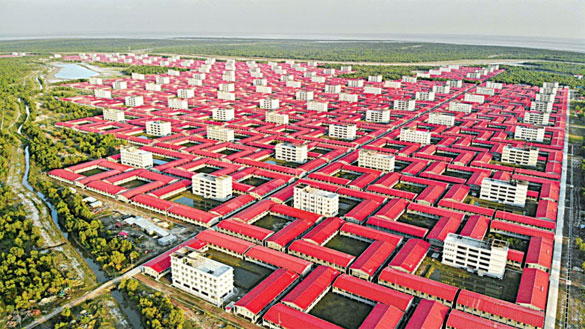 This file photo showing the aerial view of Bhasan Char shows a portion of the housing facilities that has been built on the island to relocate the Rohingyas from Cox’s Bazar. Photo: Star/File

The plight of nearly 9 lakh Rohingya refugees just does not seem to come to an end. As the world community does not have a solution and the Myanmar army Tatmadaw still in control, Rohingya refugees have to suffer in the Bangladesh refugee camps. Majority of them have been lodged in refugee camps in Cox Bazar but in 2020, the Bangladesh government decided to shift some refugees to an island named Bhasanchar 60 kilometres away from the mainland.

On 27 May 2022, the Hasina government decided to shift another one lakh Rohingyas to Bhasanchar which is like an open air prison where they do not have freedom of movement and opportunity for livelihood. Sea storms are a constant threat. Last year the UNHCR had entered into an agreement with the Bangladesh government in order to help the refugees. The UNHRC has promised to provide financial assistance worth $881 million but only 13 per cent of the promised account has reached them.

Earlier the UN and humanitarian groups had raised objections to the shifting of Rohingyas to Bhasanchar as they were not convinced of the habitability of the island. But defying objections from the United Nations and humanitarian groups, the Bangladesh government had shifted more than twenty thousand Rohingya refugees from Cox Bazar refugee camp to Bhasan Char Island on navy ships. These refugees reportedly had agreed to shift to Bhasan Char.

But the United Nations had expressed reservations over the safety and security of refugees on the island. It had sought permission from the Bangladesh government to carry out technical and protection assessment but the Bangladesh government did not gve it the permission. This had raised serious concerns over the security of refugees on the island. The Human Rights Watch had described it as a De Facto Prison Island. The island can be reached after 3 hours of journey by boat. This makes the island an open prison.

In November 2020, the Bangladesh government had taken 40 representatives of 22 NGOs to a guided tour of the island. They reportedly expressed satisfaction on the arrangements on the island.

The Bangladesh authorities claim that from the accounts of refugees shifted earlier, the refugees have learnt about the satisfactory arrangements in Bhasanchar and so many Rohingyas have voluntarily shifted to the island.

However, earlier the refugee women who had been taken to the island against their wish had said that arrangements of food and living conditions there were very poor. The security personnel appointed there even molested some women. They complained that the water provided to them was dirty. They wanted to return to the Cox Bazar camp. 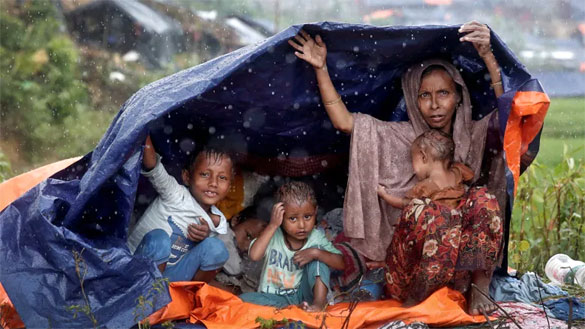 The UN had said that without the technical and protection assessment, it cannot determine it can start its operations there.

According to the human rights agencies, the Rohingya refugees do not want to go to Bhasanchar but the authorities intimidate them and force them to go to the island. Those who have been shifted there do not want to stay there and some of them try to escape to Malaysia by boats but they are captured by Bangladesh navy. They are then booked under various laws. They are caught between the devil and the deep blue see.

The refugees are concerned that those who will shift to Bhasan Char will not be able to meet their relatives living in camps in the mainland.

Some NGOs have been working on the island but they struggle to get funds.

In the Cox Bazar refugee camps, many refugees run their own shops or do small jobs to make a living. But on the island they do not have that freedom.

Bangladesh government decided to shift the Rohingyas to Bhasanchar because the Cox Bazar refugee camps are overcrowded and criminal gangs operate there taking advantage of the crowd. Often there are clashes between rival groups and killing.

The Rohingya terrorist group is also active in the Cox Bazar camps. They run extortion racket and kill those who oppose their extremist ideology. That was also the reason Bangladesh government decided to shift the refugees to the island. But the refugees face many problems in Bhasanchar. In times of emergency, like clashes between criminal gangs in the refugee camps in Cox Bazar, refugees would escape to other camps to take shelter. But in Bhasan Char, they won’t be able to escape if there is bombing or arson between criminal gangs. They will simply be at the mercy of the criminals, extortionists and terrorists.

The concerns raised by the UN, Human Rights Watch or the NGOs are not unfounded. In the refugee camps in the mainland drug mafia like Munna gang or Rohingya terrorist group ARSA are active. Due to poor security arrangements in the Cox Bazar refugee camps, often there are incidents of abduction, murder, extortion and arson. They have made the life of the refugees a hell. The Bangladesh government has not been able to clear the camps of the drug mafia or terorists because the police and the security personnel are on their payroll. 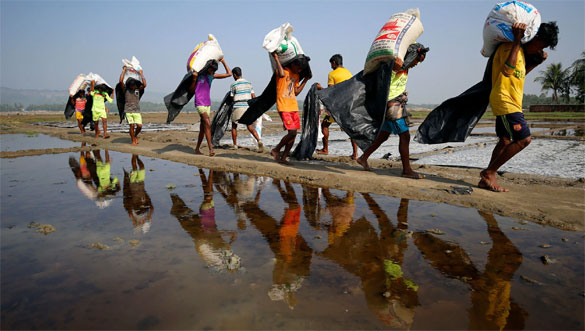 The twenty thousand Rohingyas who have voluntarily shifted have shifted to Bhasan Char because the camps in Cox Bazar were over overcrowded and because of murder, abduction, arson and extortion by the criminals and terrorists active in Cox Bazar camps. But at Bhasanchar, they have different problems. They cant go and meet their relatives in Cox Bazar mainland camps. They cannot do their own jobs and earn a living.

The Bangladesh government wants to shift the Rohingyas because it is not sure when their repatriation will take place. The Myanmar government has razed the houses of Rohingyas in Myanmar and built army and government complexes there. The remaining Muslim population live under constant threat from the Myanmarese army and Buddhist militants. The Rohingya refugees do not want to go back to Myanmar because they fear the situation is not favourable yet.

The Bangladesh government therefore fears that if the Rohingyas remain in the country for decades, they may cause a demographic change in the country and may have adverse effect on economy and culture. This is the reason, it does not allow Rohingya children to enroll in the schools in Bangladesh. It wants to keep Rohingyas away from mainland. As the world community remains silent spectators, there is no end to the plight of 9 lakh Rohingya refugees in Bangladesh.