1.    Till late 20th century, loudspeakers were not used for Azan.

2.    The trend of azan on loudspeakers caught up after 70s.

3.    Until the 70s, mullahs called the loudspeaker the devil's voice.

4.    Gradually more and more loudspeakers were used for azan.

5.    Later loudspeakers began to be used for relaying sermons or prayers outside the mosque. 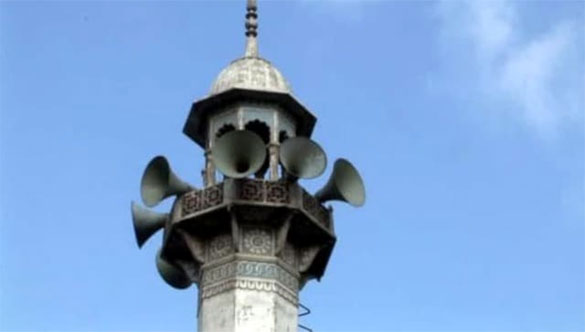 Islam stresses on sincerity and inner purity in matters of Deen. It opposes pomp and show in religious observances.

Azan, one of the Essential Religious Practices of Islam was, therefore, remained an unnoticed and non-controversial practice of Muslims because it was called by a muezzin from the top of the Azangah without a loudspeaker. A human voice, however loud can not cause any disturbance and so the non-Muslims never had any problem with it.

When the loudspeakers came into vogue around the 70s, the mullahs, averse to anything scientific and technological called the loudspeakers the devil's voice (Shaitan Ki Awaz) because during those times, loudspeakers or sound amplifiers were mostly used for playing film songs.

But gradually, the Muslim community found out its utility in religious practices. Growing population and growing affluence necessitated the use of loudspeakers for azan. It also gave them the air of modernity and the Muslims also adopted it to show to the majority community that they did not lag behind in technological progress.

But in the 90s, Shiv Sena supremo Bal Thackeray started opposing azan on loudspeakers. He had said that he could not tolerate azan on the loudspeaker for three seconds, leave aside for three minutes. Since he had extremist views on Muslims, the Muslims largely ignored his opposition considering it his own communal views based on political agenda In later years, rational people from both the communities started speaking against the rampant use of loudspeakers on religious festivals and cultural events and a general consensus on the use of loudspeakers among the polity emerged.

In 2000, the Supreme Court said that no religion or religious community could claim that the use of loudspeakers for worship or prayer or for celebrating any religious festival was an Essential Religious Practice protected under the Article 25 of the Constitution.In 2009, the Supreme Court passed a judgment regulating the use of loudspeakers in public places.

Since the courts had placed restrictions on the use of loudspeakers from 10 P.M. to 6 A.M. only the morning azan came under the restriction. However, the azan of Fajr (morning) went as usual as non -Muslims did not raise an objection to it. The restrictions on the volume of the loudspeaker was also not followed. The sound of azan blared from six to eight loudspeakers from the mosques five times a day including the morning azan. During the Ramadan, apart from azan, the announcements waking up the Muslims for Sehri was also made continuously for one and a half hour, disturbing the sleep of the non-Muslims of the locality. Apart from the announcements, religious poems were also recited causing a nuisance to the ill, the elderly and the children.

This gave right wing Hindu organisations an opportunity to further their communal agenda. They started opposing azan on the loudspeakers. But their voice was strengthened by secular Hindus who raised their genuine concern over the azan on loudspeaker on the basis of their personal experience. In 2017, famous Bollywood singer Sonu Nigam, not known for his communal bias, objected to the azan on the loudspeaker and termed it "forced religiousness". Instead of empathising with him and doing introspection, the Muslims unleashed a villification campaign against him. Worse, a mullah announced a reward of Rs 10 lakh on anyone who shaved Sonu Nigam's head. In response, Sonu Nigam himself shaved his head.

Recently, the Vice-Chancellor of Allahabad University, Sangita Srivastava complained to the DM that the dawn azan on loudspeaker disturbed her sleep. In2020, the Allahabad High court had ruled that no religion advocates the use of loudspeakers for worship. The petitioner had challenged an administrative order in the Jaunpur district of UP where the use of loudspeaker for azan had bee banned. This indicates that even secular non-Muslims also opposed azan on loudspeakers.

In 2021, Karnataka High Court curbed the use of loudspeakers in religious places.

In March 2021, the Karnataka State Board of Awqaf issued a circular to all the mosques and Dargahs of the state prohibiting the use of loudspeakers between 10 PM to 6 AM.

In April 2022, the Hindu Janajagruti Sena delegation submitted a memorandum to the District Collector of North Goa. On the instruction of the Goa High Court, in response to a petition filed by Varun Pariolker the ADC, passed an order directing the mosques not use loudspeakers without prior permission.

In Maharashtra, where the opposition to azan on the loudspeaker began in the 90s,it has peaked in April 2020. The MNS has upped the ante against the azan on loudspeakers. To diffuse the situation, Muslims have either stopped dawn azan on loudspeakers or have reduced the decibel to the prescribed level. The Muslims are doing this only under political pressure or under court order.

The Muslims of India have described the restrictions as the result of the growing communalism and Islamophobia in India. There is no doubt that communalism and Islamophobia has grown in India but the restrictions on loudspeakers were not a communal issue. The restrictions on loudspeakers have been imposed on all the religious communities. As a result, the Jagran, a religious practice of Hindus was affected. Night long cultural programmes are not held any more. According to a news report, a temple in Mathura has turned off its loudspeakers.

Its not that only Hindus of India are complaining about the overuse of loudspeakers. In Saudi Arabia, a section of Muslims had been complaining against the overuse of loudspeakers in mosques. The complainants included those from parents who said loudspeakers disturbed their children 's sleep. After considering their complaints and discussions on the issue for two years, in 2021, the Ministry of Islamic Affairs directed the mosques not not to use external loudspeakers for relaying sermons or prayers. The loudspeakers will be used only for azan and iqamat and the sound of the loudspeakers will be reduced to one third of the maximum sound. This decision was based on Shariah and a fatwa by two muftis. Earlier, the external loudspeakers were also used for prayers and for relaying sermons. The ministry said that communicating the imam's voice in prayer is limited to only those inside the mosque and that there is no legitimate reason to communicate the same to those at home. In addition to the fact that reading the Quran on external amplifiers was disrespectful to the Quran when it is recited loudly using external loudspeakers while no one is listening to and pondering on verses.

This practice was followed in many places in India too. External loudspeakers were used for prayers, Taraweeh prayer in Ramadan or Friday sermons causing inconvenience to non-Muslims and causing disrespect to the Quran.