First Time In Its Entire History, Darul Uloom Deoband Comes Out Openly Against the Tablighi Jamaat and Its Chief Maulvi Sa'ad Kandhaulvi

Perhaps first time in its age-old history, the largest Islamic seminary in India Darul Uloom Deoband has issued a categorical fatwa against the Tablighi Jama’at.

Accusing Tablighi Jamaat's chief Maulvi Sa'ad Kandhaulvi of perversion, misinterpretation of Islamic texts and desecration of prophethood of the messengers of Allah, , Darul Uloom Deoband has come up with a fatwa declaring him "misguided" and "deviant" (Gumrah). The Deoband seminary also asked the Tablighi Jam’at chief to repent in the court of God.

In a brazen fatwa, the Deoband clerics have accused the Tablighi Jamaat India chief Maulvi Saad Kandhaulvi of aberration, debauchery, misinterpretation of Islamic Shariah, insulting and demeaning prophets and messengers of God. The concluding text in this fatwa issued by the Darul Uloom states:

“It is our religious duty to warn Muslims particularly those with the Tablighi Jam’at that Maulvi Sa'ad Kandhaulvi, the current chief of the Jam’at, is misinterpreting Quran and Hadith. 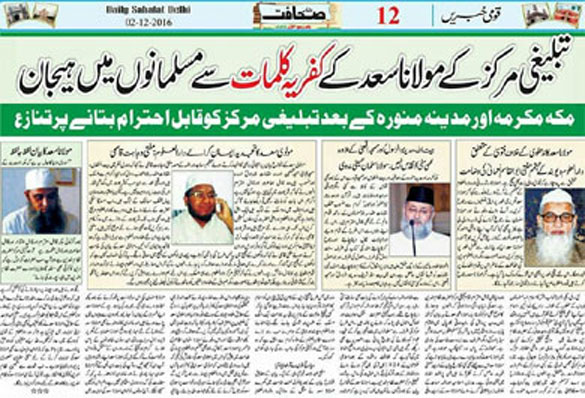 The fatwa, originally drafted for muftis and Islam jurists, was officially made public by the Darul Uloom Deoband and was posted on its website after it was leaked by Roznama Sahafat, an Urdu daily. Afterwards, several messages and comments were circulated in the media.

The Darul Uloom has alleged that Maulvi Sa'ad Kandhaulvi in his speech at recently held Bhopal Ijtema said that "Markaz Nizamuddin is the most sacred place on the earth after Makkah and Madinah – the two holiest sites revered by Muslims across the world.

The Darul Uloom Deoband also cited the statements attributed to Tablighi Jamaat chief charged with hurling insults against Islamic prophets and messengers. The Darul Uloom said the seminary has received complaints regarding the perverted views of Maulvi Saad Kanadhalvi from various sources including those in Bangladesh and Pakistan. 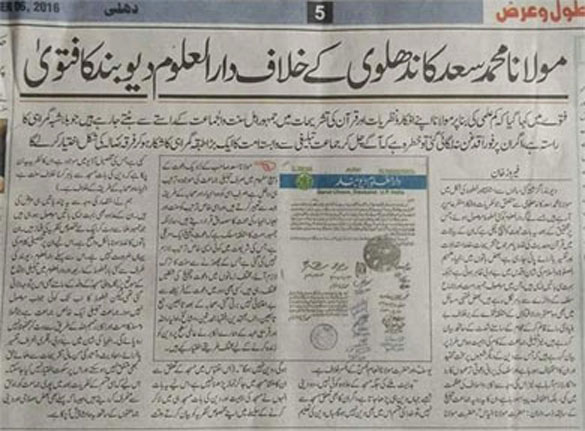 The Darul Uloom has also informed that Islamic clergy across the Indian subcontinent have expressed concerns over the way Maulvi Saad Kandhaulvi is propagating his perverted and distorted views among the Muslims. “We can’t remain silent and a mute spectator when Maulvi Saad Kandhaulvi continues to disseminate his perverted views and wrong interpretations about Islam in large gatherings”, the Darul Uloom said.

“After a close analysis of his speeches we have come to the conclusion that Mualana Saad Kandhaulvi has gone astray and he must repent without any delay”, the fatwa said appealing to the Tablighi Jamaat seniors to take immediate corrective measures to save the group from going astray.

“If corrective measures are not taken immediately, we fear that a large chunk of Muslims associated with Tablighi Jamaat will also go astray and off the track”, the decree said.

Questions and objections over Tablighi Jamaat and its preaching style have been raised in the past as well. It is also alleged that Fazail-e-Amaal - the book Tablighi Jamaat advises its followers to read during gatherings, contains many things which do not have any basis in Quran and Sunnah.

Recently, Maulvi Saad Kandhaulvi has got much notoriety as he made a flimsy and untenable comment in a speech held at Bhopal Ijti’ma (annual congregation), that Markaz Nizamuddin is the most sacred place on earth after Makka and Madina – the two places revered by Muslims across the world.

Going by the news report published in Inquilab, dated December 6, 2016, the Deoband seminary claims to have received complaints regarding the ‘perverted views’ of Maulvi Saad Kanadhalvi from various places including Bangladesh and Pakistan. The Darul Uloom also said that scholars across the Indian subcontinent should express their concerns over the way Maulvi Saad Kandhaulvi is propagating his perverted and distorted views among the Muslim masses.

“After a close analysis of his speeches we have come to the conclusion that Maulana Saad Kandhaulvi has gone astray and he must repent without any delay”, the decree said also appealing to the Tablighi Jamaat seniors to take immediate corrective measures to save the group from going astray.”

It’s perhaps, first time in its entire history that Darul Uloom Deoband has come out openly against the Tablighi Jamaat and its chieftain.

According to Roznama Sahafat, Maulvi Sa'ad is reported to have expressed a vulgar view in an earlier statement leaked by the Urdu daily. He said:

"Using Mobile phones with an Islamic app or Qur'an app is worse than fornication (Zina). Thus, those even the Ulema and Islamic clerics who enter washrooms with such mobile phones in their pockets are worse than the fornicators (Zinaakaar)".