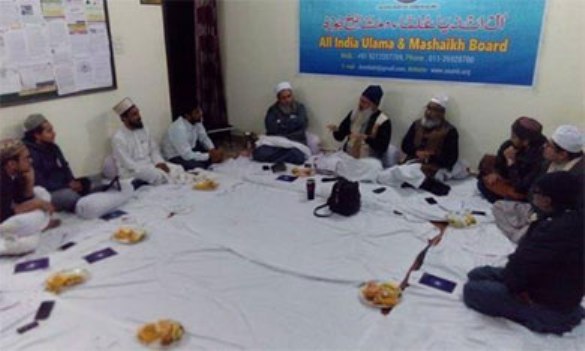 The All India Ulema and Mashaikh Board (AIUMB) held a meet of the executive body with an agenda to ponder over the theological standpoints on the Triple Talaq (Talaq-e-Salasa) on the grounds of the Qur'an and Hadith. The meeting passed a resolution of co-ordination with the leading Islamic seminaries of the country on the Muslim personal law issues. Primarily, this co-ordination is aimed at declaring a consensus (Ijma’a) of the preeminent Sunni Islamic jurists (muftis) and then putting it forward to the country’s government.

The AIUMB’s executive body also decided to reach out to the common Indian Muslim masses in order to promote a matured and cognizant opinion on the Muslim personal law matters, particularly those concerning Nikah and Talaq (marriage and divorce).

Talking to New Age Islam, Hazrat Syed Muhammad Ashraf Kichchawchchwi, the founder and president of the AIUMB, said that a selected group of Islamic experts on the Hanafi jurisprudence (Fiqh) will govern an all-India body of muftis and Ulema and hence the AIUMB will form a complete council of Islamic jurisprudence (Majlis e Shar'ai) to address Muslim personal laws and other related issues with a unanimous opinion (Ijma’a) in order to help reduce the religious controversies in the Muslim community.

A senior member of the executive body of the AIUMB, Hazrat Maulana Syed Tanweer Hashmi (ex-president of the AIUMB Karnataka) recommended choosing a group of well-informed muftis (Ashab-e-Rai) who can succinctly present the conclusions of their in-depth studies on the concerning issues.

Hazrat Shah Ahmad Ahmadi Nayyar Miyan, Sajjada Nasheen of the Sufi shrine at Rudauli Shareef, Faizabad also gave his crucial inputs. He lambasted a section of Muslim leaders and clergy in the country for their accusation against the AIUMB’s ‘purported silence’ on the Triple Talaq issue. He further said that the formation of a council of well-versed muftis is too difficult a task to achieve. However, we have numerous instances of such bodies Islamic jurists like in the case of Moon Sighting (Ruyiat-e-Hilal) at Ajmer Sharif Dargah which helped create a consensus of Muftis on this controversial religious issue.

Syed Haji Salman Chishti, Sajjada Nasheen Ajmer Sharif Dargah, who is also associated with the AIUMB and its global initiative “World Sufi Forum”, stated that a parallel body in the country namely the All India Muslim Personal Laws Board (AIMPLB) loudly claims to honestly raise the Muslim issues and matters of the Islamic Shariah. “But the fact is that it is grossly indulged in the politicisation of the religious issues, which does not augur well for the community”, he averred.

Classical Islamic scholar and writer, Ghulam Rasool Dehlvi who is also a member of the World Sufi Forum, expressed his views on the theological ramifications of the personal laws in the Muslim majority countries. Dehlvi said: “Since the laws of Talaq are of purely jurisprudential (fiqhi) nature in Islam, it is essential to study the causes (Asbaab-Wa-Ilal) for the precedents (Ashbah-Wa-Nazair) of the 9 Muslim countries where Triple Talaq has been outlawed”. “The Indian muftis must accumulate and review the contents of the documents prepared by the religious experts and Islamic jurists in these Muslim countries. Equally important is preparing well-considered and reasoned arguments in response to the questions and objections concerning the Triple Talaq. The Law commission’s questionnaire and recently issued observation of the Allahabad High court cannot be arbitrarily castigated as anti-Islamic interference into the Muslim matters”, he added.

However, Mufti Habib ur Rahm and Alawi Madari, representative of Khanqah-e-Aalia Madaria, Darun Noor, Makan Pur Sharif in Kanpur, put forward a dissenting view. Currently appointed as the chief Mufti at the Darul Ifta Jamia Aziziyah Ahle Sunnat Ziyaul Islam, Siddharth Nagar in UP, Maulana Habib ur Rahman suggested not to cite other Muslim countries which have banned the practice of Triple Talaq, as they might have imposed the state decision on Muslims instead of the authoritative Islamic experts’ consensus. However, he agreed that the AIUMB’s council of the muftis should study the reasons behind the Muslim countries’ decision to outlaw the Triple Talaq in order to provide the common Muslims with an informed opinion and practical solution of the issue.

On this occasion, the AIUMB laid the foundation for its youth wing, namely AIUMB Youth Forum which will be presided by a noted Sufi Islamic scholar in Maharashtra, Maulana Syed Alamgir Ashraf. However, the former office bearer of the AIUMB, Maulana Abdul Moid Azhari has been elected as the general secretary of the newly formed youth wing.

Besides, the AIUMB executive body discussed the formation of an advisory board, renewal of the executive committee, establishment of separate zones form the Board across the country, and the AIUMB’s activism in media, political, religious, social and cultural spheres of life in the country. The General Secretary of the AIUMB, Syed Shah Hasan Jami was also present in this executive body meet.