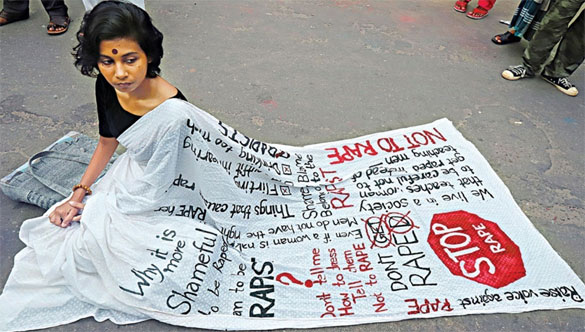 Bangladesh has seen a dramatic rise in the number of rape cases in recent months, say women's rights organizations.

Bangladesh, a self-proclaimed Islamic country where countless Islamic organisations exist which raise a storm on the issue of blasphemy, have been silent when the human rights groups, secular social groups and communists have joined mass protests against the rising cases of rapes and gang rapes in the country. One of the reasons of their silence may be the involvement of an imam of a Jama Masjid and the superintendent of a women's madrasa in Bangladesh.

Large scale mass protests erupted in the country last week after the video of a heinous gang rape of a housewife of Noakhali became viral on social media. The woman from an underprivileged section had been gang raped by the members of a criminal gang patronised by the local Awami League leader for the last one year. She had been terrorised and threatened with death. They extorted money from her and threatened to make the video of the rape viral if she refused to pay them money. When she refused to pay they posted the video on the social media on October 4. The video sparked nationwide condemnation and protests including in Shahbagh in Dhaka.

However, not only the political leaders but also the section that boasts and claims to be the upholders and protectors of Islam are also involved in rapes of minor girls.

The imam of the Manohartuk Jame Masjid, 35 year old Riazuddin was arrested by Sylhet police for sexually assaulting a 12 year old girl student who regularly visited his house for learning Quran recitation.

The superintendent of a woman's madrasa Abdul Qadir,42, was arrested for raping a minor girl twice on Sunday, 4th October. The next day an 85 year old man Harun Rashid raped a physically challenged girl in Rangamati.

A rickshaw puller Sajal Mollah was arrested on October 8 for raping 4 minor gorls aged 6-9 years during the last few days on the pretext of giving them candy.

A police constable allegedly sexually assaulted a girl on October 7.

These are some of the rape and gang rape cases that have come to light during the last few weeks and have stirred the collective conscience of the people of Bangladesh. The UN, the Amnesty International and Human Rights Watch have joined the protests and have demanded speedy trials and harsh punishment to the accused. But the protesters have accused the Hasina government of failure to punish the guilty and stop the rising graph of rapes in the country. To rub salt to the wounds, the Home Minister Asaduzzaman Khan Kamal said that rape was not happening in Bangladesh alone but the world over. This evoked contempt from people and they have demanded his resignation. After the incidents of some high profile rape cases came to light the police arrested some Awami League and Krishak League leaders and cadre but given the low rate of convictions in rape cases in the country, they may come out unscathed.

The criminal justice system in Bangladesh is tilted towards males and so rape victims approaching the judiciary go through humiliating experience during the trial. Moreover the police often refuse to register the cases. The social stigma attached with rape is one of the reasons that most of the rape cases go unreported and are tried in courts. According to an independent survey, 88 per cent rape accused in rural areas and 95 per cent in the urban areas admitted that they did not face any legal consequences. That's why the conviction rate in rape cases in Bangladesh is less than one per cent (0.37%). Only 3.56% of the filed cases ended with conviction.

This is the degree of sensitivity, rather insensitivity of the Bangladesh society and efficacy of the judicial system of a country that claims to be an Islamic country, a country where "Hefazats"and Jama'ats" reign supreme who are always up in arms against atheists and secularists and bring out huge rallies on the issue of blasphemy. But when minor Muslim girls are raped by imams and staff of madrasas, and hapless women are gang raped by criminals and political leaders, they are silent.

According to the statistics compiled by a Human rights organisation in Bangladesh, rape is rampant in Bangladesh because the rapists go scot free in most of the cases. In 2018, the total reported cases were 732. The number rose to 1413 in 2919 and the number of reported rape cases during the first 9 months of 2020 is already 975. But the religious organisations have not demanded death sentence for rapists. Acceding to the demands of the civil society the Hasina government plans to introduce death sentence for sexual crimes.

However, it is regrettable that in an Islamic country, crimes against women and minor girls happen in such a large number and the minister of the country takes solace in the fact that rape happens all over the world. The Muslims are described by the Quran as the best people on earth who struggle to spread good and forbid the evil. It is not befitting for a self-proclaimed Islamic country to compare itself in terms of evil saying that rape happens all over the world.

The religious organisations should work for moral reformation among the Muslims rather than on spreading extremist and exclusivist ideas among the Muslims. Their silence on the heinous cases of rape in Bangladesh smacks of their hypocrisy.