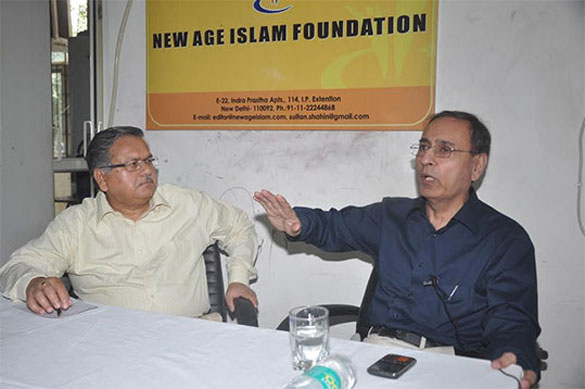 
Initiating the talk, Mr. Sultan Shahin, the chairman of New Age Islam Foundation and Editor-in-chief, New Age Islam, introduced the guest to the mixed gathering of Muslim and Hindu scholars, journalists and writers. He extended deep gratitude to him for accepting his invitation to the event.


Welcoming Dr. Mobarak Haider, Mr. Sultan Shahin told the audience of his great admiration for the bravery of Pakistani Muslim intellectuals who are literally putting their necks on the chopping block in order to speak the truth about Islam and take on the hardliners. "This is all the more praiseworthy, in my view," he said, "as Indian Muslim intellectuals are not in the least visible in this battle, though the Islamist hardliners here in India are not yet in a position to go violent."


Mr. Mobarak Haider expressed his views on vital issues of concern with a special reference to the main theme of the book: “Tehzeebi Nargisiat”, which he himself has rendered into English and named “Cultural Narcissism”. Explaining the basic idea expounded in the book, he said that the book is aimed at pointing out the present pathetic psychological plight of Muslims who are generally plagued with pathological narcissism, a state of deep delusion. We Muslims, he averred, try to justify even vile things if they are presented in the garb of Islam and harbour hate and great disdain against universal values and modern human rights as un-Islamic and, thus, evil. Contrary to the drastically changing and dynamically emerging realities of the modern world, we live in our pride and love of the past and are reluctant to meet the necessities and responsibilities that the modern era places on us, he said in his initial remarks.

Speaking on the relevance of his book “Cultural Narcissism” to the modern times, he said that “cultural and civilisational narcissism is something deeply ingrained in the Muslim psyche. Since we have ruled for more than a thousand years, we feel as if we were still dominating the world.” “We look at the modern and highly advanced civilisation as antithetical to Islamic Shariah; we look at it as the expansion of crusades against the Muslims”. He continued: “Despite the well-known fact that after the industrial revolution, the western civilisation overthrew religion i.e. Christianity, we Muslims are hell-bent on proving that it is an anti-Muslim civilisation.”

Presenting an instance of Muslim cultural narcissism in India, he pointed out that “after the colonial power overthrew the Muslims, the Hindus in India saw in it signs of freedom. But they did not reject the positive and fruitful lessons of advanced civilisation and democratic culture. But the Muslim feudal classes and especially hardcore religious clergy termed all the western sciences and civilisational advancements as un-Islamic and thus kufr (disbelief) shirk (polytheism) and haraam (religious forbidden).

He said that despite the scientific reality that human beings are recognised with intellect and animals with instincts, the present state of Muslims behaving instinctively, and not intellectually, is deplorable. Just as an animal herd does not tolerate other animals in their surrounding, many Muslims do not want to coexist with other religious communities, particularly with non-Muslim religious minorities such as in Pakistan, for instance. As a result of this instinctive behaviour, he pointed out, Christian minority in Pakistan is being treated as impure and third-class citizens being tagged with abusive words. Such an instinctive, injurious and destructive attitude shown by Pakistani Muslims in general is causing havoc in the country and should be brought to an end if we want to improve the deteriorating situation.


Dr. Haider further said that “introspection is regrettably missing from Muslim societies the world over”. He wondered that the Muslims who criticised all the religions and civilisations of the world during their reign that lasted for around 1,000 years, are not ready to tolerate now any internal introspection, let alone criticism coming from other religious communities. “Self-pride, egoism, haughtiness, supremacism, exclusivism and all imprints of paranoia and narcissism are deeply steeped in Muslim minds. As a result, they have turned paranoid imagining that the entire non-Muslim world is after them only because they happen to be Muslims”, said Mr. Mobarak  Haider.

Having ruled for more than a thousand years, a kind of supremacism, a self-centredness, a pathological narcissim  has become ingrained in the Muslim psyche, he said.  Perhaps Muslims even seem to think that they are still dominating. in their long domination over large parts of the world, Muslims did not have to face criticism. So they are not used to the slightest criticism and flare up at the slightest hint of disapproval from anywhere. All other religions have faced criticism and matured in the process. We don't have the stomach for the slightest criticism, he added.

Dr. Haider went on: We look at the modern civilisation as the continuation of crusades against the Muslims and not as secular or non-religious in nature that it is. The west overthrew Christianity but we are insisting that it is an anti-Muslim civilisation. Feudal and tribal classes among Muslims cleverly manipulate the psyche of the Muslims that sees everything in terms of crusades. There are gradual phases of this psyche. Take India, for example. After the British colonial power overthrew the Muslims, the Hindus in India saw in it signs of freedom but were wise enough to adopt the new lessons of civilisation and democracy. They learnt English and joined the modern revolution. The Muslim feudal classes and mullahs termed even English education as evil. They simply could not come out of their grief at the overthrow of the great Muslim empire. They just would not move forward. When the Muslims fought against the British in 1857, this was not for freedom to establish a modern republic but for the restoration of their medieval empire.

Dr. Haider expressed grave concerns over the plight of intellectual decay and educational backwardness inflicting the Muslims at large. He pointed out that they are intellectually in retreat because they have forgotten the Prophetic legacy of knowledge and science. He explained that Prophet Muhammad (peace be upon him) was imbued in the infinite divine inspiration for the acquisition of knowledge and, therefore, he regularly prayed to God: "O Allah! Grant me the knowledge of all things as they are." (Allahumma, Ara`ani kullu shay`in kama hiya). “But Muslims today are not carrying it forward and, instead, we have declared modern sciences Haram (forbidden), Kufr (disbelief) and heresy because they were brought out and revolutionised by the western world, Dr. Haider further said.

In the course of his talk, Dr. Haider also shed light on the hate literature and the religious texts books radicalised by Sayyid Qutub, Maulana Maududi Dr. Israr and their ilk, which are being taught in madrasas in Pakistan”. He explained that elements of religious extremism, supremacism and narcissism have been inserted by hardcore Muslim clerics and the likes of Maulana Maudoodi and Qutub, who encouraged Muslims never to question their ideology and disregard any kind of introspection. “This is the worst kind of narcissism”, said Dr. Haider.

Presenting an instance of narcissism in the Muslim community, he said that the renowned Muslim poet, Dr. Muhammad Iqbal was declared a heretic when he asked Muslim community to introspect and engage in inward critical thinking in the book “Shikwa”, but soon he was praised and made a hero when he wrote “Jawab-e-Shikwa” portraying the strengths of Muslims as those who have spread religion around the globe with a sword of plundering and destroying other nations and their sacred artefacts. However, Mr. Mobarak  Haider made it clear that all this goes completely against the right version of Islam, presented and exemplified by the Prophet Muhammad (peace be upon him).

Dr. Mobarak Haider said that the heinous atrocities against the religious minorities and weaker sections of society in Pakistan are supported and justified by the government officials. He boldly averred that the terror outfits like Tahreek-e-Taliban Pakistan are motivated by the government and are active in large part of the country, having no consideration for the law and order at all. “Receiving huge financial funds from the global Saudi Wahhabi movement, what is being taught to the young children in Pakistani schools and Madrasas on different levels of education is not only academically incorrect but is ideologically suicidal. They teach hate against the world and against our own minorities and smaller Muslim groups”, said Mr. Haider. “Islamic principles are brazenly infringed and basic human rights are clearly violated in the country founded in the name of God, Pakistan, because the government is playing into the hands of religious extremists who believe fomenting terrorism and violence is the real preaching of Islam”, he further said.

In his concluding remarks, Dr. Mobarak  Hiader repeatedly elaborated the theme of the book “Cultural Narcissim” saying that the supremacist, exclusivist and totalitarian ideology being fed to Muslims, about being the best, purest, most pious and the worthiest of being the rulers in the world and preaching their faith under the sword has turned Muslims into a Narcissist community full of paranoia, extremism and an inclination for violence.

Soon after the talk delivered by Dr. Mobarak Haider, an interesting and lively question and answer session was opened by the journalists and correspondents of various Urdu, Hindi and English media outlets. Mr. Mobarak Haider patiently offered intellectual and credible answers to all the questions and queries posed to him. At the end of the program, Mr. Sultan Shahin, Editor, New Age Islam extended special vote of thanks to the guest as well as media persons who participated in the brainstorming event.