1. Mosques have been asked to use loudspeakers only for Azan and Iqamat

2. Mosques have been directed to forego use of external amplifiers

3. The volume of loudspeakers will be lowered to one third 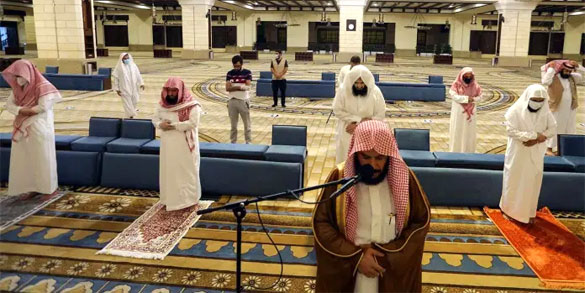 The use of loudspeakers in mosques has remained an issue of debate and sometimes creates controversy in India. Non-Muslims often complain that the high volume of azan disturbs their sleep and peace of mind while Muslims consider the use of loudspeakers their religious right. Azan is called with the help of external amplifiers so that the sound of azan reaches every household in the area. In some cities, the prayer of Taraweeh or Friday prayers are also conducted with the help of external loudspeakers. This sometimes becomes a cause of communal confrontation.

On the other hand, the liberal section of Muslims advocate limited use of loudspeakers in mosques especially during Ramadan. But the mainstream Muslims and the section of religious scholars denounce such liberal views.

The Ministry of Islamic Affairs of Saudi Arabia has issued new directives on the use of loudspeakers and external amplifiers in all the mosques of the kingdom.

According to the notification issued by the ministry, now the loudspeakers in the mosques will only be used for two purposes: one for calling the Azan and, two, calling the Iqamat ( second call for prayer indicating that the imam is ready to lead the prayer). The loudspeaker of the mosque cannot be used for any purpose other than this.

Another directive issued by the ministry says that the prayers conducted by the imam should be specific to the devotees within the mosque with no legitimate need to convey it to those at home.

The notification also ruled that external amplifiers will not be used to recite the Quran because it is disrespectful to Quran as no one is listening and pondering over the verses.

The circular has been issued by the Minister of Islamic Affairs Abdul Latif al Sheikh. The circular is based on the hadith which says, "One should not trouble the others and one should not raise the voice in recitation or in prayer over the voice of the other."

The circular is based on the fatwas issued by senior Islamic scholars Sheikh Mohammad bin Saleh al Uthaimin and Sheikh Saleh al Fawzan.

The ministry acted on a report which said that external amplifiers and loudspeakers used for any purpose other than azan harm patients, old people and children in the houses in the vicinity of mosques.

Moreover, the ministry had also asked the mosques to lower the volume of loudspeakers for azan and Iqamat to a third. The ministry has warned that any violation of the rules will invite heavy penalty.

This directive of the Saudi Arabia which is a role model for Muslim community of the world including Indian Muslims should bring about a change in the religious behaviour of the Indian Muslims where loudspeakers are used not only for calling Azan and Iqamat but also external loudspeakers are used for conducting Friday prayers and the prayers of Taraweeh in some towns and cities causing inconvenience not only to non-Muslims but also to Muslims who are sick or children or elderly persons.

The loudspeakers are played at a high volume which also causes violent reaction from non-Muslims as happened in some places in India during the month of Ramadan last year.

In some towns of India, loudspeakers of the mosques are also used to recite Salat-o-Salam after the morning prayers and Friday prayers. External amplifiers are used for it causing inconvenience to the people in the vicinity.

Since India is a Hindu majority country and Hindus also reside in the vicinity of mosques, the directives issued by the Saudi government is relevant to India as well and Indian Muslims should adopt the Saudi policy on the use of loudspeakers to ensure peaceful and harmonious co-existence of different religious communities in India.