The roots of the concept of the state lie in the political ideas formulated in Ancient Greece and the Roman Republic. Greek philosophers Plato (d. 347 BCE) and Aristotle (d. 322 BCE) write of the ‘polis’ (the city state) as an ideal form of association, in which the religious, cultural, political and economic needs of the citizens can be satisfied. The ancient Roman idea of ‘res publica’ is more similar to the modern concept of the state. According to Encyclopaedia Britannica, the res publica was a legal system, the jurisdiction of which extended to all Roman citizens, securing their rights and determining their responsibilities. 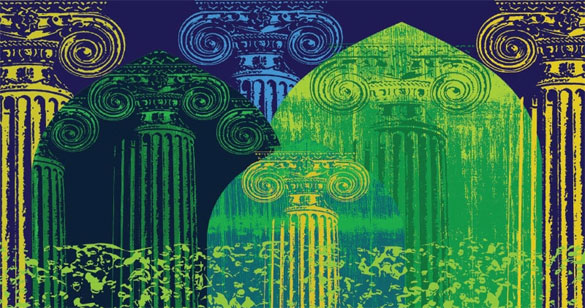 However, it wasn’t until the 16th century that the modern concept of the state fully emerged in Europe. Between the 17th and 19th centuries, the idea was rapidly expanded and developed in the works of philosophers such as John Locke, Thomas Hobbes, Jean-Jacques Rousseau, Jeremy Bentham, Karl Marx, etc. By the 19th century, the concept of the state as we know it today, had been practically established in various regions of Europe.

According to the noted political anthropologist Professor Irfan Ahmad (in ISIM Review, Autumn 2006), till the 17th century, “the state governed by not governing.” Seldom did it interfere in most affairs of its subjects. Its main interest was to extract levies and taxes. Its administrative scope was limited. The French philosopher Michel Foucault claimed that the scope of the state began to expand from the 16th century. The idea of the state in non-western regions was no different. According to Irfan Ahmad, the nature of the state in Muslim-majority regions and in regions being ruled by Muslims was also static and limited. It was only interested in gathering taxes and aiding the monarch and his vassals to retain their wealth and power. Otherwise, it hardly ever interfered in or actively regulated the lives of the citizens.

The state as we know it today is thus a comparatively recent construct and a product of political and economic modernity. So what do concepts such as ‘Islamic State’ or ‘Riyasat-i-Madina’ (State of Madina) really mean? Such terms are often used by ideologues and politicians in Muslim-majority regions. The thinking behind them is that Islam is inherently political and its sacred texts lay out a blueprint for a state run by laws prescribed by God. Furthermore, those who hold this view insist that such a state came into being with the arrival of Islam that actively regulated every political, economic and social aspect of the community.

In his essay for the anthology Islam, Politics and Anthropology, Irfan Ahmad writes that till the 16th/17th century, the working of the state, even in powerful Muslim empires, was as limited as it was in non-Muslim realms. He adds that the idea of an Islamic State is actually not more than a hundred years old. According to the works of Egyptian scholars Ali Abdel Raziq (d.1966) and Sa’id al-Ashmawi (d.2013), theologically, Islam treats faith and the concept of state separately and, in fact, puts more emphasis on faith and how it can operate as a moral guide.

Ahmad writes, “to impose the modern concept of the state on 7th century Arab society is misleading.” Because of infrastructural weaknesses, the state could not have expanded its scope beyond a handful of duties, even if it wanted to. The Syrian academic and historian Aziz Al-Azmeh, in a widely debated 1990 essay Utopia and Islamic Political Thought, demonstrates that there is no political theory (about a state) in classical Islamic political thought. Fact is, those who insist that there is, are simply projecting the modern concept of the state on ancient and medieval Islamic polities, reimagining these polities as Islamic states which influenced almost every aspect of the lives of their citizens.

According to Ahmad, such projections are the result of ideas that first emerged in the early 20th century. One of the pioneers in this respect was the prolific South Asian ideologue and Islamic scholar Abul Ala Maududi. Ahmad writes that, as a young man, Maududi was associated with The Muslim, a daily that took an anti-British, pro-Congress-Party position and promoted Muslim-Hindu unity and a secular set-up in India. However, after 1937, Maududi changed his stance, especially when Jinnah’s Muslim League began to press for a separate Muslim-majority state.

Ahmad writes that all major political players in British India had become smitten by the concepts of the state and nationalism introduced in the region by the British colonialists. The Muslim League began to speak about a Muslim state, the Congress about a post-colonial secular Indian state, and the leftists about a socialist state.

Rejecting all these concepts as ungodly, Maududi came up with the idea/theory of hukumat-i-Ilahiya (Government of Allah or Islamic state). He then set out to formulate a new political theology, by interpreting Islamic scriptures in the context of the state. In a 1941 essay he writes, “In reality, the classical Arabic word deen approximately has the same meaning which the word state has in the contemporary age.” Noting that the modern state regulates almost every facet of people’s lives, he contemplated the creation of an ‘Islamic state’ that would regulate every aspect of its citizens’ lives according to laws laid down by the Islamic scriptures.

In other words, whereas the Islamic scriptures were often understood as moral guides, Maududi emphasises the need to understand them as political signposts to enact a pious state. His ideas were soon adopted by the ideologues of the Egyptian Muslim Brotherhood and other pan-Islamist movements.

Maududi understood the Muslim League as a secular Muslim nationalist organisation. So, to neutralise Maududi’s criticism, the state of Pakistan, very slowly but surely, began to borrow his ideas. Yet, Maududi’s own party could not gain much traction among voters. This was probably due to the aforementioned ploy by the state and, more so, because from the mid-1970s, even non-religious parties began to adopt ideas from Maududi and fused them with their secular outlook.

His ideas in this context reached completion as an elaborate theory in his 1979 magnum opus, Four Fundamental Concepts of the Quran. The theory suggested that an Islamic state existed during the early days of the faith because the sacred scriptures were treated as an all-encompassing political constitution, and that such a state fell away because of corruption, and, therefore, needs to be re-enacted.

Interestingly, this is the narrative popularised by the current government in Pakistan headed by Imran Khan. Even though Maududi’s thesis was inspired by the modern and largely European ideas of the state, this does not seem to bother those who take the revisionist historical claims of his theories as fact.

Ever since the 1980s, whenever there are claims and promises made by a variety of ideologues and leaders in the Muslim world, about working towards an Islamic state or Riyasat-i-Madina, it is assumed that such a state is rooted in the workings of a 7th century Islamic realm. According to Ahmad, objective history does not support this. As Egyptian scholar Nasr Abu Zayd once observed, “Religious scriptures are at the mercy of the ideology of its interpreter. For a communist, they would thus reveal communism, for a fundamentalist they would be a highly fundamentalist text, for a feminist it would be a feminist text, and so on ...”

Original Headline: DID THE ’ISLAMIC STATE’ EVER EXIST?