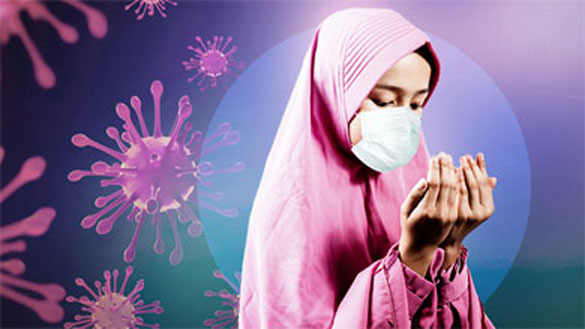 Islamic rules over epidemics to protect people from death and sickness go back to the very early stages of the emergence of the monotheistic religion.

On many occasions, the Prophet Muhammed advised his companions to value their lives as the utmost importance over death in his numerous sayings (hadiths), urging people to stay away from places where there were epidemics.

“Our Prophet speaks about the concept of quarantine fourteen hundred years ago,” says CaferKaradas, professor of divinity at Uludag University, referring to one of the widely known hadiths.

“When you hear that [a plague] is in a land, do not go to it and if it occurs in a land that you are already in, then do not leave it, fleeing from it,” the Prophet famously said.

“This saying exactly refers to the principle of modern quarantine. What it has been currently practiced [concerning the coronavirus outbreak] is the same principle as the advice of the Prophet,” Karadas told TRT World.

As the Covid-19 outbreak continues to kill tens of thousands of people across the world, the Prophet Muhammed’s advice on how to respond to a pandemic offers a motivation to people to stay put in their homes and protect themselves from the deadly virus.

Karadas says that the most important aspect of the pandemic is the element of human contact, which should be decreased to the lowest possible level to minimise the virus’s deadly effect.

“The Prophet gives utmost importance to his own health and public health. When he was in Medina and was about to make an agreement with one of the delegations, he refused to shake hands with one of the people [from the delegation], who had a contagious disease, sending him back [to where he came from],” said Huseyin Ari, an expert in the High Council of Turkey’s Directorate of Religious Affairs.

During the rule of Caliph Umar, who was one of the four righteous caliphs after the Prophet according to Sunni Islam teachings, Muslims also tried to practice what the Prophet urged them to do in the time of an epidemic.

When one of the Muslim armies approached a location in current Syria or in the old Levant, where there was a plague, back in the mid 7th Century, the commanders fell into confusion over what to do.

Then, he personally moved to a location to meet with commanders to discuss the situation. When the disagreement continued, he consulted with a diverse range of advisers to reach an ultimate decision.

Abu Ubaydah ibn Jarrah, the commander of the army and one of Umar’s best friends, who passed away later from the plague, expressed his dislike of Umar’s decision, asking: “Are you fleeing from the decree of Allah?”

“None of you should wish for death due to a calamity that has afflicted him,” Prophet Muhammed said in one of his famous hadiths, urging Muslims to find legitimate and protective ways to survive.

“Yet if he must do something, let him say: O Allah, keep me alive so long as life is good for me, and cause me to die if death is better for me,” the Prophet said in the continuation of the same hadith.

Muslim worshippers visit "Al-Baqi" cemetery, where the Prophet Mohammad's family, relatives and companions are buried, with Al-Masjid al-Nabawi, (the Mosque of the Prophet) seen in the background, after the early morning prayer of Al-Fajr in the holy city of Medina, Saudi Arabia January 20, 2016. (Amr Abdallah Dalsh / Reuters Archive)

“An epidemic obviously threatens both personal and public health. As a result, a Muslim should strictly follow instructions of pandemic experts to protect his/her personal life as well as public health,” Karadas said.

Muslims need to abide by social distancing rules in the wake of the coronavirus pandemic in accordance with the advice of the Prophet, Ari says.

“If we damage someone else’s health or financial belongings directly or indirectly, we violate their rightful due,” Ari said.

“If someone infects the virus to someone else as a result of our ignorance or deliberate action, he/she violates the infected person’s rightful due,” Ari viewed.

“If the infected person dies because of the virus-related disease, ? May Allah protect ? , it means the person, who infected the other person, also led his/her death in a sense, [becoming responsible for the death].”

Original Headline: What Islam Tells Us About Responding To Deadly Pandemics