Afghanistan Should Establish Enlightened Religious Schools to Ward Off the Distortion of Islamic Faith, Unleashed by MadrasasOperating in Pakistan 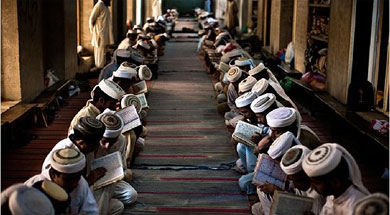 History is filled with cases of use and abuse of faith and religious related sentiments of people by Governments. Afghanistan is the most prominent case in point in modern history where faith and religion is abused by invading forces – most lately since 1980s when ex-USSR invaded the country out of cold war calculus.

The opposite block led by the United States of America which included European and some Middle Eastern countries, Pakistan resorted to the use of faith and religion to rally people around military organizations formed to put up resistance against the Soviets invasion of Afghanistan.

The process of recruiting religious fanatics was expanded to affluent Middle Eastern countries where Jihadi organizations started to raise fund and take active role in the guerrilla type war unleashed against the Government in Afghanistan – of course with unlimited blessings from CIA and ISI.

The Soviets were forced to leave Afghanistan after a decade of bloody war, and Western powers declared ‘mission accomplished’ and left the country without a plan to re-stabilize Afghanistan, leaving a vacuum of power in the country. The US left all Jihadi organization networks intact, with their full military and financial strength in swing in the region – without bothering to winding them up after declaring ‘mission accomplished’ – which led to the fateful attack on World Trade Centre on 9/11/2001that killed thousands of people. As a result, the US had to come back to Afghanistan to find and punish an enemy that was once friend, teamed up with the US during the campaign against the ex-USSR in the decade of 1980s.

On the other hand Pakistan, which had historic grudges against the State of Afghanistan and tempted by its vested interest to bring Afghanistan under its sphere of influence – continued to use the cold war era tactics by recruiting people around religious causes and ushered them to continue fighting in Afghanistan during the decade of 1990s. Oblivious to the undercurrent that Pakistani military and civilian leadership were pursuing in Afghanistan, the Western block now started to turn their guns to exactly the same religious, militaristic groups – including Taliban and others – whom they once created and supported.

Pakistan extended support to these groups through religious Seminaries (Madrasas) with a hope to establish a puppet Government in Afghanistan, run by one or more Jihadi groups it created during the decades of 1980s (Mujahideen) and 1990s (Taliban).  In an article published in the Express Tribune on April 6, 2017 in Pakistan, EthesamWaheed wrote: “There is something amiss about (the way) our great faith is being taught mainly in the religious seminaries of the rural areas, which enables terrorist outfits to recruit youth conveniently and transform them into minions” He wrote that “the intelligence agencies have deliberately handed over the responsibility of the ‘Deen’ (Faith) as a code of life to religious Seminaries or Madrasas.” He further detailed that “the Seminaries teach Islamic subjects such as Tafseer (interpretation of the holy Quran) without putting in place a mechanism of scholarly monitoring”.

Finding Madrasas viable platform to recruit zealous fighters, the Pakistan spy agency – ISI – funnelled fund and resources to increase number of Madrasas in the rural areas of Pakistan and recruit students. Teaching syllabus of these religious Seminaries are strictly confined to the doctrine dictated by ISI and aligned with long-term goals and objectives of the agency – i.e. to create a cult of fighters to destabilize Governments in Afghanistan and India. At the time of independence in 1947, Pakistan had only 300 Madrasas, and official statistics as of 2017 show that the number of Madrasas stands at 3500 across the country – mostly in the rural areas of the country (EthesamWaheed, the Express Tribune, April 2017).

One such Madrassa is called DarulUloomHaqqania, located in AkoraKhattack, Khyber Pakhtunkhwa province, Pakistan. This Seminary propagates the Deobandi trend of Sunni Islam and was founded along the line of DarulUloom Deobandi on 23 September 1947 by Maulana Abdul Haq, father of Maulana Sami ul Haq (who is considered as the father of Afghan Taliban). Owing to its teaching method, this Seminary is dubbed as the ‘University of Jihad’, and its alumni include many senior officials of the Mujahideen resistance force who fought the then USSR, and the current Afghan Taliban, whose leader Molla Umar is one of the graduates.

The Haqqani Madrassa was one of the many Madrasas in Pakistan where Pakistani and the US intelligence agencies used to recruit fighters for the campaign (Jihad) against the then USSR occupation of Afghanistan in 1980s (Ayaz Gul, 4 June 2016, East Asia Pacific). “A large number of graduates from DarulUloom Haqqani continues to join Afghan Taliban ranks fighting the US-led international forces and their local allies in Afghanistan”.

In the backdrop of historic events explained above, it is obvious that religions and religious schools are used by the invading enemies to advance their causes in Afghanistan. As mentioned before, history has many cases in points where kings and leaders of the Governments have taken steps to counter-respond to enemy tactics to use people’s religious and faith related sentiments to form uprising or insurgency.

One such case in point is King Henry VIII. Though the Church of England was founded by Gregorian Mission to England, Augustine of Canterbury in AD597, the term Church of England refers to its status after 1534 when it was separated from the Catholic Church and became one of the many Churches embracing Protestant reformation. King Henry VIII decided to break with Catherine of Aragon. He had himself as opposed to the Popes, and declared himself as the supreme leader of the Church of England. The reason to take this big step was to put an end to the interference of the Catholic Church in the politics of England and to maintain freedom of political, social and economic decision to himself.

It is, therefore, incumbent on the Government of Afghanistan to establish enlightened, scholarly religious educational institutions to purge the faith from politically motivated additions and educate the public about the real value of religion in Afghan society.

The problem for the State of Afghanistan and Government of Afghanistan since last forty years is persistently emanated from groups educated in so called religious schools in neighbouring Pakistan where distorted version of the faith is thought and streamlined among their minions.

This should be and can be warded off by funnelling resources and budgets in the annual budget allocation by Afghan Government, and to bring qualified faith and religion-based knowledge from established Islamic schools of religion and faith from around the world. It is pertinent to say that the level of education of the people of Afghanistan as low as 30%, which makes the whole population of the country vulnerable to fall for recruitment tactics pursued by Madrasas in Pakistan since last four decades. Government of Afghanistan should take heed of this problem and start devising ways and methods to establishing a strong network of enlightened, scholarly religious schools to ward off the ongoing, persistent distortion of Islamic faith, religion and people’s belief unleashed by these Madrasas operating in Pakistan.