The effort to prevent youth self-radicalisation must not miss “the elephant in the room”. The “elephant” is ISIS’ ideology that centres on the establishment of God’s kingdom on earth through Daulath Islamiah (Islamic State) ruled by the Khalifah (Caliph) and its call for global Muslims to perform hijrah (emigration) to this newly formed state. 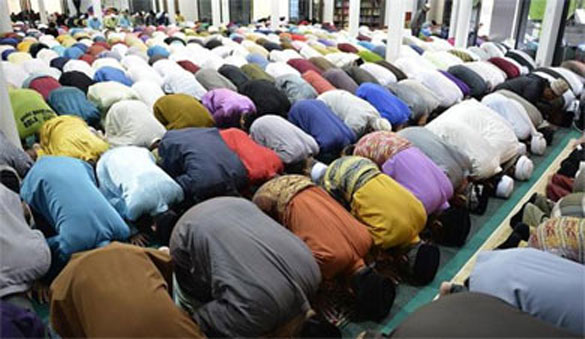 Muslims in prayer at the Darul Makmur Mosque in Yishun. The Singapore Muslim community’s response to the recent detention of two self-radicalised youths has been encouraging. -- PHOTO: ST FILE

The cunning use of these sacred terms by the Islamic State in Iraq and Syria (ISIS) has enabled the militants to win the support of many Muslims across the world who idealise and romanticise the belief that God’s laws must rule the earth and His authority resides within the supreme leadership of the Caliphate.

According to them, Muslims are then obliged to emigrate to this newly established abode of divine blessings to achieve salvation. This powerful ideology and its narrative must be defeated.

The Singapore Muslim community’s response to the recent detention of two self-radicalised youths has been encouraging.

They took ownership of the problem and resolved to guide youth to the correct teachings of Islam. However, the question is whether the community through its religious scholars and teachers is armed with a stronger counter- narrative to defeat ISIS’ ideology centred on the Islamic State, Caliphate and emigration.

CAN the counter narrative state that the idea of setting up the Islamic State, as a religious obligation, is a fallacy?

Can they take the position that the Caliphate system is not valid any more in the world today? Can they say that emigration is no longer an obligation?

The community must have clear answers so that its religious teachers can use them to guide its youth and protect them from falling for ISIS’ ideology.

Unclear or qualified answers may subject impressionable youth – prey to slick propaganda – that ISIS is the saviour of today’s spiritually dispossessed Muslims who come from non-Muslim lands, live under non-Islamic laws and are ruled by non-believers.

Is living in a secular, Muslim- minority state like Singapore a darurah (a temporary sinful situation that has to be tolerated until a permanent abode, blessed by God, exists)?

Once it is deemed to exist, is it an obligation for Singaporean Muslims to hijrah to the Islamic State (that is, the permanent abode) so that they can overcome the sin of living in a non-Islamic state?

These questions are not new, though. Singapore’s highest Islamic authority, the Islamic Religious Council (Muis), wrestled with them more than 10 years ago, in the aftermath of 9/11 and the shocking exposure of the homegrown Jemaah Islamiah network in 2002.

The council developed a narrative, built consensus around it with Islamic teachers, and popularised it with the Muslim public. The concept of the Singapore Muslim Identity is a religious narrative embedded in Singapore’s social reality. It categorically states that it is religiously permissible for Muslims to live in a majority non-Muslim, secular state as loyal citizens.

There is no need for Muslims in Singapore to feel spiritually dispossessed and constantly guilty of sin living in a non-Islamic state without the imposition of syariah laws (Islamic laws).

The Office of Mufti of Muis published this religious narrative as a guiding document called the Risalah. It stated that it is not a hindrance for the community to lead life as Muslims faithful to their religion, as their fundamental rights to practise Islam within the context of the secular state are safeguarded by the Constitution.

The Risalah too made it clear that there is no contradiction between being a good Muslim and being a good citizen.

It argued that the emotional attachment of a Muslim to his country of abode is a natural instinct and acceptable, as long as this love for the country is based on his religious faith and a deep sense of responsibility to contribute to the well-being of the state based on universal values.

Islam encourages Muslims to work and collaborate with anyone in the pursuit of goodness as it is within the Islamic creed to be inclusive and pluralistic as long as the actions are not immoral.

Like their other co-religionists, Muslims enjoy a number of privileges within the ambit of the secular state.

On the whole, the Muslim community, like other religious communities, sees that Singapore is a “secular state with a soul”.

In a study conducted by Scheherazade S. Rehman and Hoessin Askari from George Washington University using 67 proxy indicators to measure how Islamic a country is in terms of non-spiritual dimensions such as economy, social life, legal and political systems, it was found that out of 208 countries, Singapore came in 37th. The interesting finding was that no Muslim-majority country was ahead of Singapore. Singapore was ranked as “more Islamic” than all Muslim-majority countries studied. The report was published in the Journal Of Global Economics (Vol 10, Issue 2, Item 2).

This study affirms the point that it makes a lot of sense for Singaporean Muslims to defend Islamic life in this country which offers more “Islamicity” than Muslimmajority countries and provides conditions for them to freely perform religious practices without causing disharmony or encroaching on common space.

NEVERTHELESS, the counter narrative developed more than 10 years ago needs to be updated and beefed up to neutralise the more complex current issues of Islamic State, Caliphate and emigration.

From a religious perspective, arguments need to be developed that it is not a religious obligation to set up the Islamic State and that the Caliphate is not relevant in today’s world.

Muslims need to be reminded that their Prophet and the successive early generations did not establish a state.

Their focus was on organising the life of the ummah (community of believers) to be a moral community with its pecking order, social arrangement, economic system and defence capabilities.

Appointed as a prophet-philosopher rather than a prophet-king, the Prophet never thought in terms of power structure of the state.

Moreover, the idea of state is an invention of the modern era. It is therefore a fallacy to believe that setting up the Islamic State is a religious obligation.

The idea of the Caliphate is even more contentious.

There is a religious view that the Caliphate no longer existed after the Prophet and his four companions who succeeded him but the consensus among Islamic scholars is that Muslims no longer have a Caliphate after 1924 CE when the Ottoman Empire disintegrated.

Today, global scholars on Islam adopt the position that the Caliphate is no longer valid in view of the changed nature of Muslim existence.

There are 1.5 billion global Muslims today but they are deeply divided politically in numerous Muslim countries and represented by highly divisive organisations of Islamic scholars.

Finally, the idea of emigration has been invalidated by the Prophet himself who categorically stated that there would not be any more emigration after the conquest of Mecca in 629 CE.

It is not the intent of this article to discuss the above ideas in detail. Islamic scholars and teachers, led by the Office of Mufti, need to thoroughly discuss and develop positions to counter ISIS’ propaganda that setting up the Islamic State, reinstatement of the Caliphate and emigration are religious obligations.

The community cannot afford to lose in this ideological battle to prevent its youth from becoming self-radicalised.