Phony Muslimness among Muslim Boys in Schools and Colleges in UK

I am concerned about the segregated seating arrangements in colleges and Universities for seminars and other educational activities organized by Muslim Students Associations in the United Kingdom. 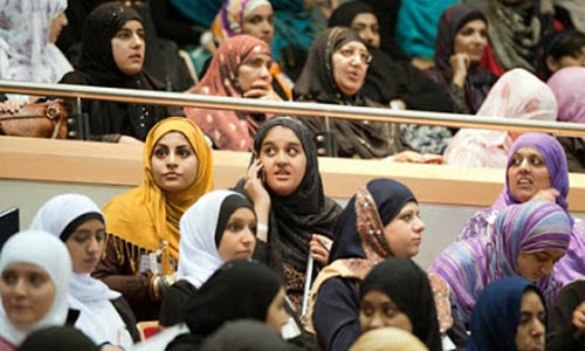 Unlike the Students Association in the United States, where both men and women manage and participate, the MSA's in UK seem to be run over by the boys. These boys become instantaneously Sanctimonious Muslims when they have a responsibility to manage a Muslim loaded event. The more they "control" women to go sit elsewhere, the greater the Muslim they become! What a phony Muslimness!

It's not only the boys, some of the Imams who come around to give Sermons at special events, invariably make a comment to women sitting somewhere in the darkness in the back to quit gossiping! Darn it, when your lecture is so idiotic, men do the same, either gossip or go to their ‘i-phones’ and Samsungs.  I am glad I don't go to these events, but when I do, I will tear them apart for such an abusive and disrespectful comment towards women. Remember, our silence gives them permission to continue doing the wrong. Speak up; the other goats will jump in later.

Steering women and men to different sitting areas in the name of Islam needs to go. A man or a woman should have the freedom to choose, where he or she is comfortable to sit, nothing should be forced on. There should be no compulsion.

Do they teach that Islam is about regulating your own behaviour to be a kind, gentle, truthful, trustworthy and caring and just individual,  the Amin, as the Prophet was called. Indeed, that should be the first foundational Sunnah for Muslims to follow. Islam is not about controlling others personal behaviour.  Islam is about freedom - you are individually rewarded or deprived with the grace of God for your acts, neither the Muslim Students Association nor the Mufti of your town is even remotely accountable for your acts.  Even Prophet Muhammad, let alone your parents, spouse, siblings, or your Imam will not come to your rescue in your reflective solitude or the Day of Judgment. Prophet Muhammad did not assign the responsibility to teach Quran to anyone either.

The Hijab or segregation is a cultural product of predominantly Muslim nations, there is no sanction for it in Islam. The very first and foremost place of worship does not have segregation, even to this day.  Men and women perform Hajj together, God wants all of us together without distinction.

Muslims living in UK, US, France, Canada or elsewhere have their own culture, or modified culture without any reluctance. Unlike Saudi Arabia, where women are taken care of, the women living in other nations have to learn to live on their own, earn their own and support their kids if they have to, and their culture should be based on their needs and not the needs of Saudi Arabia.

Shame on those parents who make their daughters dependent on men, and when that man dies, or runs off - it puts the woman in a difficult situation. Is that how the parents care for their daughters?  She should be free and able to handle her own affairs. The prophet had said to Fatima, you will not get a free ticket to paradise just because you are my daughter; you have to earn it like everyone else.

If a woman is trained to live in segregation how would she handle in situations when her father, brother, husband or son is not around. Love is not making a dependent out of the loved ones. If we love, yes, if we love our loved ones, we make them independent, free and able to stand on their own in contingencies with the least suffering.

By the way the stories are similar with Sikhs, Hindus, Jains,  Christians and others from Asia.

Mike Ghouse is a speaker, thinker and a writer on pluralism, politics, peace, Islam, Israel, India, interfaith, and cohesion at work place. He is committed to building a Cohesive America and offers pluralistic solutions on issues of the day at www.TheGhousediary.com. He believes in Standing up for others and has done that throughout his life as an activist. Mike has a presence on national and local TV, Radio and Print Media. He is a frequent guest on Sean Hannity show on Fox TV, and a commentator on national radio networks, he contributes weekly to the Texas Faith Column at Dallas Morning News; fortnightly at Huffington post; and several other periodicals across the world. His personal site www.MikeGhouse.net indexes all his work through many links.