1.    The Last Sermon is a treasure of the ethics of Islam, a religion of peace and pluralism.

3.    The Last Sermon is a guiding light for a just and upright world society.

4.    Following the Last Sermon to bring back serenity and tranquillity in the world society is a must. 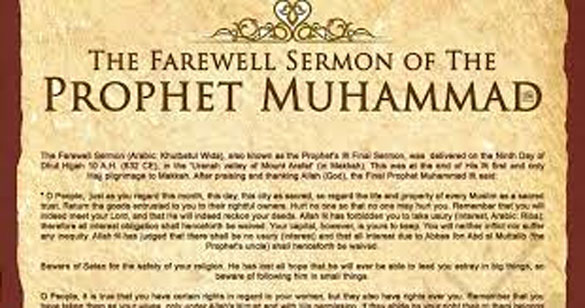 Prophet Muhammad Pbuh's farewell pilgrimage to Mecca for Haj was destined to be a momentous historical event. On the 9th of Zil-Hijjah, 10 AH (6 March 632), Prophet Muhammad Pbuh delivered a sermon that exhibited the ethics of Islam, a religion of peace and pluralism teaching the positive characteristics of human life here and heavenly life hereafter.

The messages delivered to the world by Prophet Muhammad Pbuh during his farewell pilgrimage of 632 AD are a guiding light for a just and upright world society. The commands and the advice are not meant for any particular community (Muslims) but it is addressed to the humanity (followers of all the religions and religious faiths) at large. The last sermon carries a cure to all the social ills that are diminishing the divine essence of life. Following are the messages from the Last Sermon that need our utmost attention being serenity to the world order:

Human Dignity; a Foremost Requirement for a Humane Society

The war being fought in various quarters of the world on lame excuses created by us have harmed the basic of humanity. These wars have lowered human dignity to the lowest ebb. People are dying of hunger, living in the most unhygienic conditions, children are being used as shields during the fights, women have lost their womanhood in the eyes of their abusers and no one seems to be aware of the situation as no one is even talking of these inhuman acts of the humanity.

The last sermon of the Prophet of Islam impressed upon its listeners to uphold human dignity as serving humanity is a charity that has to be rewarded at the Day of the Judgment with a heavenly abode in the hereafter life. Prophet Muhammad Pbuh said in his last sermon:

"Hurt no one, so that no one may hurt you"

If the world follows the golden words mentioned above the dying human dignity will find a breathing space that will create a world where people will live with the assurance of no hurt to their social feelings. Bringing the eroded human dignity back to life should be the world’s first concern.

The Rights of the Women

The world has various organisations that are fighting for the rights of women but to no avail. The rights of women are being abused in every stratum of society irrespective of the social norms they are living in. Prophet Muhammad Pbuh said:

“O People, it is true that you have certain rights concerning your women, but they also have rights over you. Remember that you have taken them as your wives, only under Allah's trust and with his permission."

The above-mentioned part of the last sermon is a reminder to the human being that women as wives have been taken by us with the permission of Allah, the Most Gracious, hence we must respect them. The Prophet of Islam further said, “I enjoin you to treat women well and be kind to them”

Economic inequality is a bane of society. The divide between the rich and the poor is growing at a speed that seems to be difficult to bridge. Islam has shown the path of economic equality by commanding charity, Zakat and Fitrah in favour of the poor of the society. The Holy Quran says:

“Establish prayer, pay alms-tax (Zakat), and bow down with those who bow down.” (Surah Al-Baqarah: 43)

“Take (O Muhammad s.a.w.), from their wealth a charity by which you purify them and cause them to increase.” (Surah At-Taubah: 103)

The Holy Prophet of Islam in his last sermon commanded his follower in the following words:

“And give your wealth in Zakat”

The Curse of Discrimination

The curse of discrimination has epidemically spread all over the world society, irrespective of the educated, uneducated, rich or poor. Allah the Most Gracious says in the Holy Quran:

“O humankind, indeed We have created you from male and female and made you peoples and tribes that you may know one another. Indeed, the noblest of you in the sight of Allah is the most righteous of you. Indeed, Allah is Knowing and Acquainted.” (Surah Al-Hujurat: 13)

In the light of the above mentioned Ayat, Prophet Muhammad (SAW) said in his last sermon:

Religious Teaching Are the Torch Bearers of Dignified Human Life

"O people, no Prophet or Messenger will come after me and no new faith will be born. Therefore, understand the words which I convey to you. I will leave two things; the Quran and the Sunnah, and if you follow these you will never go astray."

The holy Prophet of Islam asked people to spread his message to others so that they also could get the blessings of success on the enlightened path to life hereafter.

The following sermon was delivered on the Ninth day of Dhul-Hijjah, 10 A.H. (623AD) in the Uranah valley of Mount Arafat in Mecca. It was the occasion of the annual rites of Haj. It is also known as the Farewell Pilgrimage.

After praising and thanking Allah the Prophet (SAW) began with the words:

"O, People! Lend me an attentive ear, for I know not whether after this year I shall ever be amongst you again. Therefore, listen carefully to what I am saying and take these words to those who could not be present here today."

"O, People! Just as you regard this month, this day, this city as Sacred, so regard the life and property of every Muslim a sacred trust. Return the goods entrusted to you to their rightful owners. Hurt no one so that no one may hurt you. Remember that you will indeed meet your Lord and that he will indeed reckon your deeds."

"Allah has forbidden you to take usury, therefore all interest obligation shall henceforth be waived. Your capital is yours to keep. You will neither inflict nor suffer any inequality. Allah has judged that there shall be no interest and that all interest due to Abbas Ibn 'Aal-Muttalib be waived."

"Every right arising out of homicide in pre-Islamic days is henceforth waived and the first such right that I waive is that arising from the murder of Rabiah ibn al-Harithiah."

"O, men! The unbelievers indulge in tampering with the calendar in order to make permissible that which Allah forbade and to prohibit what Allah has made permissible. With Allah, the months are twelve in number. Four of them are holy, there are successive and one occurs singly between the months of Jumada and Shaban."

"Beware of Satan, for the safety of your religion. He has lost all hope that he will be able to lead you astray in big things so beware of following him in small things."

"O People it is true that you have certain rights concerning your women but they also have rights over you. Remember that you have taken them as your wives only under Allah's trust and with His permission. If they abide by your right then to them belongs the right to be fed and clothed in kindness. Do treat your women well and be kind to them for they are your partners and committed helpers. And it is your right that they do not make friends with anyone of whom you do not approve, as well never to be unchaste."

"O, People! Listen to me in earnest, worship Allah, say your five daily prayers, fast during the month of Ramadan, and give your wealth in Zakat. Perform Haj if you can afford it."

"Do not, therefore, do injustice to yourselves. Remember one day you will meet Allah and answer your deeds. So beware, do not astray from the path of righteousness after I am gone."

"O, People! No Prophet or apostle will come after me and no new faith will be born. Reason well, therefore O People! And understand the words that I convey to you. I leave behind me two things, the Quran and the Sunnah and if you follow these you will never go astray."

"O Allah, be my witness, that I have conveyed your message to Your people."

(At the request of the Prophet of Islam, the sermon was repeated by Rabiah (RA), who had a powerful voice.)

Following Ayat from Surah Al-Maidah was revealed during the last sermon that the Holy Prophet of Islam recited to the gathering:

"Today I have perfected for you your religion, and completed My blessing upon you, and approved for you Islam as religion" (Surah Al-Ma'idah:3)

Bringing Serenity and Tranquillity in the World Society

Our world today has fallen prey to inequality, hatred, supremacism and disrespectful attitude towards our fellow women folk among many other negativities of the social environment. And we, the human being are watching the happenings, helplessly, as if there is nothing we can do to bring the world order back to its humane face that is ingrained in our social fabric.

It is not only that we have forgotten the message of the Holy Quran and the Prophetic traditions but all the messages Allah the Most Gracious has revealed to human beings through His Holy Books and the prophets sent in all the communities.

Religious leaders like Prophet Muhammad, Pbuh (Prophet of Islam), Guru Nanak (founder of Sikhism), The Buddha (founder of Buddhism), Zoroaster (founder of Zoroastrianism) and Rishabhanatha (the first Tirthankara), to name a few and scholars of every age and strata of the society have advocated pluralism and humane ethics, for the world to be a dwelling of peace, serenity and tranquillity. The world should follow them and be at peace with ourselves and others.