Why Murad Wilfried Hoffman’s Death Did Not Receive Adequate and Commensurate Media Attention?

ON Tuesday Jan 14, 2020, in the morning, I was in my office doing work after having glanced through the news in various online media outlets. I received a message from my wife saying that Murad Wilfried Hofmann (born 1931) died the previous day and that she learnt the information from Facebook. 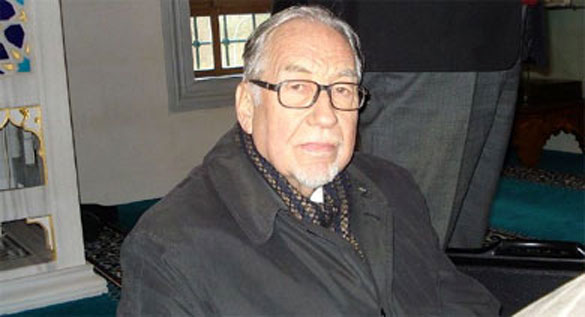 Soon afterwards, she shared with me a Facebook status of Yale graduate and American scholar Yasir Qadhi. He posted:

I was saddened to hear of the death of Murad Hoffman … [who] wrote several profound books on Islam and the Muslim experience in Europe…. I had the honor of meeting him…. I asked him how he dealt with his conversion to Islam as an ambassador…. He said, “I told them that this was my personal choice and that I felt you should be aware of this decision; they replied back that as far as they were concerned my religion was none of their business and that as long as it wouldn’t affect my work, it should not affect my career in the slightest!”

After receiving the shocking news of Hofmann’s death from my wife, I sifted through the Internet for more details and for other related information about his demise. My efforts were met with little success, as after several attempts I found only two reports on his death.

I saw no obituary at all for the German ambassador and scholar. The silence of the so-called mainstream news organisations on the death of this writer perplexed me and made me wonder about the politics of media representation and media’s neglect of certain groups of people.

What would the media coverage be like had a comparable western or secular writer of non-Muslim background died? What are the reasons why Hofmann’s death did not receive adequate and commensurate media attention?

Islamophobia and hatred of Muslims? Muslims’ inability to promote and create an interest in writers and scholars like Hofmann? A combination of these and similar reasons? – Such questions have vexed me and a sense of bewilderment has crept in. This and my personal recollections of the man partly prompted me to write this essay.

Whatever the reason behind the neglect of such writers, oblivion about their work is a collective loss because writers are part of our common human heritage.

They are our friends in the deepest sense and “our most incisive critics and self-critics”. They are our visionaries and companions in our common effort to discern the meaning of life; they are our guides to gaining an awareness of real life and real time, as they represent themselves as well as us the readers in the act of writing.

Writers live by their words. Media’s bias against writers of a certain religious community may not keep them neglected or forgotten forever.

There is a deep psychic connection between writers and readers. The former write for the latter, and the latter are always in search of the former. Once the readers come across the writings they appreciate, they immediately form a spiritual bond with their authors.

No geographical, cultural, religious or ideological barrier can prevent this rapport.

However, the inability of those whose job it was to promote Hofmann and make his works known to a wider audience is most puzzling. The absence of adequate number of competent researchers and research organisations among Muslims is evidently appalling.

Many research establishments run by so-called Islamic people are not focused or fit for purpose. Muslims are demonstrably underrepresented in the realm of knowledge and information.

As the great Bangladeshi scholar Syed Sajjad Husain said in A Young Muslim’s Guide to Religions in the World (1992): “Many of the real Islamic values, especially the emphasis on knowledge as the key to salvation, find greater adherents outside Islam today than within it” (pp.3-4).

One reason why many writers of Muslim heritage are not considered universal enough to warrant wider academic attention or mainstream cultural reference is the unnecessary characterization of them as "Islamic".

Many Muslims have the tendency to use the prefix "Islamic" for writers of Islamic background. This tendency of identity-centeredness often contributes to making such writers parochial and keeps them from being mainstream.

This is largely not the case with writers of other religious backgrounds. For example, most prominent western writers are of Christian or Jewish background but are not known by their religion. We do not hear terms like "Christian writer", "Christian poet", "Christian philosopher", "Christian scholar", etc.

Unfortunately, the overenthusiasm to describe writers from Muslim background as "Islamic" for no good reasons has not fared very well in terms of making them universal and allowing people of other religions or no religions to benefit from them.

Perhaps, this "over-Islamisation" of writers like Hofmann drifted readers of non-Muslim backgrounds away from them, as they do not feel the need of studying a writer who is ghettoised into one religious community.

As a result, only a section of readers study such writers; and unless there are research or other involuntary reasons, ordinary non-Muslim readers generally distance themselves from writers who are overly identified as "Islamic".

Consequently, despite the explosion of knowledge and information in the 21st century, the message of Islam and its teachings are still mostly wrapped and sealed in a cloud of obscurity and mystery.

When I met Hofmann in the UK in 2000 I had lived in the country only for a few weeks. I was attending his weeklong lecture series at Markfield Conference Centre in Leicestershire. We stayed in the same building and used to chat over breakfast when he was not occupied with other people or with tasks that were more important.

Conspicuous by his tall and majestic figure, he was the first German I had ever met in person. His scholarly composure, intellectual precision and articulate conversational skills impressed me a lot, and I considered myself truly fortunate to have met and listened to him.

I admired his ability to handle question-and-answer sessions smartly – in a calm and confident manner – avoiding confrontation when addressing critical comments from the audience. I became more acquainted with the depth of his insight and the clarity of his thoughts when I started reading him. His Islam 2000 (1996), Journey to Makkah (1998) and Journey to Islam: Diary of a German Diplomat (1951 - 2000) (2001) left a lasting impression on me.

Born a Catholic in Germany’s Aschaffenburg, Hofmann began his university education at Union College in New York in 1951. Then he studied law at Munich and Harvard Universities with a PhD in jurisprudence from the former in 1957 and a Master of Law from Harvard Law School in 1960.

A prolific author of about a dozen books and an eloquent speaker, Hofmann embraced Islam in 1980, performed hajj in 1992 and describes his hajj experiences and his thoughts and reflections on various aspects of Islam in Journey to Makkah.

Although his acceptance of Islam sent a shock wave through some sections in Germany and spurred political debate, he was not discriminated against in career development opportunities for his religious belief or for his views on religious matters. In 1984, on behalf of the federal government, Karl Carstens (1914-1992) – Germany’s fifth President (1979-84) – awarded him the Order of Merit of the Federal Republic of Germany for his contributions to the public welfare. It is Germany’s most important public recognition its first President Theodor Heuss (1884-1963) created in 1951.

The government distributed his German book Tagebuch eines deutschen Muslims (Diary of a German Muslim [1985]) to all its foreign missions in Muslim countries as a manual how to operate in Muslim-majority societies.

He began his over three-decade long diplomatic career in 1961 and ended it in 1994. His conversion to Islam did not deter him from climbing higher in the career ladder.

From 1983 to 1987, he served the North Atlantic Treaty Organisation (NATO) as its Director of Information in Brussels. In 1987, the German government appointed him its ambassador to Algeria and he remained in that position until 1990. He ended his career as Germany’s ambassador to Morocco from 1990 to 1994.

In his memoirs and diaries, he makes it clear that in his own life he never experienced any dichotomy of being a Muslim and a European. He successfully balanced being a Muslim and a western diplomat, and demonstrated that the two are not necessarily at odds with each other and that Islam does not encumber one’s career progression.

Although Hofmann had a smooth career that can be envied by many, his book Der Islam als Alternative (1992) which was later translated into English as Islam: The Alternative (1997) caused a great uproar in Europe, especially in the German media establishment. Here he presents Islam as the only available alternative for western societies.

Many found it difficult to accept his argument that, after Europe had tried many isms and philosophies, Islam is the only alternative that will remedy her woes and societal challenges in particular and global crises in general.

Published by the well-known German press Eugen Diederichs Verlag soon after the First Gulf War (1990-91), the book received negative reviews mainly from the dominant critics of Islam in Germany.

They even attempted to stall its publication on a flimsy excuse that it promotes “fundamentalism, corporal punishment, stoning and cutting off of hands”. They also “demanded his recall from Morocco where he was the German Ambassador” at that time.

However, once the book came out in print and its intellectual merit and rigour became evident, the hostility to it and to its author subsided.

In the book, Hofmann makes an emphatic point that the Hesperian (western) societies are on the brink of failure, morally and socially, as people’s spiritual needs are not catered to and their attempts to give meaning to life are somewhat ineffectual.

According to Hofmann, the moral and spiritual predicament of the west increases the possibility of Islam’s wider acceptance among the people there, as the religion has the potential to provide a spiritual basis for a universal framework for human development and civilisation. He also envisions a greater responsibility Muslims have to shoulder in this regard by way of living Islam in its truest sense and exemplifying the Islamic faith and its ethical principles in their own lives.

Hofmann’s contribution to scholarship in the field of Islam is reminiscent of that of Leopold Weiss (Muhammad Asad [1900-92]) whom he regards as “Europe’s Gift to Islam” and to whom he paid a generous tribute.

Original Headline: Death of Murad Hofmann: Some thoughts and recollections