In 2010, the bestselling atheist Richard Dawkins, in the “On Faith” section of the Washington Post, called the pope “a leering old villain in a frock” perfectly suited to “the evil corrupt organization” and “child-raping institution” that is the Catholic Church. Nobody seemed to mind very much.

Three years later, in a throwaway Tweet, Professor Dawkins observed that “all the world’s Muslims have fewer Nobel Prizes than Trinity College, Cambridge. They did great things in the Middle Ages, though.” This time round, the old provocateur managed to get a rise out of folks. Almost every London paper ran at least one story on the “controversy.” The Independent‘s Owen Jones fumed, “How dare you dress your bigotry up as atheism. You are now beyond an embarrassment.” The best-selling author Caitlin Moran sneered, “It’s time someone turned Richard Dawkins off and then on again. Something’s gone weird.” The Daily Telegraph‘s Tom Chivers beseeched him, “Please be quiet, Richard Dawkins, I’m begging.” 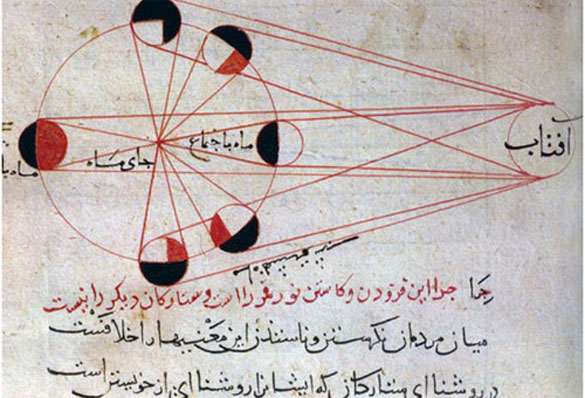 Wikimedia CommonsIllustration by Persian scholar Al-Biruni (973-1048) of different phases of the moon, from his masterpiece Kitab al-Tafhim

None of the above is Muslim. Indeed, they are, to one degree or another, members of the same secular liberal media elite as Professor Dawkins. Yet all felt that, unlike Dawkins’s routine jeers at Christians, his Tweet had gone too far. It’s factually unarguable: Trinity graduates have amassed 32 Nobel prizes, the entire Muslim world a mere 10. If you remove Yasser Arafat, Mohamed ElBaradei, and the other winners of the Nobel Peace Prize, Islam can claim just four laureates against Trinity’s 31 (the college’s only peace-prize recipient was Austen Chamberlain, brother of Neville). Yet simply to make the observation was enough to have the Guardian compare him to the loonier imams and conclude that “we must consign Dawkins to this very same pile of the irrational and the dishonest.”

Full disclosure: Five years ago, when I was battling Canada’s “human rights” commissions to restore free speech to my native land, Richard Dawkins was one of the few prominent figures in Her Majesty’s dominions to lend unequivocal support. He put it this way: “I have over the years developed a dislike for Mark Steyn, although I’ve always admired his forceful writing. On this issue, however, he is clearly 1000% in the right and should receive all the support anybody can give him.”

Let me return the compliment: I have over the years developed a dislike for Richard Dawkins’s forceful writing (the God of the Torah is “the most unpleasant character in all fiction,” etc.), but I am coming round rather to admire him personally. It’s creepy and unnerving how swiftly the West’s chattering classes have accepted that the peculiar sensitivities of Islam require a deference extended to no other identity group. I doubt The Satanic Verses would be accepted for publication today, but, if it were, I’m certain no major author would come out swinging on Salman Rushdie’s behalf the way his fellow novelist Fay Weldon did: The Koran, she declared, “is food for no-thought … It gives weapons and strength to the thought-police.”

That was a remarkably prescient observation in the London of 1989. Even a decade ago, it would have been left to the usual fire-breathing imams to denounce remarks like Dawkins’s. In those days, Islam was still, like Christianity, insult able. Fleet Street cartoonists offered variations on the ladies’ changing-room line “Does my bum look big in this?” One Burqa-clad woman to another: “Does my bomb look big in this?” Not anymore. “There are no jokes in Islam,” pronounced the Ayatollah Khomeini, and so, in a bawdy Hogarthian society endlessly hooting at everyone from the Queen down, Islam uniquely is no laughing matter. Ten years back, even the United Nations Human Development Program was happy to sound off like an incendiary Dawkins Tweet: Its famous 2002 report blandly noted that more books are translated by Spain in a single year than have been translated into Arabic in the last thousand years.

What Dawkins is getting at is more fundamental than bombs or Burqas. Whatever its virtues, Islam is not a culture of inquiry, of innovation. You can coast for a while on the accumulated inheritance of a pre-Muslim past — as, indeed, much of the Dar al-Islam did in those Middle Ages Dawkins so admires — but it’s not unreasonable to posit that the more Muslim a society becomes the smaller a role Nobel prizes and translated books will play in its future. According to a new report from Britain’s Office of National Statistics, “Mohammed,” in its various spellings, is now the second most popular baby boy’s name in England and Wales, and Number One in the capital. It seems likely that an ever more Islamic London will, for a while, still have a West End theatre scene for tourists, but it will have ever less need not just for Oscar Wilde and Noël Coward and eventually Shakespeare but for drama of any kind. Maybe I’m wrong, maybe Dawkins is wrong, maybe the U.N. Human Development chaps are wrong. But the ferocious objections even to raising the subject suggest we’re not.

A quarter-century on, Fay Weldon’s “thought police” are everywhere. Notice the general line on Dawkins: Please be quiet. Turn him off. You can’t say that. What was once the London Left’s principal objection to the ayatollah’s Rushdie fatwa is now its reflexive response to even the mildest poke at Islam. Their reasoning seems to be that, if you can just insulate this one corner of the multicultural scene from criticism, elsewhere rude, raucous life — with free speech and all the other ancient liberties — will go on. Miss Weldon’s craven successors seem intent on making her point: In London, Islam is food for no thought.