Women from the Western Balkans and elsewhere are as attracted to the Islamic State as much as men, a paper published by the Belgrade Centre for Security Policy think tank, say.

The roles of women in the Islamic State and the messaging that the group uses to lure women to Syria and Iraq are sufficiently different, however, to warrant a gender-based perspective in countering violent extremism, it adds,

The paper estimates that around 10 to 15 per cent of all Islamic State recruits are women, more than 110 of whom are from the Balkans and have been in Syria and Iraq since the conflict started in 2011. Most come from Kosovo - 42. In second place are women from Bosnia and Herzegovina - 36, followed by Albania - 29. Serbia and Croatia sent only one to four each.

Research notes no single profile of the typical female recruit. However two distinct groups are evident. First are women as young as 15 who travel to ISIS territory to marry a jihadist. Second are women who are already married and travel with their husbands.

For young women still living with their parents, evidence from the Western Balkans and elsewhere shows that parents usually had little to no prior indication that their daughters were being radicalized or intended to depart for Islamic State-held territories.

The paper notes that “the women who migrate have taken on a variety of roles, and although they are predominantly expected to keep to the domestic sphere, their participation is still critical for developing the Islamic State‘s ‘Caliphate’ into what they believe will be a Muslim utopia”.

They also help expand the Islamic State‘s network by recruiting other women. Women are barred from taking up combat, and while they do not pose a security threat to European countries at present, they could be trained to become suicide bombers or fighters in future, the paper say.

Reasons for Joining the Caliphate: 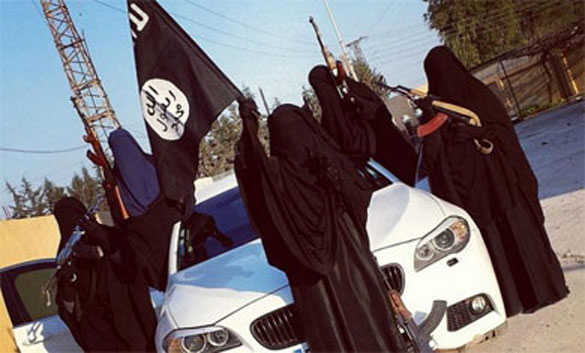 While women from the Western Balkans are travelling to Syria or Iraq for many of the same reasons as women from other parts of the world, high unemployment, ineffective government institutions and the inability of Islamic communities to establish control over radical mosques are three sets of factors which are unique to the Western Balkans, according to the paper.

High unemployment and the lack of meaningful opportunities for both women and men have been listed as significant contributing factors to the region’s radicalization problem.

Ultra-conservative, Wahhabi charitable non-governmental organizations from the Persian Gulf, particularly from Saudi Arabia, have a significant presence in countries like Bosnia, Kosovo, and Albania through funding mosques, training imams, and organizing lectures and community programs.

The influence of these institutions grew after the Yugoslav wars of the 1990s and is a systematic problem as these countries have failed to control them. A number of so-called para-mosques have also emerged, which Balkan countries also struggle to control.

Ongoing trials in the region show that many of those now fighting in Syria and Iraq were recruited through such institutions.

Like men, women were also lured to Islamic State by its propaganda. According to the paper, a few elements of Islamic State propaganda affected women in particular, including romanticism of the conflict, ideology via online propaganda, a feeling of “sisterhood” and women’s empowerment in the Islamic State.

According to current information, women from the Western Balkans are migrating to Syria and Iraq for the same reasons as women from Western Europe or other parts of the world. As with other regions, there is no “typical” female migrant; women range in age from 15 to mothers in their early 30s; additionally, women come from a mix of backgrounds, including women who are well educated and from wealthier backgrounds.

The research notes that while women do not play a leading role in propaganda, women take an active part in the production of messages directed towards other women: despite the stereotype of female migrants as submissive and silent, women propagandists are often portrayed as “outspoken and assertive“ and just as likely to engage in divisive, raging debates as men.

Islamic empowerment messaging serves to show women that they can escape marginalization or oppression and exercise control over their lives by migrating to the Islamic State.

Life for women in the Western Balkans and in other non-Muslim societies - where women may feel pressured to wear makeup and revealing clothing, and are the objects of sexual appeal - is portrayed as vain, materialistic, secular, and contrary to Muslim beliefs. Under Islamic State ideology, migration becomes “the ultimate form of self-expression” for women.

Beyond this sense of “empowerment”, women are attracted to the Islamic State by the concept of “sisterhood”. Women recruits believe the Islamic State will integrate them into a support network of women with similar beliefs, giving them a sense of belonging.

Failure To Address The Underlying Causes:

The policy paper says countries in the Balkans have failed to address the problem of female migration to the Islamic State.

Although fighting in foreign conflicts has been criminalised, and with this, governments are taking action to punish participants in violent extremism, they do not address the underlying causes to prevent other individuals from radicalizing and migrating.

Researchers also note that there is little evidence that police and the courts have the know-how to address women in extremist groups and terrorism in general.

The justice system must be able to gather credible evidence and use it properly, as well as understand events in the Islamic State and the ideological appeal of the group, the report notes.

It notes that prison sentences offer no opportunity for women or men who become disillusioned with the Islamic State, and who comprehend the seriousness of their actions, to reject violent extremism or extremist ideological beliefs.

Finally, while criminal legislation serves as a deterrent for potential recruits, the threat of a prison sentence also discourages women who want to escape the Islamic State and return home.

By failing to encourage women recruits to return, states miss out on the opportunity to rehabilitate them and to help them reintegrate into a non-violent society. The absence of a comprehensive approach runs the risk of the women joining other terrorist groups or continuing to recruit more individuals, it was underlined.