Drugged Infants on the Streets of Pakistan

I’ve seen newborns on drugs and so have you. Unfortunately, so has every MPA, MNA, human rights activist, police official, mother and father.

Recently, a woman holding a newborn came to my window to beg. I struck her a deal — Rs5,000 on the spot if she could wake the child up for me. Immediately, she went about trying to wake the baby she was carrying. I waited, knowing all along that the child wouldn’t wake up but desperately hoped he would. 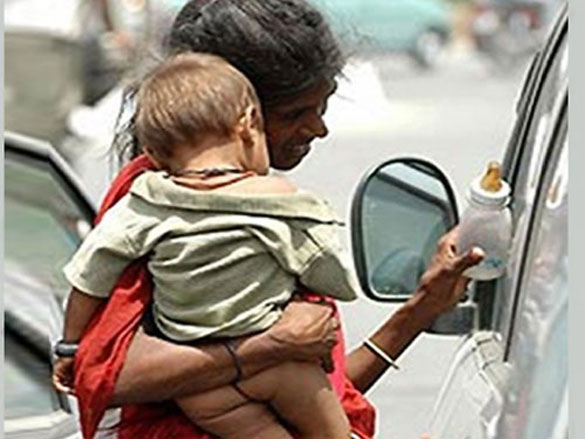 As expected, the child seemed lifeless. She sheepishly said,

“You know, he’s sleeping on a full stomach. He will wake up later.”

Either these women receive special children from the heavens to make their trade easier or it’s exactly what we choose to ignore — babies on sedatives and drugs.

How many of us know infants who sleep throughout the day?

How many of these infants lie still even when awake?

Women out on the streets have conceded, in media reports, to using these means out of desperation. It’s a simple question that needs to be answered: why do these children, found at every traffic light, bazaar and intersection go unnoticed?

This issue has a simple pick-up-and-move-to-jail scenario. You have clearly identifiable criminals, with the evidence wrapped in a sheet in their arms.

Under Pakistan’s law, begging is a crime and punishable by up to three years in prison. However, this law is rarely ever implemented and convictions in this regard are rare. There needs to be a non-bailable arrest warrant issued for any person found carrying a sedated infant. It would be a good experiment to see how many mafias are willing to put their cash cows in lock-up for an entire year.

I have vowed not to spare change to beggars with amputations and small children. We know the tale behind their missing limbs and we know how heavily sedated these children are, but we continue to feed their inhumanity. It strengthens their belief that such torture to children is justified — for it wins sympathy and crisp currency.

A boycott of such beggars should get them to return to the drawing board or to simpler tricks from the past — wearing glasses and carrying a stick. I have had enough of their atrocities being blurred behind the screen of charity; there is only so much a Pakistani can take.