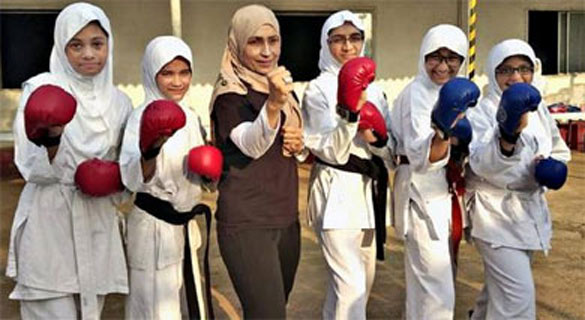 On Instagram, 19-year-old Haleema Momin calls herself ‘Hijabi Beast’. The athlete from Jogeshwari who performs callisthenics stands out not only for her choice of career but also her attire.

“People who don’t know about Islam assume that hijab is a sign of oppression. For me, the hijab brings a sense of security, strength and dignity. I get a lot of support and attention because of my hijab,” said Ms. Momin, who is trained in power lifting and martial arts.

The teenager, who works as a personal trainer, is all set to perform a range of moves like the headstand, handstand, superman push-ups and flips at YB Chavan auditorium on February 1, World Hijab Day. She will share stage with an international karate referee, a biker, a calligrapher and other women who wear the hijab by choice and take pride in it.

The first-of-its-kind event has been organised by the non-profit Al Hadi Organisation with the aim of shattering the popular belief that the hijab is an obligation and not a choice. “I started wearing the Hijab at the age of 41. It was a sudden consciousness that dawned upon me and I became a Hijabi,” said Mazgaon resident Shaheen Akhtar, a World Karate Federation referee and the first female karate referee in south Asia. Ms. Akhtar was lucky that in the same year, 2014, the World Karate Federation introduced the Hijab as a part of the attire for referees. Her 26-year-old daughter, who holds an MBA and works with a multinational company, does not wear a Hijab. She said, “My mother always told me that our religion calls for it, but never forced me to wear the hijab. I made my own choice and I will let my daughter make her own choice too.”

The event also aims at highlighting the bias against Hijabis in schools, colleges and workplaces. “It took so many years for television channels to have hijabi anchors. Why?,” asked 29-year-old Fatema Zaidi Mirza, an anchor with Channel WIN (World Islamic Network) and one of the presenters at the February 1 event. Ms. Mirza will also share her own story of being asked to remove her headscarf while in school, which later resulted in her parents filing a court case. “Even today, there are so many schools that do not allow Muslim girls to wear the hijab and women are asked to remove it at many places,” she said.

Shabana Sadik Husein Pattawala, founder of Al Hadi Organisation, said the event will bring together women from all Muslim sects. She said, “The message we want to spread is that women can do wonders wearing a Hijab, and wearing it does not hide their talent. The speakers and performers at the event will bear testimony to this fact.”

Jyoti Shelar is an Assistant Editor with The Hindu, Mumbai. While her primary focus is healthcare, she often writes on communities and related trends.