The Story of Yusuf and Zulaykha Rejects Victim Blaming, Shows That Rape Is About Abuse of Power

2.    Many support PM Imran Khan’s deflection on rape to lack of purdah (veil).

3.    General Zia ul Haque, the so called “Islamic system” blamed women victims of rape and threw them in prison.

4.    Pakistani women, save for a few women in show business, are dressed up modestly.

Many Pakistanis don’t seem to understand that rape is about abuse of power. This is because many support PM Imran Khan’s deflection on rape to lack of purdah (veil). Similarly, many believe that the young man was equally complicit in the recent sexual abuse case that involved Mufti Aziz ur Rehman. The inability to understand a simple moral concept of the lack of consent and abuse of power has to do with a poor understanding of Islamic ethics. Additionally, it has to do with the deflection towards cultural imperialism, as people defend Islam against western values. However, recognizing lack of consent and abuse of power is as Islamic as it is western. Therefore, always appropriating Islam to react to the West is demeaning to its hallowed teachings.

Islam recognizes abuse of power and rejects victim blaming. The greatest proof of this comes from the incident of Yusuf and Zulaykha. The story teaches Muslims that straight men can be subjected to rape as well, as she tore his shirt from behind. It is obvious that Yusuf was properly dressed and yet Zulaykha pounced upon him. His physical strength was of no consequence, as she was in a position of power and privilege. In the end, Yusuf was blamed and thrown in prison. This incident teaches Muslims that rape is about abuse of power and also shows how victims are blamed and punished.

This lesson should have been learned by Pakistani Muslims. Yet, under General Zia ul Haque, the so called “Islamic system” blamed women victims of rape and threw them in prison. 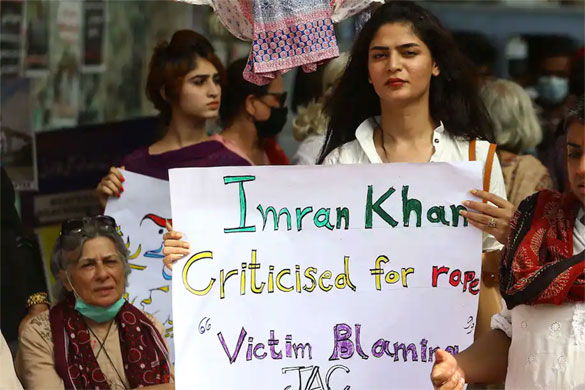 Victim blaming continues to date under PM Imran Khan and as cases of madrassa abuse come to the limelight. Indeed, people refused to see the Mufti Aziz ur Rehman case as one of abuse and argued that just because the young man had physical strength, he could not have been sexually abused. But again, physical strength is easily overmatched by power, position, privilege and rank. Consider the institution of slavery where physically strong men were kept mentally weak and abused by weaker men who were in positions of power. The same holds for madrassa students, no matter how old, as they are mentally trained to submit without question.

The cultural imperialism argument seems to be overrated. After all, Pakistanis consume Hollywood movies, aspire to act in western films or covet Oscar awards out of intentional choice. Young folks listen to western singers and adopt western mannerisms out of free choice. Yet, they have also decided what to adopt and what to leave. For instance, children living with their parents, parents looking after them through university, and children looking after their aging parents continues unabated in Pakistan. The Pakistani shalwar kameez remains the dress choice for a vast majority of women and many men despite the fact that in other countries like China, the western dress has been largely adopted. Perhaps, the lens needs to change from cultural imperialism towards cultural exchange, where both western and eastern folks borrow freely and equally from the best of each other’s traditions and values.

In essence, instead of harping on cultural imperialism, as no one can impose foreign customs on the pain of force, Pakistanis need to reflect on the hallowed teachings of Islam by revisiting the story of Yusuf and Zulaykha that recognizes rape as abuse of power and rejects victim blaming.