Tahaffuz-i-Bunyad-i-Islam Bill: The Muslim Faith Is Not Limited to Pakistan

THE presumptuously titled Tahaffuz-i-Bunyad-i-Islam Bill that was adopted with undue haste by the Punjab Assembly some time ago continues to generate controversy at various forums with the objections that had persuaded the governor to withhold assent not being addressed. 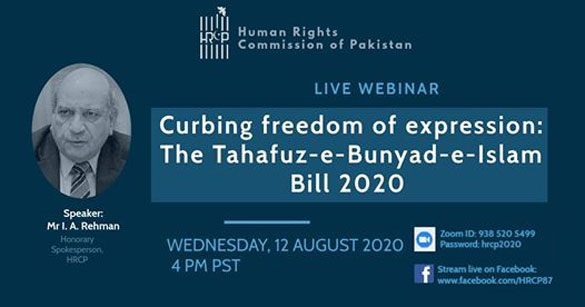 When the Punjab Assembly met on Friday last, several members rushed to disown the bill they had earlier enthusiastically and unanimously adopted. One member said the bill had been adopted at the bidding of Shahzad Akbar, the federal government’s anti-corruption boss. He has not denied the imputation nor is there any evidence of Punjab’s religious affairs having been put into the package of the previous governments’ misdeeds. The matter is important as it touches on, among other things, centre-province relations under the present regime.

A special assistant to the prime minister (SAPM) has no legal authority to issue orders to a provincial government or assembly except for compliance with regulations about central services. It seems the culture of governance created by the government has reduced the provinces to the level of subsidiaries of the central authority. This equation is going to cause serious problems.

Before the assembly proceedings could begin, Yawar Abbas Bokhari apologised for having supported the bill and having failed to realise that the measure had been designed to divide the people. Hassan Murtaza (PPP) appeared to complain that he had been made a member of the committee but was not informed of the procedure. Several PTI members also alleged that the bill was designed to split the Muslim community. This could mean that a few Shia members had discovered some undesirable features of the bill after the Shia Ulema Council had roundly denounced it. But these protests did expose an extra-democratic tendency to approve legislative proposals without due deliberation.

But what was the Punjab government doing about the bill? The bill was going to be applied to the entire Muslim population of Punjab. Was the bill approved or even discussed by the Punjab cabinet? What was the level of the provincial chief minister’s awareness of the bill, assuming that he was not unaware of it? Did the party whip play any role in the passage of the measure? When the Shia ulema made a strong protest and the speaker of the assembly met them to assuage their feelings, was he acting as the prime mover of the bill or as a representative of the Punjab government?

While adopting the bill the provincial assembly assumed that the subject of religious affairs fell within the provincial legislative list. The position is not quite clear.

The Act of 1935 had a provision for ecclesiastical affairs, including European cemeteries. The constitution of 1956 made references to pilgrimage, zakat, and mosques but the subject of religious affairs was not mentioned as such. The 1962 document, described as the Ayub constitution, didn’t refer to religious affairs. The 1973 Constitution includes as legislative subjects’ Islamic education, zakat and Auqaf but not the subject of religious affairs. The provision in the Objectives Resolution regarding the state’s obligation to enable Muslims to order their lives in accordance with Islamic injunctions only means promotion of studies of the Quran and Sunnah. If the authors of constitutional documents avoided mentioning religious affairs as a subject for legislation in the belief that the state had no business to interfere in matters of religion, their farsightedness merits due recognition.

There are weighty reasons for not allowing a provincial assembly the power to make a law relating to religious affairs. Such a law will divide the country’s Muslim community because it will affect the provincial population only and place the rest of the country’s Muslim population at an advantage or at a disadvantage. If a provincial government feels the need for legislation touching on religious affairs, the proper course for it would be to request the federal authority to make a law for the whole country or take up the matter in the Council of Common Interests.

The Muslim faith is not limited to Pakistan. While in some parts of the Muslim world country-specific interpretations have been attempted, the fundamentals of Islam have universal application. Therefore, whenever legislation that touches on the fundamentals of religion — as determined not by a puny assembly but by a recognised institution or an established school of thought — is planned, it is considered necessary to find out the practice in other Muslim countries. Otherwise we could be guilty of fostering sectarian tendencies and putting strains on an already tenuous Muslim unity.

Further, the people have a disturbing feeling that hallowed democratic conventions are being subverted through none-too-concealed cunningness. When the question of opening the doors to the cabinet to non-elected persons was raised, the government undermined the debate by releasing SAPMs’ nationality status and debatable wealth status, neither of which was an issue.

If we find that federal principles are being ignored, that laws are being made without legitimate authority and without due deliberation, that the state is unaware of or uninterested in unauthorised interventions in matters of belief, and if non-elected persons are admitted into legislatures and the cabinet, thus denying the people’s right to be governed by a proper cabinet, and majoritarianism is followed with a vengeance, with no effort being made to deepen democratic practices, the system can only be described as a sham democracy.

Tailpiece: Lahore had a heavy downpour over the past weekend. As I drove through Model Town’s streets-turned-rivers I wondered whether Syed Murad Ali Shah had taken over the Model Town area because the only person who could be blamed for urban flooding is the Sindh chief minister.