The assumption that Muslims are more religious than other communities shapes popular perceptions about Islam and Muslims in India today. Be it the devoted god-fearing Pucca Musalman of the Hindi cinema of the 1970s or the contemporary radical Jihadists, Muslims are always portrayed as a community of religiously committed individuals.

Two crucial sets of questions arise about this perception of Islamist Muslims.

Second, do all Muslims in India practice Islam in the same way? Does caste divide among Muslims affect their religiosity?

These questions are asked directly in the CSDS-Lokniti’s Religious Attitude, Behaviour and Practices Survey 2015 – an all-India study covering 21 states with a sample size of 5,681 respondents.

The findings of the survey are quite instructive. Muslims do not think that they are ‘very religious’. Instead, most of them feel that they may well be described as ‘somewhat religious’ (Table 1). This Muslim self-perception cannot simply be called a reflection of minority psyche. 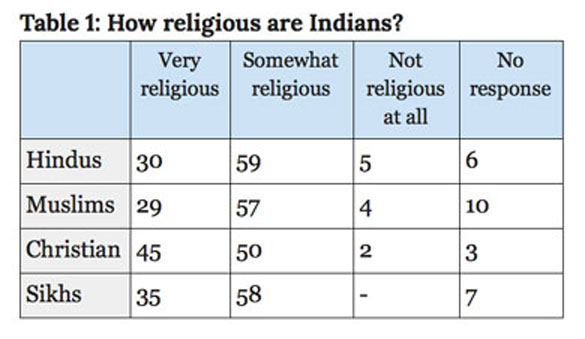 In fact, two other religious minorities – Sikhs and Christians – appear more confident than Muslims in asserting their religiosity. The Indian Christian community, actually, emerges as the most religious social group.

This somewhat religious attitude of Muslims must be seen in context of the debate, especially among Sunnis, about the growing worldly outlook of Muslims.

The decline of Islamic pre-eminence in contemporary world is seen as a direct consequence of non-Islamic values and practices. Although, the meaning and modes of achieving the true Islamic path are unsettled issues, there is a consensus that going ‘back to the original Islam’ is the ultimate solution.

Take the Tablighi Jamaat, for instance, which has emerged as one of the most powerful form of ritualistic Islam in the last three decades. The adherents of the Jamaat are encouraged to avoid all references to politics and asked to devote themselves to what is called deen ki Mehnat (struggle to consolidate faith).

Maulana Muhammad Yusuf, the second Amir (head) of the Jamaat, describes the purpose of Tabligh as an end in itself. In one of his published sermon, he says: ‘the manner in which Prophet Muhammad lived his life and worked for the Deen of Allah is Tabligh’.

Roman and Persian empires were like spider webs in Prophet Muhammad’s time. The Prophet worked on commitment-building among Muslims and prepared pure believers. Because of the presence of these pure believers, Allah cleaned the webs of Rome and Persia with his azab (punishment).

This overtly apolitical form of contemporary Islam functions in two different ways. Muslims are told that their spiritual beliefs as well as religious practices are not adequately Islamic. Therefore, they must give up unnecessary worldly considerations and consolidate their Islamic commitment.

At the same time, they are also asked to create a balance between Deen and Duniya (religion and this world), following the example of the early Islamic society of Prophet Muhammad. This is an effort to turn the somewhat religious Muslims into very religious ones.

Namaz and Roza, which are regarded as pillars of Islam (along with Tauheed, which is belief in one God and in Prophet Muhammad, Hajj or pilgrimage, and Zakat or charity), are not observed uniformly by all Muslims (Table 2) 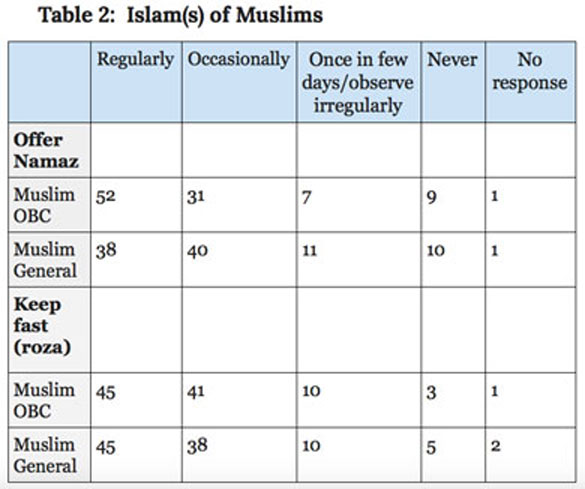 These practices as rituals are highly diversified (especially the Namaz) and every sect has its own tradition. But, it is also true that Muslims do not follow them on a regular basis. There is even a crucial distinction between OBC Muslims and upper caste Muslims – the former appear more practicing than the latter, which goes against the established public wisdom of painting everyone with intense religiosity.

It could be argued that Islamic religiosities do not entirely determine the everyday life of Indian Muslim communities. That is the reason why they describe themselves as somewhat religious.

At the same time, Islamic religiosities also refashion themselves to adjust with the requirements of a secular state. The evocation of deen ki mehnat by Tablighi Jamaat, instead of direct politics, is a good example of this Islamic recasting.

Hilal Ahmed is an associate professor, Centre for the Study of Developing Societies.