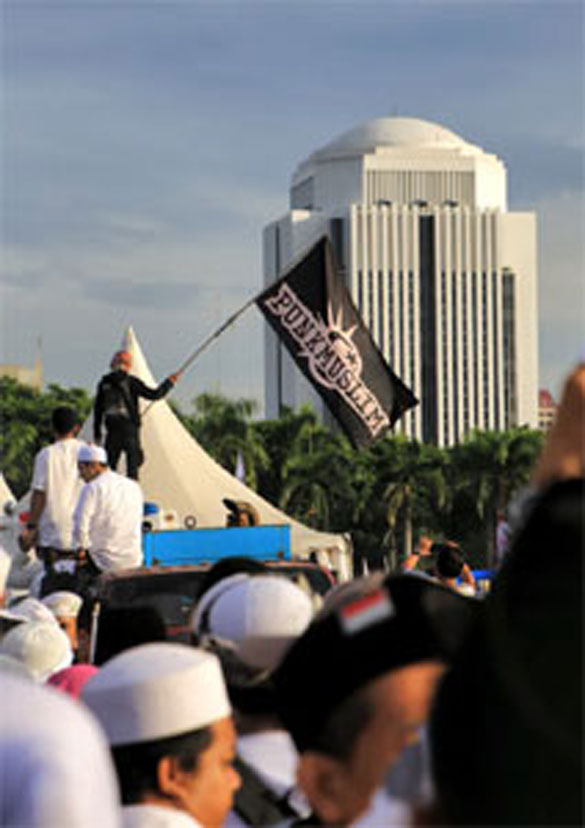 A member of Punk Muslim flies his collective’s flag at the 212 Reunion Rally in Jakarta on December 2 2017.Ian Wilson

The punk movement is notable for its anti-establishment stance and distinct music and fashion style. Starting in the 1970s in the UK and US, the subculture became global and took different forms in each local setting.

In Indonesia, punk bands started to emerge in the 1990s. They were central in nurturing leftist activism during the years leading up to the fall of Soeharto.

But, interestingly, in the years following the fall of the New Order regime, some of these “bad boys” have transformed into a group of pious people. They’ve built a new generation of punk subculture they call Islamic punk.

Between 1996 and 2001, the underground music scenes in Java, Sumatera and Bali became an important centre for radical left activism.

Local punks adopted leftist ideologies, such as socialism and anarchism, to challenge the authoritarian New Order regime. The ideology soon became dominant in the local music scene with the emergence of punk collectives with leftist views, such as the Anti-Fascist Front in Bandung, West Java, and the Anti-Oppression Front in Surabaya, East Java.

Sharing a vision to replace the authoritarian system with a democratic system, the local punk groups worked together with a prominent left-wing student organisation, the People’s Democratic Party (PRD).

Despite their relatively small numbers, these groups strongly influenced the development of activism within the underground music scene.

Punk Muslim represents the new face of the punk movement in Indonesia. Street punks Budi Khaironi, Bowo and humanitarian activist Ahmad Zaki formed the band in 2007. Punk Muslim works to empower street kids in the slum areas of Jakarta by providing religious education and social protection, and making them participate in social activism.

They also fight against punks’ negative stereotypes through religious activities to help their members reintegrate into mainstream society.

The fans of Punk Muslim have expanded to Surabaya, Bandung, and Bogor, Depok, and Bekasi in West Java. Apart from playing music, they also try to balance their routines by reading the Qur’an, attending sermons and proselytising on the streets.

Besides Punk Muslim, other punk groups include The Fourty’s Accident (Surabaya), Ketapel Jihad (Depok), Anti-Mammon (Bogor) and Melody Maker (Jakarta). Other Jakarta-based bands include Tengkorak, Kodusa and Purgatory, which are linked to an underground music group that adopts Islam as its ideological basis, One Finger Movement or Komunitas Salam Satu Jari.

My research supports Bruinessen’s view. However, in my article, Nevermind the Jahiliyyah, here’s the Hijrahs: punk and the religious turn in the contemporary Indonesian underground scene, published in Punk & Post-Punk, I also suggest that the emergence of Islamic punks is not simply due to religious radicalisation.

Indonesia’s turn to Islamic conservatism – marked by the 2005 fatwa or edict issued by the Indonesian Ulema Council (MUI) against secularism, liberalism and pluralism – did contribute to the Islamic punk emergence. From my research, many Indonesian punks took refuge in Islam following the fatwa.

But the perception that the emergence of the Islamic punks is only due to growing “Islamic radicalisation” among Indonesian youths is rather weak.

Rather, the emergence of Islamic punks in Indonesia’s post-authoritarian era is the result of a combination of state repression, commercialism and increasing religious conservatism.

The government’s control before and after the reform era weakened leftist ideology in Indonesia. Arrests of leftist activists on sedition charges deterred leftist groups, including punks, from showing off their political leaning.

Meanwhile, commercialisation has transformed punk’s “Do It Yourself” (DIY) ethos into a profit-making tool, as noted by anthropologists like Brent Luvaas and Sean Martin-Iverson.

“All hardcore punk scenes seem to only have one mission: to entertain audiences and sell merchandise,” said Dani Tremor, the vocalist of Bandung-based punk band MilisiKecoa.

Thus, with threats from the state and the market, the punk movement in Indonesia lost its leftist ideological foundation. This gave rise to a new kind of punk, one that’s driven more by conservative Islamic teachings.

Punk Muslim, for instance, considers the democratic system as haram (forbidden in Islamic law), even though this does not apply in case of an emergency. “If we don’t vote for the Muslim leaders, then the winners will be non-Muslims,” said Aik of Punk Muslim.

Jakarta-based Islamic trash metal band GUNxROSE, which is associated with Muslim hardline group Hizbut Tahrir Indonesia, completely refuses to participate in the democratic system on the grounds that democracy is contradictory to Islam.

The Islamic punk movement in Indonesia is more conservative than their counterparts in different part of the world. Members of Punk Muslim and One Finger Movement are generally hostile to liberal interpretations of Islam.

They despise leftist thoughts and LGBT communities, and adopt a sectarian position towards Shia and Ahmadiyyah. They also consider the liberal approach to Islam of the American Muslim punk scene Taqwacore as “un-Islamic”.

The pendulum of the punk scene in Indonesia has moved from left to predominantly right. This transformation shows the organic nature of Indonesia’s punk movement, which is easily affected by the social, political and economic changes in the post-New Order era.The Conversation

Original Headline; Punks, Starting in the 1970s in the UK and US Are Not Dead in Indonesia, They’ve Turned to Islam