Such is the seductive charm of modernisation that it has come to be seen as an answer to every problem as though simply mentioning it will magically transform a situation. Never mind if Gandhi wasn't greatly impressed. When asked what he thought of "modern civilisation" he famously retorted with a touch of sarcasm that, well, it was “a good idea”! 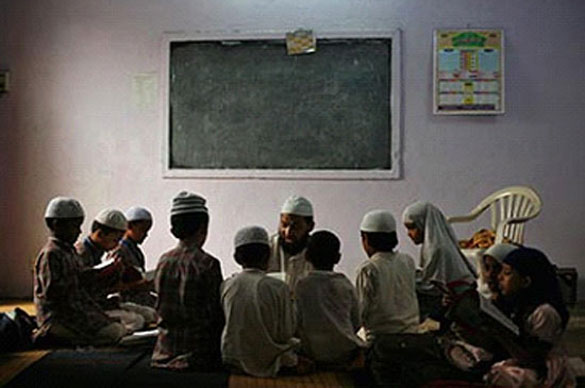 The current clamour for modernising madrasas is a case in point. I'm sure that the Modi government's plans to revamp them--a process initiated by UPA--are well-intended, and the conspiracy theories being spun in certain usually suspect quarters are just that: conspiracy theories.

The problem, however, is with the idea itself. It is fundamentally flawed for the simple reason that it seeks to package madrasas as a substitute for regular schools by grafting the odd trappings of 21st century education on to an ancient system conceived for a very different purpose.

Does anyone seriously believe that by bringing in computers and adding a few secular courses to a heavily theological curriculum, madrasas will be transformed into an alternative to modern education that Muslims so desperately need? A Burqa doesn't become less antiquated and oppressive just because it gets a designer label and is sold at Harrods.

What Muslims need is access to good mainstream education and mixed secular institutions where they can integrate with others in the society, not ghettos with a dash of faux mainstreaming. For it is as much about what madrasas teach as about the milieu in which they exist and the culture they promote.

Madrasas are seminaries, and like all seminaries—Christian, Jewish, Hindu—they are not open and inclusive places. Rather they operate in a closed and isolated environment and while they may not consciously promote exclusion they remain inherently insular. That’s the nature of the beast.

Misogyny and homophobia are widely prevalent in madrasas because of the cultural values of those who run them and a narrow interpretation of religious texts.

Most madrasas practice gender segregation arguing that co-education is anti-Islamic. Co-education is officially banned in madrasas run by the Uttar Pradesh Board of Madrasa Education on grounds that it is against the “Sharia’’. But even in states where there is no such official ban, co-education is discouraged and there are separate girls’ madrasas where they are forced to follow strict “Islamic’’ practices.

Here’s a revealing glimpse of the life in a girls’ madrassa as documented by Yoginder Sikand, a leading expert on Islam and Muslim societies on the subcontinent.

“A major focus of the teaching imparted at the madrasa has to do with the internalization of appropriate gender norms as defined in the Deobandi vision. Thus, strict Purdah is rigidly enforced. Girls are not allowed to step outside the madrasa, not even for a walk or to make purchases in the local market. The only occasions when they can leave the madrasa are when their male guardians come to pick them up before the annual holidays, or in case of a medical emergency, when they must be accompanied by a close male relative. All their teachers, with one exception, are females; most of them graduates of the madrasa itself. The only male teacher is not allowed to see the students. He delivers his lecture into a microphone while seated in a room on the ground floor, and the girls sit in rooms on the first floor and listen to his discourse. If they have any questions they relay them to him through a microphone,’’ he wrote in an article for the Mumbai-based Islamic Research Foundation International.

Strict “Islamic’’ rules of behaviour down to how they dress also apply to men. Try spending sometime at a madrassa and its mono-cultural and austere atmosphere will get to you. Throwing in a few “modern’’ courses is not going to change that. By all means let madrasas have computers and get them to teach Maths or whatever, but let’s not pretend that attending a madrassa with a computer room and English textbooks is like attending a normal school.

The primary purpose of madrasas is to teach Islamic theology and that will remain their basic function. Besides that is what they are good at doing. People go there to learn theology, not computer sciences. And there is no reason why they should be turned into hybrids --neither full-fledged seminaries nor proper mainstream educational institutions --by forcing them to take on a role they are not equipped for.

It is a recipe for dumbing them down. In the 1960s, the British government converted several technical institutes into universities to broaden access to higher education. Half a century later, some of these "new" universities are still struggling while the country faces a big gap in vocational training they were so good at providing.

Madrasas, too, are a form of vocational institutes and instead of imposing artificial reforms, the effort should be to develop them into centres of excellence in their area of specialisation.

Of course, one reason why successive governments have been so keen to "modernise" madrasas is to with concerns that they are being used to promote extremism.

There have been allegations relating to their funding by Islamic countries, particularly Saudi Arabia, which has been accused of exporting hard-line Wahabi Islam to the rest of the world especially targeting Muslim institutions on the subcontinent. The BJP has been particularly vociferous in calling for government regulation of madrasas prompting criticism that the proposed reforms are really a pretext for bringing them under government control and undermining their autonomy.

The really worrying bit, however, is the pretence that madrassa reforms are a solution to Muslims’ educational backwardness; and that modernised madrasas equal regular modern education. They don't. Such quick fixes are a huge distraction from the real problem of Muslim education whose scale has been comprehensively documented in the Sachar Committee report. There is a perception that somehow Muslims prefer madrassa education to secular schooling, but the Sachar report points out that only four percent Muslims attend madrasas—and that too “primarily because primary state schools do not exist for miles’’.

Most madrasas are poorly staffed, offer few, if any, extra-curricular activities and are struggling for funds contrary to the notion that they are flush with foreign donations. A report in The Times of India described the situation as “pathetic" quoting the campaign group Human Welfare Association (HWA). According to US-based Islamic scholar Huma Quidwai, because of “a lack of resources and support, the quality of (madrassa) education has deteriorated significantly’’ leaving them with “untrained teachers and poor infrastructure’’.

Let’s face it: much of the madrassa system is broken and not fit even for the limited purpose of providing religious teaching let alone capable of taking on additional burden. The government should leave madrasas alone and, as Dr Sikand argues, “If the state is seriously concerned about Muslim education, it ought to fund more regular schools in Muslim areas rather than seek to present madrasas as an alternative, which can only contribute to Muslim marginalisation’’ (Daily Times, Pakistan).

The government has chosen a lazy and cheap option to deal with the problem of Muslim education, but like all cheap options it could prove expensive in the long term.