Call Them ‘Dictators’, Not ‘Kings’ 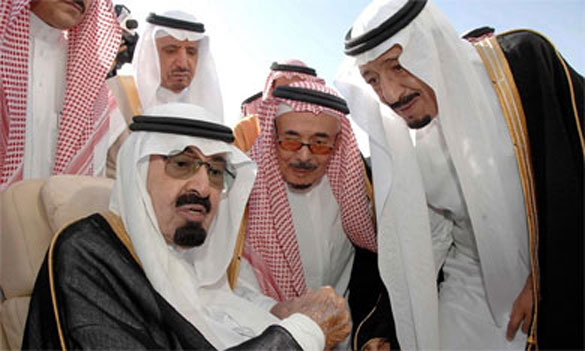 It is clear that any attempt to draw the West’s attention to Saudi Arabia’s history of glaring human rights violations, would require an urgent amendment to the terminology we regularly use to describe the Saudi regime.

The most genial words have been pouring in from across the world for King Abdullah, the “reformer”.

President Obama cancelled his trip to the Taj Mahal to fly to Saudi Arabia.

In his statement on the death of King Abdullah, Obama spoke about the king's initiatives “that will outlive him as an enduring contribution to the search for peace in the region”.

The National Defense University in the US announced an essay competition to pay tribute to the deceased Saudi monarch.

The Japanese government praised him as a “peacekeeper”.

Perhaps the most baffling commendation came from the IMF’s Christine Lagarde, who called King Abdullah “a strong advocate for women”.

The four adult daughters reportedly house-arrested by King Abdullah, just to keep them from returning to his ex-wife were apparently not available to rebut Lagarde’s tribute.

Nor were the millions of other Saudi women who, regrettably, could not leave their homes without their husbands’ permission.

David Cameron applauded the Saudi monarch for his “commitment to peace and for strengthening understanding between faiths”. This, in spite of a leaked diplomatic cable in which Abdullah personally prodded the US to invade Iran; and in spite of his support for extremist outfits engaged in what can only be described as a ‘Shia genocide’.

While praise has been pouring in from nearly every corner of the world, there’s a reason for us foregrounding the West’s adoration of Abdullah in particular.

There is a stark contrast between these countries’ official advocacy for democracy and freedom, and the kind of non-democratic rulers they choose to lionise.

Many Western nations, particularly the United Kingdom, have visible sympathy for monarchism. Never mind the fact that the unelected monarch is basically a ‘dictator’, the British have nevertheless taken great comfort in their country’s “symbolic dictatorship”.

This ‘soft corner’ for monarchism is periodically displayed with utmost zeal, as the common Englishmen proceed to curtsy before the men and women of supposedly superior bloodlines.

Monarchism – which is basically the arbitrary division of humans into peasants and high-borns, based simply on the accident of birth – is systematically glorified in art, music, children’s literature, and even mainstream politics in a surprising number of countries.

Look through: Why India went a step beyond others to mourn the Saudi king’s death

It’s easy to imagine why the word ‘King’ may appear less threatening to the denizens of such nations.

“Dictators” are men like Saddam Hussein and President Bashar Al-Assad. Kings and Queens are decorated, well-starched, and assuredly benign figures that inspire us with their radiant smiles and gentle waves.

Problematically, the Elizabethan/Disney description of a monarch gets projected onto the assuredly non-benign figures of the Middle East, and beyond.

These diplomatic geniuses have always used the simple power of linguistics to route and reroute global outrage, however they find profitable – subjectively sifting out the ‘rebels’ from the ‘terrorists’, and a ‘coup’ from a ‘takeover’.

We say the word “killed” when we want to provoke outcry, and the word “died” where an outcry is politically inconvenient.

Yes, “died”, like from high cholesterol or old age.

Now, with the ideological boundaries between the brutal Saudi administration and ISIS growing blurrier by the day, we find ourselves engaged in Olympics-grade verbal gymnastics, trying to wedge them apart.

Let’s not do that.

An unelected ruler of a country that publicly decapitates and lashes its citizens – often hastily and for archaic, moralistic reasons – and exports fanatical ideas to many politically volatile corners of the world, may be safely described with a word less lenient than “King”.