Indonesia's “Civil Islam” Can Be a Model for the Islamic World

A Movement For Promoting Pluralist Islam Has Been Running In Indonesia Since 1990s.

1.    Indonesia shows that Islam is compatible with democracy.

3.    Indonesian Muslims believe that Islam is for all.

4.    Organisations like Muhammadiyah and Nahdlatul Ulema played an important role in the transformation of Indonesia's Muslim society.

5.    Indonesian Muslims believe that democracy is a Trans civilisational instrument. 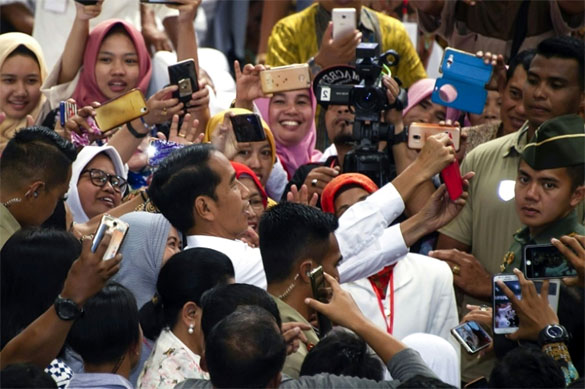 At a time when the idea that Islam cannot co-exist in pluralist societies and that Islam is not compatible with democracy, Indonesia, a country with 87 per cent Muslim population have demonstrated in practical terms that Islam is for all and that democracy is a trans civilisational instrument through which equality and pluralism can be made possible. Unlike the Taliban or the Islamists of the Middle East, the Indonesian thinkers and Islamic scholars do not believe that democracy is inherently western or liberal.

The fact is that democracy as a form of government originated in Greece and not in America as the Taliban would have Muslims believe. Since the 1990s, Indonesia's Muslim thinkers and intellectuals have propounded a new concept of 'Civil Islam' which envisages a society based on equality, non-violence, undifferentiated citizenship and discouraging hostilities against other communities and sects.

Two Islamic organisations ---Muhammadiyah and Nahdlatul Ulema -- played an important role in the promotion of the idea of civil Islam. Apart from that Wahid Institute and Baytar Rahman lil Dawa al Islamiyyah Rahmatal lil Alamin were also established to promote civil Islam. This ideology attempts to shun extremist and violent interpretations of Islam that are a hindrance to the establishment of stability, peace and harmony in thr society.

Another organisation that promoted the idea is Centre for Shared Civilisational Values. The civil Islam opposes the idea of a global caliphate, blasphemy laws and the use of the term Kafir for non-Muslims, and advocates the inclusion of science, history and secular disciplines in Islamic schools.

This shows that the Indonesian Muslims have accepted the pluralist form of Islam known as civil Islam. Farah Adeed's article gives a detailed account of the transition of Indonesian polity from a supremacist society to a pluralist society. Indonesia's civil Islam, therefore, can be a model for the Islamic countries.

Is Indonesia’s “Civil Islam” A Model for the Muslim World?

The rise of “Islamic extremism” in France, the re-emergence of the Taliban in Afghanistan, and the recent drift toward Islamist politics—political efforts to enforce an orthodox interpretation of Islam on society—in Turkey have revived the debate about Islam’s relationship with democracy and liberty. French President Emmanuel Macron wants to build “an Islam in France that can be compatible with the Enlightenment.” The Taliban, on the other hand, have  made it clear that there is no basis for a democratic system in Islam, with sharia law being absolute; in Afghanistan, there will be only “Sharia law and that is it.”

Neither Macron’s insistence on creating an “enlightened Islam” nor the Taliban’s high-handedness in implementing sharia offers a workable solution. Contrary to these singular approaches, Indonesia, the largest Muslim-majority country and the “unlikeliest” democracy in the world, provides us with an example of how Islam is, indeed, compatible with representative government and liberty and able to reconcile with native cultures.

Indonesia’s total population is 255 million, 87.2% of whom are officially Muslim

The country came into the limelight after its successful transition to democracy in the face of Islamist politics across the Muslim world. According to Freedom House, Indonesia is enjoying “significant pluralism in politics and the media and undergoing multiple, peaceful transfers of power between parties” after the fall of an authoritarian regime in 1998. The successful transition of Indonesia leads to the question, How did Indonesia reconcile with Islam?

The role of two Muslim social welfare organizations, the Muhammadiyah (est. 1912), with over 25 million members, and the Nahdlatul Ulama (est. 1926), with over 90 million members, is considered to be extraordinarily important in reconciling Islam with democracy. These two organizations are known as “democracy-and-pluralism-enhancing” civic associations. The leadership and members of these organizations remain committed to constitutional democracy and civic pluralism, which has led to what Robert Hefner calls Civil Islam..

Hefner  argues  that Civil Islam is based upon three broad principles: first, that democracy does not require complete separation between religious institutions and state authority; second, that Civil Islam affords state-societal collaborations, and simultaneously discourages both Islamists and secularists; and third, that the core value of Civil Islam is the notion that democracy is neither inherently Western nor liberal but rather “a modern and trans-civilizational instrument” to negotiate “social difference in a world of diverse communities and interests.” Such an approach to understanding Islam positions the religion as a path to spiritual perfection, not as a supremacist ideology or a vehicle for the conquest of the world.

Another question raised by the idea of pluralistic Islam is how was the notion of Civil Islam created and fostered in Indonesian society? The available literature suggests that the leaders of the Nahdlatul Ulama (NU) started producing “core scholarship” that focused on both Islamic ethics and pluralist democracy. Reforms rooted in this scholarship expanded and increased in the 1990s during Indonesia’s massive socio-political transformations. The majority of Indonesian Muslim thinkers and politicians from the 1990s onward promoted an interpretation of Islam that intended to imbricate its core values and practices with modern and democratic norms such as religiously undifferentiated citizenship.

In 2004, Abdurrahman Wahid, a former president and chairman of the NU, founded The Wahid Institute, for the promotion of Civil Islam. Similarly, Yahya Cholil Staquf, chairman of the Executive Council of Nahdlatul Ulama, cofounded Bayt ar-Rahmah li ad-Da‘wa al-Islamiyah Rahmatan li al-‘Alamin (Home of Divine Grace for Revealing and Nurturing Islam as a Blessing for All Creation) in 2014 and the Institute for Humanitarian Islam and Center for Shared Civilizational Values in 2021 to spread the idea that Islam is for everyone. In short, Indonesian Civil Islam opposes the orthodox Islamic interpretations of a global caliphate, blasphemy laws, and the use of the term Kafir (infidel) for non-Muslims in the context of state life, because both Muslims and non-Muslims have equal rights under the Indonesian constitution. It further advocated ideas such as more education for women and the incorporation of science, history, and other secular disciplines into Islamic schools.

The lasting implications of such reforms can be gauged by the fact that in 1955 religious parties with an aim to establish an Islamic state won more than 40% of the total vote in Indonesia. However, in elections held since 1999, religious parties with an agenda to impose sharia could capture only 20% or less of the vote. The national elections of 2019 showed the continuity of this trend.

Despite the progressiveness of Indonesian Civil Islam, the country has a controversial blasphemy provision—Article 156a of the Dutch-inspired Criminal Code, which criminalizes the expression of “hostility, hatred or contempt against” a religious group and “deviant interpretations” of religious teachings. Indonesia has also recently witnessed the rise of Islamist politics. In 2016, “Defending Islam” rallies against former Jakarta governor Basuki Tjahaja Purnama were attended by more than one million people. These rallies were jointly organized by several groups, including the Islamic Defenders Front (FPI) and the Hizb ut-Tahrir Indonesia (HTI). However, in 2009, Abdurrahman Wahid urged his country to repeal Article 156a, saying “God needs no defense.” In other words, despite the challenges posed by both local and transnational Islamist organizations, Indonesia’s Civil Islam continues to adhere to its principles of inclusivity, freedom, and tolerance.

Some Muslim scholars have been making a case for a “democratic theory for Muslim societies,” and the successful democratization of Indonesia further strengthens their project. However, there are still some questions about the viability and long-term implications of Indonesia’s Civil Islam in foreign cultures.

First, from a democratic theory standpoint, Indonesia’s inclusive interpretation of Islam emerged organically from society. There was never one strongman with a singular understanding of Islam who affected change. Rather, Indonesia’s Civil Islam has always been about public intellectuals, communities, and people’s participation in government. In other words, the largest Muslim civic organization in Indonesia was not an institutional weapon like so many other Islamist groups across the Muslim world, in that it did not try to impose an orthodox religious interpretation on the people.

Second, the mere presence or participation of civic organizations in any society does not necessarily lead to democratization. Such organizations—and the people who run them—have to be grounded in the principles of equality and liberty. For instance, the fundamental Quranic principle of liberty that “there is no compulsion in religion” (2:256) has been at the heart of Indonesia’s democratic evolution.

Civil Islam can be a model for the Muslim world not as a political doctrine but as an alternative framework for an inclusive interpretation of Islam. As a moral and spiritual force, it does not denounce the cultural capital of societies; rather, it affords the reconciliation of local cultures with global realities. This reconciliation is important; as the cases of Afghanistan and Turkey demonstrate, any attempt by Islamists to strip away local culture leads to a serious identity crisis and democracy suffers in the long run.

Finally, as in Indonesia, the project of introducing Civil Islam to the greater Muslim world has to be carried out by local civil society and public intellectuals for the evolution and development of a discourse on pluralistic religious understandings. For this, there has to be a sustained and extensive interaction between Indonesians and those who wish to import the Civil Islam paradigm. There must be conferences, internships and workshops, seminars, and student study-abroad programs to promote the free exchange of ideas. Young Muslims are leaving Islam because of the prevailing religious orthodoxy in countries such as Turkey. As a Muslim, I believe Indonesia’s Civil Islam can help reassure young Muslims about the compatibility of liberty and their religion, which will only strengthen Islam worldwide.

Farah Adeed is a Presidential Graduate Research Fellow at San Diego State University and a member of the Acton Institute’s 2022 Emerging Leaders class. The article has been republished with the author’s permission. The views expressed in the article are the author’s own and do not necessarily reflect the editorial policy of Global Village Space.

Source:  Is Indonesia’s “Civil Islam” A Model for the Muslim World?