Eid-al-Adha Is Sheer Religious Conditioning For All Muslims

1.    Qurbani or Udhiya has an allegorical significance not just in Islam but in all faiths

2.    The essence of sacrifice in Islam is sacrificing what's dearest to the sacrificer.

3.    Out of Allah's 99 major names, 97 names manifest his benevolent attributes.

4.    It’s wrong to think that Allah is happy when you sacrifice a goat, cow, camel or whatever it's.

Every year during Eid-al-Adha, my concern and compassion for poor animals increase manifold as nowhere is Muslims' relationship with meat so obvious as on Eid-al-Azha (Baqr’eid in the subcontinent).

There's no use repeating the hoary-old story of Abraham's near sacrifice of his son (Ishmael or Isaac? - Tabri maintained that it was Isaac, consistent with the Hebrew Scriptures) and then slaughtering a lamb (Dumba) as per god's instruction/s.

Since then, zillions and trillions of innocent animals have been slaughtered to honour a primitive ritual.

Qurbani or Udhiya has an allegorical significance not just in Islam but in all faiths. Hinduism had the tradition of human sacrifice long ago. It sobered down to animal sacrifice and today it's by and large, symbolical sacrifice of a pumpkin (that resembles a head!), though a few temples in Eastern India, Kalighat, Kamakhya (actually Kamakshya), among others, still allow animal sacrifice.

The essence of sacrifice in Islam is sacrificing what's dearest to the sacrificer. It's your life that's dearest to you. So, why don't you sacrifice yourself to please and pacify an ever-demanding god? Next to your own life is the Ana (ego/sense of self) that must be relinquished for the sake of your god. And that's too difficult to drop. When neither can be sacrificed, you make do with poor animals and slaughter them! This is not just unfair and opportunistic, but also reprehensible.

Also Read:  Animal Sacrifice vs. Compassionate Eid: An Open Letter To Our Muslim Brothers and Sisters

We call the Creator, All-Love, “Who sees with equal eyes as god of all/ A hero perish or a sparrow fall “(Alexander Pope). Ironically, we just do the opposite by slaughtering one of its offspring! How can a loving (!) Allah allow poor animals to be slaughtered in his name? Out of Allah's 99 major names, 97 names manifest his benevolent attributes. So, it's wrong to think that Allah is happy when you sacrifice a goat, cow, camel or whatever it's. This is religious totemism or 'religio-metaphorical symbolism' (a phrase coined by Sir Carveth Reid in his Magnum Opus, ' Man and his superstitions ').

Moreover, animal sacrifice is not obligatory in Islam. Many companions of Muhammad didn't sacrifice. Muhammad himself extended his love to animals.

Sufi Islam abhors meat-eating and animal sacrifice even if that be religiously sanctioned. Sufis like Rabia Basri and Rahim Bawa Mohiyuddin were vegetarians, who refrained from animal sacrifice on the occasion of Eid- al-Adha. Rumi and his putative master Fariduddin Attar never sacrificed even a bird. Sufis believe that all creatures, big or small, have an inalienable right to live and grow. Such a sublime thought!

Swiss psychoanalyst Carl Gustav Jung found a connexion between ritualistic sacrifice and dormant sanguinary instincts of humans. He believed that ritualistic sacrifice paved the way for violent indoctrination among humans. This cannot be denied, esp. in these times, when some Muslims are intent on proving their animal instincts by cutting and pruning throats of Muslims from other sects as well as non-Muslims in the name of blasphemy and apostasy.

It's high time, Muslims came out of their religious conditioning and stopped shedding the blood of poor creatures in the name of a bloody ritual that ought to have been discarded centuries ago. But, it's never too late to start, realize and amend. Don't they say, ' Jab Aankh Khuli Tabhi Savera '? Are 'sane' Muslims listening or still caught in the time warp with the stubbornness of a mule? 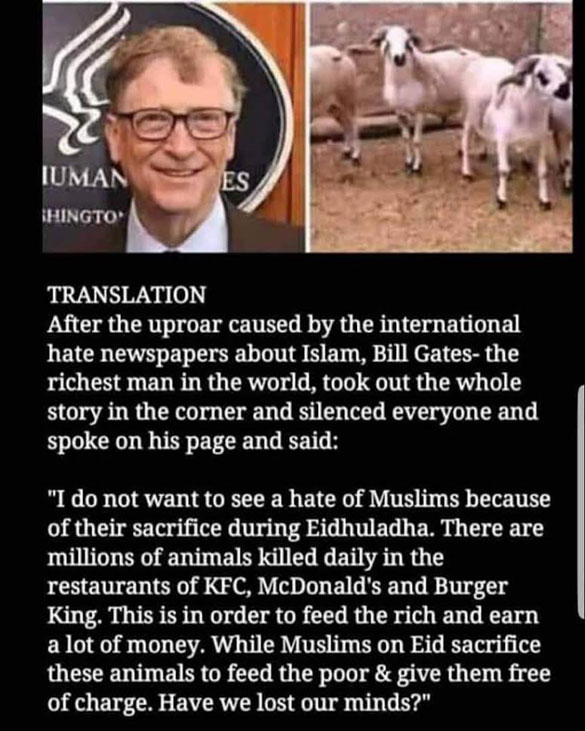