Why Saudi Arabia Is Suddenly Allowing A Lot More Fun

By Donna Abu-Nasr and Deema Almashabi 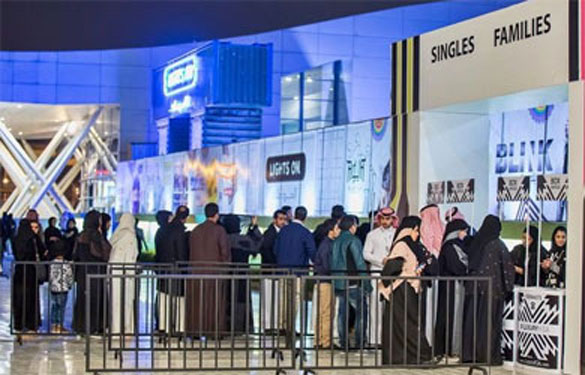 Men and families wait in separate queues at a cultural event venue in Riyadh.(Saudi General Entertainment Authority via Bloomberg/File)

Justin Bieber’s “Let me love you!” blared from giant speakers to greet the arriving audience. Once settled, there were gasps and laughter at the antics of two American magicians before people sat back to savor some opera, mime and dance.

The scene could have been from any variety performance on any weekend just about anywhere in the world, at least on the surface. But this is Saudi Arabia. A closer look, and the cast was all male, only men and children were allowed on stage at the end for photos and the female stewards wore head-to-toe black cloaks under their fluorescent vests.

“It’s a new experience,” Mohammed al-Mawla, 20, a university student from Riyadh, said as the crowd mingled outside the marquee in King Abdullah Economic City where the event was held. “We’d love to have more such shows in the kingdom."

As part of a shock therapy to overhaul the deteriorating economy, the government is relaxing the rules on having fun in the ultra-conservative society -- and also plans to make some cash from it. The kingdom is hardly synonymous with entertainment: religious police order music to be silenced and citizens usually travel to Dubai or Bahrain when they want to catch a movie or a show. Now the plan is to turn cheering people up into an industry.

Anmar Fathaldin, a Saudi who runs a ticketing website called Lammt, can’t wait because he will “make more money,” and have more things to do with his family. He doesn’t expect everything to change, though.

“When I travel it’s to live a normal life,” said Fathaldin, 28, whose business has focused on the occasional comedy show or "intellectual entertainment" at universities. “I can walk with my wife without her having to cover up, we can attend live music events or we can go to the beach with the children. This won’t happen here.”

The changes are part of Vision 2030, the blueprint for a post-oil economy dropped on Saudis in April by Deputy Crown Prince Mohammed bin Salman, the king’s powerful 31-year-old son. It tackles everything from government spending on subsidies to the role of women in the workforce, and people are trying to figure out how it can work.

When it comes to fun, it states that by 2020, there will be more than 450 clubs providing a variety of cultural activities and events. The target is to double household spending on recreation to 6 percent -- that would be higher than the 4 percent the U.S. Labor Department shows Americans spent on entertainment in 2015 -- and create 100,000 jobs, said Amr AlMadani, who runs the newly established General Entertainment Authority.

"This is an economic vehicle," said AlMadani, 36. The focus will be on families and the "guiding principles are our Islamic and cultural values," he said.

The authority sponsored events in the kingdom’s biggest cities and in 2017 plans to expand its activities to other regions. So far, they have included World Wrestling Entertainment in Riyadh -- for men and their kids only -- and a motor sports and music show that drew 6,000 spectators to a venue outside Jeddah. SeaWorld Parks & Entertainment is looking into a Saudi project and Six Flags agreed to open a theme park in the kingdom. James Reid-Anderson, chairman of Six Flags, said the park would cost as much as $500 million.

The variety show in November was inside King Abdullah Economic City, a gated community about 160 kilometers outside Jeddah, and tested some traditional Saudi boundaries. The stage was in a marquee and involved performers from Got Talent shows across the world. The audience wasn’t segregated, and women took selfies or applied red lipstick while little girls skipped to the beat of the music.

While that represents some sort of revolution for Saudis, it’s still overshadowed by one of the strictest brands of Islam.

Most weekends and holidays, there’s bumper-to-bumper traffic on the King Fahd Causeway heading to more liberal Bahrain. About 5 million cars crossed the 25-kilometer bridge in 2015, according to the kingdom’s statistics bureau. Dubai is a favorite destination for artists and filmmakers who cannot show their works at home. When Abdulmajeed Abdullah, a popular Saudi singer, performed in the city in March, the show was sold out to a mostly Saudi audience.

Things have not always been so strict. In the 1980s, concerts by Arab and local artists were popular. By the early 2000s, the Committee for the Promotion of Virtue and the Prevention of Vice that runs the religious police had been given a freer hand. The cops roamed malls and restaurants, arresting unmarried couples found in the same car or eating together and ordering waiters to turn off the music.

Earlier this year, the government issued directives to curb the committee’s powers, saying religious police can no longer chase violators, arrest them or ask for identification.

As Saudis experiment with ways to put on shows without angering religious authorities, organizers of a performance by Canadian stand-up comedian Russell Peters last January separated men and women inside a white tent pitched in the desert outside Riyadh.

The audience, who had driven 95 kilometres outside of the capital down a dark and secluded road to attend, tried to protest before giving up. For 22-year-old college student Marwa Yassin and her girlfriends, the experience was worth it.

"I felt like I was part of a real society,” said Yassin. “We sat together and laughed together. When the show was over, we all stood in lines in the cold to buy burgers or crepes from food trucks. We ran into friends. It felt right."