Muslims! They're everywhere, muttering in foreign languages, obscuring their faces, and yet somehow managing to shove their way of life down our throats. Patrols of youths intimidate gay people in the name of Allah. Even suburbia isn't safe: Arabic calligraphy on a house in Newport has caused the kind of fuss your average leylandii could only dream of. At the same time, some find Islam seductive. Just ask the female converts on BBC3's Make Me a Muslim. Others look at this as all the evidence you need of a dangerous takeover: Sharia's back, and this time it knows where you live. 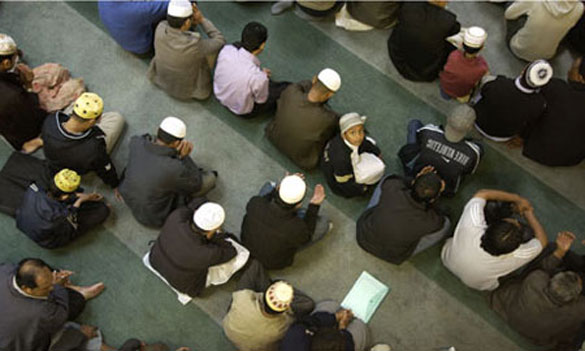 Certain newspapers emit a hum of panic when it comes to Islam. This week the Telegraph published the lament of a "reluctant racist". Its author pined for a lost England (a lost Acton, to be precise) in which she did not feel like a stranger. She laid many pernicious developments at the door of Islam, including the habit shopkeepers have of talking on their mobile phones while serving you. Panic, of course, inhibits clear thinking. I don't want to deny the tumult of our times: yes, it would be better if we all had at least one language in common. Big cities, where we mix with people who dress differently and have different customs, can be alienating places. Homophobic bullying is vile. But how much of this is Islam's fault?

For many people, Britain right now is an unpleasant place to live. Their income, their housing, the local environment – all these may leave a lot to be desired. Inequality rides high. Suspicion of strangers, while always present, does especially well under these conditions. It is easy to take out pent-up frustrations on those who don't seem to be like us. Muslims aren't immune to the impulse. Recent footage of young men harassing a person they believed was gay, telling him to leave because "this is a Muslim area", calling him a "fag" sent shivers down many spines, mine included.

There can be no excuse for this. And before you jump in, orthodox Islam certainly does not provide one. Like all three Abrahamic religions, it has a problem with homosexuality. But equally, unprovoked threats, bullying and aggression are considered sinful. The East London mosque couldn't have been clearer when it branded such behaviour "utterly unacceptable". For the Telegraph, however, this was "a brazen lie". The logic being that the mosque's leaders must secretly welcome the deluge of terrible publicity and prospect of tit-for-tat harassment of local Muslims.

There I go, sweeping uncomfortable truths about Islam under the carpet. It's clearly inimical to the British way of life. Muslims don't share our liberal attitudes towards gay people. But since when has the British way of life made things easy for sexual minorities? Let's pick a date. How about 2003, when section 28 was finally repealed? Not much of a tradition. And the oppression of women? Islam comes in many different forms, and there are Muslim feminists who can argue this point better than I can. Suffice it to say that there is wide scope for interpretation and, even among conservatives, there is the possibility that things will change – just as they might do, one day, in the Church of England.

At the level of our national media, at least, this debate isn't really about wanting to protect gay people (the Telegraph could only recently bring itself to use the word "gay" as opposed to "homosexual"). It's not even the beginning of a reasoned debate about the speed or volume of immigration – something that may be impossible to get "right" if we also want to trade and move freely around the world. It is about taste, or more bluntly, prejudice. The Britain of some editors' dreams will always be more Tunbridge Wells than Tower Hamlets.