Everything Was ‘Haram,’ ‘Haram,’ In Saudi Arabia but Now Men and Women Have the Freedom to Become Whatever They Want 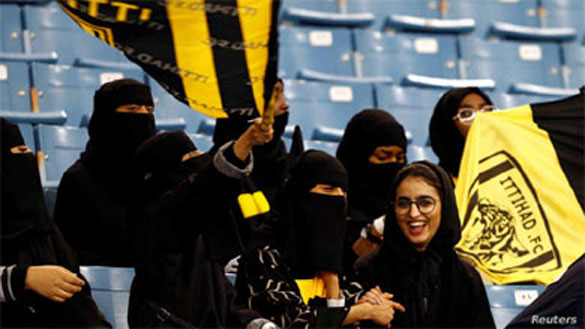 Change is rapidly sweeping Saudi Arabia, with many younger people, especially women, embracing newfound freedoms. Others, however, think social reforms have come too quickly, and fear an erosion of public morals and widely held traditions in the once-ultraconservative kingdom, the bastion of Islam and its holiest sites of Mecca and Medina.

Draped in a black Abaya or cloak, a Saudi bank employee named Noura broke into a jaunty song in Arabic about driving a car during her lunch break at Riyadh’s glitzy Kingdom Tower complex.  “I’m driving now, where do you want to go,” she sang, laughing joyfully about her new found freedom.

Her banking colleague, Ruba, who additionally wears the Niqab or traditional black face veil, is anything but conservative in her views on the recent changes.

“They’re really wonderful and positive. These reforms are giving women a greater scope for employment and incredible work opportunities.  There are increased possibilities opened for women and greater freedom for what she can do.  No, they have not come too fast, they are late in coming.  These could have happened a long time ago,” she said.

Women can now go to stadiums for sporting events and concerts. Men and women mix freely in public after walls separating single men from family sections in restaurants have been scrapped.

Plush movie theatres have been built after years of closure, noisy parties and other entertainment are allowed, and stores remain open during prayer times — once a grave offense punished by the strict mutawa or religious police, now confined to their offices.

The Mutawa were responsible for enforcing conservative Islamic norms of public behavior, as defined by the Saudi authorities. They would often hit women in public places with a stick if their hair was visible from under her headscarf or if their abaya did not properly cover her body.

“These changes are pretty much accepted because where we work, we’re surrounded by our generation,” said 28-year-old Asma, a software engineer, over a McDonald’s hamburger at the Tower’s food court.

“My father has five daughters—all females in the house.  So, he’s thrilled with the changes giving us more independence,” her colleague, Dima, said, reflecting on the financial burden that has been somewhat lifted. 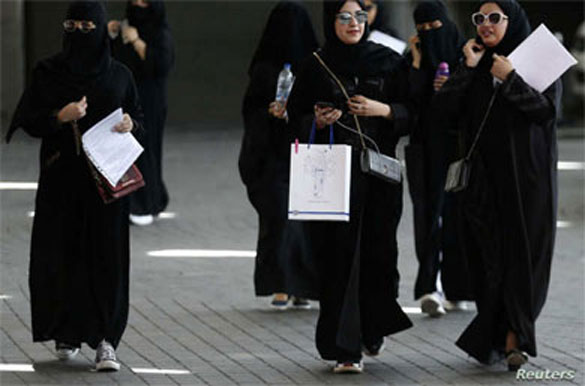 Indeed, some Saudis see inclusion of women into the kingdom’s workforce as a great economic benefit to the country.

The kingdom has a growing population of 34 million, most of them young, and sits at the convergence of Europe, Asia and the Middle East, spurring a solid and growing consumer base, Ibrahim Al-Omar, governor of the Saudi Arabian General Investment Authority, recently wrote in the Saudi Arab News.

The World Bank recently ranked Saudi Arabia as the fastest-reforming country in the world.

“The changes are providing more business opportunities with women given the chance now to work, to drive, to become leaders. And that’s good for business. People want to do treatments,” he said. "Also, we have good relations with other countries for visas. Before it was very difficult to find a visa for Saudi Arabia and now it is very easy. It’s good business for the Saudi people and the Saudi businessman. The change is good,” he said.

Others, though, like Nadia, dressed in a chic black abaya trimmed with a fashionable hounds tooth plaid, said she thought the social changes have come too rapidly. 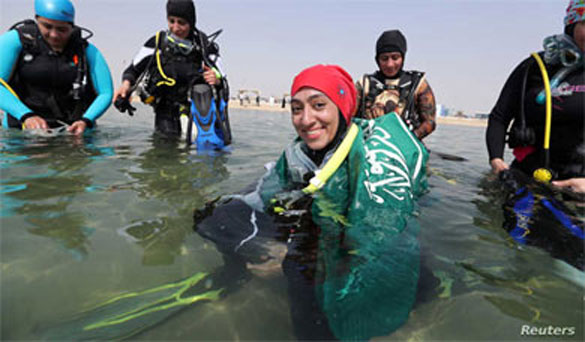 FILE - A female Saudi diver, wearing a Saudi national flag over her shoulders, smiles as she prepares to dive at a dive site in Dhahran, Saudi Arabia, Sept. 15, 2018.

“People are feeling confused by so many things changing all at once. Those living in the cities might adapt more easily in time, but that’s not so for those living in smaller towns and villages throughout the country,” said the 26-year-old mother of three young children.

“They reject the upheaval of traditional values and anything seen as undermining their Islamic principles,” she said, while sipping her flavoured cafe latte.

Another young woman named Sarah, who works in a Riyadh hospital, said her parents were unhappy about the sudden social reforms.

“Although I can now travel without my father’s permission, I still need my parents’ approval on the man I hope to marry,” the 24-year-old Riyadh native said of the scrapping of guardianship regulations.

“Of course, if they don’t approve, the matter can be taken to the family court,” she added. However, the family court in Saudi Arabia that rules on personal status matters is still an exclusively male club with no female judges present.

Yet, another Saudi female educator now in her late 30s regrets that some of the changes have come too late for her.

“I had hoped to pursue my academic career abroad and had won a scholarship to study in England, but I had to give up my dream,” said Suad wistfully.

“My father was unable to accompany me for the trip overseas and it was impossible for me to travel alone, even with his permission because it would appear inappropriate for a Saudi woman to being living abroad on her own. My own and my family’s reputation would have been stained,” she said.

It should also be noted that there are four jailed Saudi female activists and seven others out on bail who fought for the right to drive and other freedoms to be granted to Saudi women for years face trial for harming Saudi Arabia's security.

While Muslim clerics seen to be pro-government have endorsed many of the sweeping social changes, others have outright condemned them in public, saying the mixing of young men and young women who expose their hair and dress in a provocative way would lead to societal ruin in the kingdom, known for its custodianship of Islam’s sacred pilgrimage sites.

Others are shocked over rumours that Saudi Arabia may now considering lifting its ban on the sale of alcoholic beverages in public venues.

Still, a Saudi telecommunications engineer named Saleh, in his 30s, said that although he grew up in a very conservative religious household, he has found himself embracing the changes.

“My mom covers her face and doesn’t receive men in our house. There, my father is king,” he said, laughing. “But this change in our society has happened, and I am enjoying it. On the contrary, I have even participated in some of the new entertainment events that have already taken place,” said the young man who once visited the U.S. state of Texas.

“Before there were limitations. Everything was ‘Haram,’ ‘Haram,’ meaning forbidden. But now men and women have the freedom to become whatever they want.  Of course, respect of our community must go hand in hand, so that things don’t go the wrong way,” Saleh said.

In the past, he said, if he saw a woman's face, he would "think that she is no good" but that is no longer the case.

"Now, I think she is practicing her freedom. This is amazing,” he said.

Source: The Voice of America News