This is an effort to document and record the Iftaar experience with every Muslim denomination, it is a journal of how each tradition within Islam, and a sub sect within each practices Ramadan. The biggest idea that jumps out is seeing the differences and understanding that they are cultural and not religious.

Much is written in this blog, but the focus will be today’s experience. Over the years, I have been visiting different Mosques for Friday prayers, and today, it was the Frisco Mosque (picture below), a temporary Mosque in down town Frisco, as the construction for the new Mosque is about to start.

Nearly 150 people attended the Iftaar, possibly because of the invitation to witness the ground breaking ceremony to expand the Mosque. 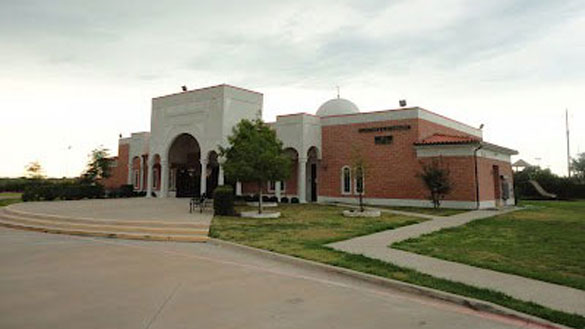 There is one thing that I have been missing in the mosques; fellowship.

However, it was a beautiful experience tonight at the Carrollton Mosque.  The weather was remarkably pleasant and the fellowship was perfect. Usually people dash in and out, but this evening all of us had an opportunity to sit down and socialize and wait for the sunset.

The Christian Church has a formal structure to encourage fellowship. Almost every Church I speak at, has a follow up gathering in the fellowship hall for visiting with each other. I had always longed for that environment in a Mosque, it is not common, nor is it conducive for Muslims now, as they have to go back to work after the Friday congregational prayers. However, the original Mosques were community centers for people to come together. My references are strictly the United States, and India, where I am from. I have no idea how they do in Muslim majority nations where Friday is a holiday for them. I hope someone shares that. 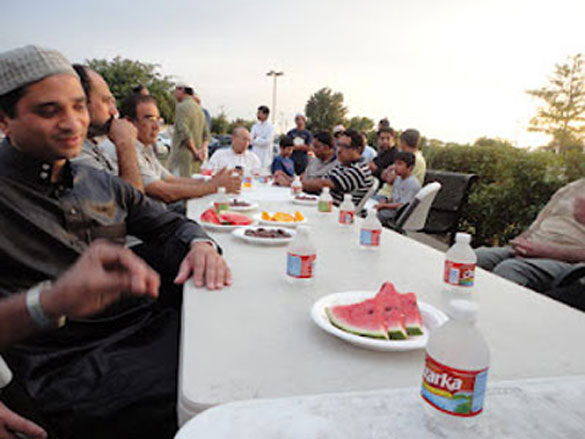 I really enjoyed the Iftaar, everyone got to sit down and chat up with each other, and one Sheikh was asked to give a short talk, he was good, and did give a short talk in the few minutes left to do the Iftaar.  Apparently he is from Morocco.

So when the sun’s last ray disappeared, the Amir (by the way his name is Aamir, but pronounced differently) announced that it was time to break the fast. Traditionally it starts with a bite of the Dates * and in some traditions it is the water.   Can you imagine the consumption of nearly 5 billion dates tonight across the world to break the fast?

Each mosque has a little different tradition, for instance, in Madina Masjid (Carrollton)  the Imam recites the Iftaar prayer, and the group repeats after him before they break the fast, however, it is little different in Shia tradition, and Ahmadiyya tradition is identical with the Sunni tradition. Insha Allah, I will document the differences to understand and respect them as cultural practices rather than religious ones.

Iftaar was followed by the Maghrib (dusk) prayers, there is very little difference in traditions, but there is some. Thank God, arrogance has no place in my heart to say which one is standard; it is what is in one's heart that matters. 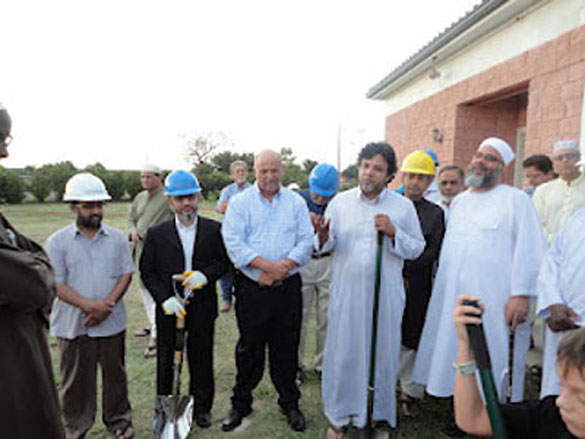 The next thing was the ground breaking ceremony; each one in the leadership got a shovel and a hard hat, and started filling the hole with the dugged out dirt. It should have been the other way around.  They even got a silver shovel for the Amir - the leader: Dr. Amir Shakil.  Glad to see the women taking their turn and even the kids got to throw up some dirt with excitement.

Dinner was healthy and good, the Arabic puffed up bread was fantastic, one of my favorites.  I just wanted to say to my wife that I ate only half the bread watching my cholesterol.  The beans were excellent! Good choice of food!

It was a pleasure to meet some of the friends after a long time.  I remembered 20+ names but there were several more I could not.  I just cannot get the names out, so I will not list any. I don’t want to hurt the feelings of those few whose name is blocked in my mind.  About ten years ago, I could call on every name in most gatherings, I just cannot do it it now, the mind blanks out.  Dear God, help me out the names!

It was a beautiful Iftaar and the evening.

Mosque in Frisco, one of the fastest growing cities in America 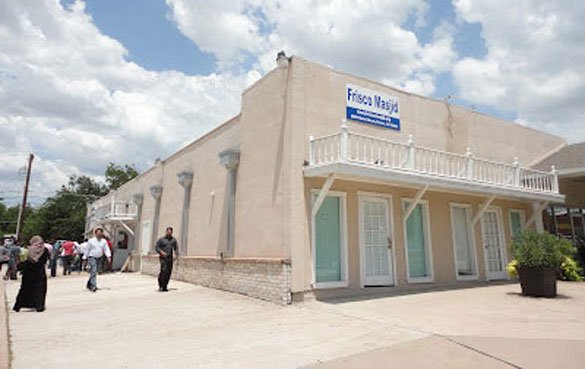 Something to think about

Two years ago, I was intrigued by a Tafseer/ exegesis that I read in this Mosque, the book was printed in Madina, about what idolatry meant. It was a beautiful writing and I wanted to read that again and perhaps copy (iphone pic), but have not found the book again. It had the broadest meaning and would have been perfect to talk about in the interfaith gatherings. Indeed, I had a similar conversation with Michael Wolfe prior to release of his film "The message". I will have to go back and check again where this wonderful book is.

I was early, so I read Sura Baqra- the second chapter in Urdu, the translation was done by Dr. Tahir-ul Quadri. The flow was much better than some of the other translations.  I did not get to read the whole chapter, but a few verses made me stop and think.

2:212, (Quadri translation) starts with, "life for the Kafirs was set up for the worldly pleasures."  The word Kafir was used as though there is a community of people out there, who are called Kafirs. Kafir is a generic word for those who hide the truth, deny the truth or pretend the truth to be different, and it is an individual attribute rather than a group label. I will have to study and read Asad’s translation. Although it has the simplest meaning, it has acquired a derogatory status to ridicule other people.

2:222 (Quadri Translation) - talks about avoiding intimacy with wife until she is pure or clean again. I have severe difficulty with that translation. It gives the impression that a woman is unclean or impure. Instead, if the translation had said, “avoid intimacy with wife until she is through with the menstruation,” it would have meant a natural process. Dr. Quadris’s translation falls in the same pit as the other ones before.    I will have to check Dr. Laila Bakhtiar’s or Edip Yuskel's translation on that.

Even the translation of 2:223 does not meet the civility prophet Muhammad taught. Please remember, Quran is divine and God's word, and it is always about justice, fairness and for goodness of the humanity. The issues we are having are with translations, even the Arabic writers have misinterpreted it. The burden of finding the truth falls squarely on us, after all, no one but us is responsible for our actions on the Day of Judgment.

An individual asked me if will be back tomorrow,  and I said probably two weeks from now. As a reason, I explained to him that I visit a mosque a day of different denominations during Ramadan. He jumped the gun and asked if I went to the Shia Mosque, which is an yes. He was too eager to say they were wrong. He told me that the Prophet in his last sermon was clear; he was leaving his Sunna and the book to the people, but they add his family to it. I said, that is correct, those are the two different versions, he said, but they are wrong - I said, they are wrong to you, but not to them.  He was silently staring at me to understand that, which I appreciated.

I continued, "they think the Sunnis are wrong." He held back, and I am glad he did. The best thing is to accept the different interpretations, but not agree as a matter of principle. He countered it is the same Hadith, how can they say otherwise. It took me a while to keep his innocence intact, yet make the point.  I said I have no problem with what they believe; I don’t believe what they believe, and they don’t believe what I believe… I am not superior to them, nor they are superior to me. I am right in my way, as they are right in their ways....I asked him if he can guess where my analogy comes from? He guessed it right and I hope you do too.

Mike Ghouse is committed to doing his individual share of building cohesive societies and invites you to the 8th Annual Unity Day USA on Tuesday, September 11, 2012. Details at www.UnitydayUSA.com, its an event that builds bridges and uplifts every American.