Allama Iqbal said it well, “Tujhe kya milega namaaz may” what do you get out of fasting and prayer, if it does not make you a humble person. Humility is the other name for Taqwa or spirituality, it broadly means treating, feeling and acting equal with your employee, spouse, kids or others; Muslim or not. How do we measure up? 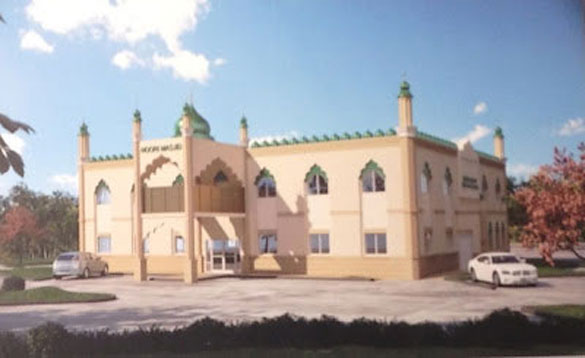 It is a euphoric feeling to feel at home again, I am home* at this Masjid as well, and I was thankful to God for removing every barrier in my life between me and another human being. I believe this is what God meant, to know each other, and when we do, we are home, no matter where we are, and blissfully, I am. The purpose to mention these feeling are to encourage you to have it, by merely respecting the otherness of other.

Allama Iqbal said it well, “Tujhe kya milega namaaz may” what do you get out of fasting and prayer, if it does not make you a humble person. Humility is the other name for Taqwa or spirituality, it broadly means treating, feeling and acting equal with your employee, spouse, kids or others; Muslim or not. How do we measure up?

The welcome was nice, as I was seated with a Khajoor (date) and a napkin, I was smiling to have an actual napkin in my hand.

There were at least six or seven men in bottle green turbans, something I had seen on the great grandson (14th) of Imam Bukhari, and who and I were fellow Ambassadors for peace with UPF. He passed away three years ago and I had great memories of him. At the Parliament of world’s Religions in Melbourne at the Flag Ceremony, I asked people to pick up the flag of a nation that is not theirs or the one their nation is in conflict with, I handed a Palestinian Flag to an Israeli Rabbi and the Israeli Flag to Imam Bukhari, in the spirit of goodwill both complied and actually said, it was a great feeling to be in other’s shoes.

Time for silence,  everyone was ready for breaking the fast, the Imam recited a short three verse prayer before breaking the fast,  and then the traditional verses after we had the date and the water, some had milk ( I am allergic to lactose). He recited and we repeated. It is not a common tradition in other Mosques.

An after reciting the Sura Fateha in Qiyam (standing position of the prayer - the picture on left panel of the site gives different postures), it was quite, unlike the “Aameen” said in Audible Chorus Mosque wide in other Mosques.  This is how it was when I was growing up, no one said Ameen out loud.

When growing up, I was taught, that in the final sitting position, the toes of the right foot remain facing in the same direction as you are, making an "L" out of your foot. Personally, I cannot do it any more due to my ingrown tow nails, and I do not see that discipline in the last 8 days, as I witnessed today. Physically, this posture brings relief to the feet.

The full prayer was identical to most of the Sunni tradition. However, after the conclusion of the prayer with a Salaam to the right and the left, there was supplication lead by the Imam, and  the congregants say Aameen at the end of each verse recited, there was an invocation for Darood (reciting special verses of peace to Prophet Muhammad) as well. This practice is not common any more. 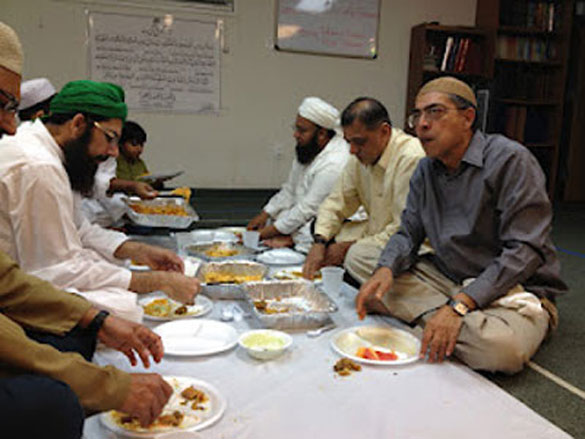 The Iftaar dinner was delicious, The Biryani was one of the best ones  I have had in a while, hot but great and the Pakoras were great as well.

The current Masjid is a portable building, a fairly large one. When I was with Grand Homes, before we built the Model Homes, we rented these huge portable buildings for about $1000/month. The Mosque management has done a great job in customizing it to make a Mehrab for the Imam's area.

The Mufti Saheb, someone who has received special education to be able to render opinions on religious matters. Indeed, my nephew is planning to be one in Bangalore. He led the prayers short and sweet. Again, during Ramadan, let the prayers be short and avoid reciting long Chapters or taking more time in Ruku (bent position) and Sajda (prostration).

The man sitting next to me in the Masjid said he moved from Connecticut for his son’s schooling, the Plano Schools and the Religious school here at the Islamic academy of this Masjid.  Wow! So many Muslims have moved to Dallas for the Religions education, I am not sure about other cities, but I do know we have great many schools. I may have to go sit and listen. It is my town, and I want to do my share of work in building a cohesive America.

The freeway was blocked and I had to cut through the traffic and barely made for the Iftaar. The Masjid is under construction, it is going to be a big one with 10,406 Square feet ground for the school and the sanctuary. It looks like a beautiful Mosque.

The Boston Globe News paper is one paper that captures pictures of Ramadan from around the world, there are some 50 pictures in one group showing how Eid   was celebrated in 2009, and how Iftaar began this season. These are really beautiful pictures listed on this site.

My best memory of an Imam in green turban goes back to my Childhood, when an Imam visited from Hyderabad every year and gave sermons on Friday that was 45 years ago! The one I cannot forget is on Sura Fatiha, the first chapter of Quran, I don’t remember the details, but it produced good feelings then. Indeed, Sura Fateha is a summary statement of Islam.

If reading this is offering you an understanding of different traditions within Islam, and opening your heart and mind to respect other traditions, please feel free to share your comments.

One of the purposes for my visits to different Mosques each day, during the month of Ramadan is to understand various traditions and have the cushion to absorb them all and give full value to each one. I hope, some day, more and more Muslims make these rounds. It is humbling and yet powerful to have the ability to understand the differences and respect them.

Please mark your calendar for the Unity Day USA, a positive event that brings all Americans Together to rededicate our pledge for a peaceful, prosperous and secure America. We are a part of America and we need to feel and live it.  If you liked some of the articles, you will like the description of Unity Day USA at www.UnityDayUSA.com

MikeGhouse is committed to building a Cohesive America and offers pluralistic solutions on issues of the day. He is a professional speaker, thinker and a writer on pluralism, politics, civic affairs, Islam, India, Israel, peace and justice. Mike is a frequent guest on Sean Hannity show on Fox TV, and a commentator on national radio networks, he contributes weekly to the Texas Faith Column at Dallas Morning News and regularly at Huffington post, and several other periodicals across the world. The blog www.TheGhousediary.comis updated daily