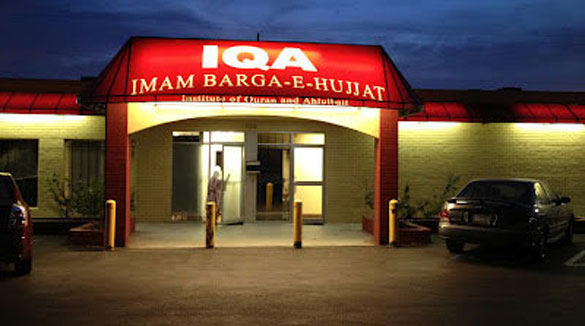 Tonight’s Iftaar was at the Shia Mosque, known as Imam Barga-e-Hujjat in Carrollton. I went in early to familiarize myself with the Mosque, as this is in a new location; the last one I went was on Belt Line Road for Yom-e-Ashura two Muharrams ago. There are several Mosques and the main one is Momin Centre in Irving. 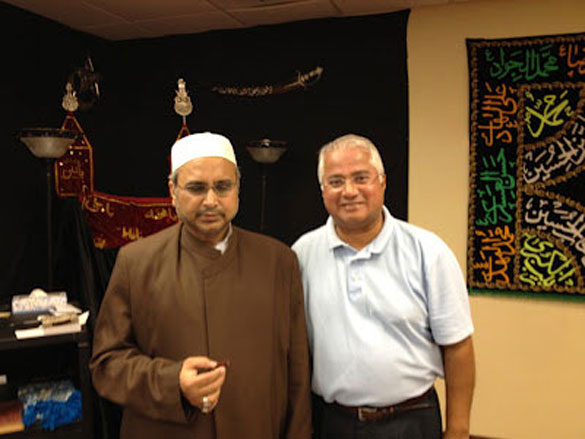 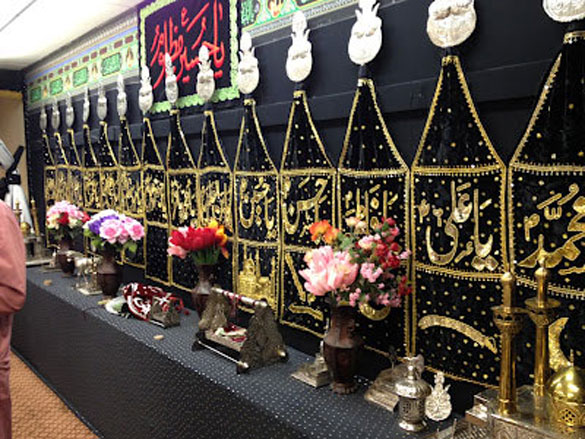 The Names of successive Shia Imams 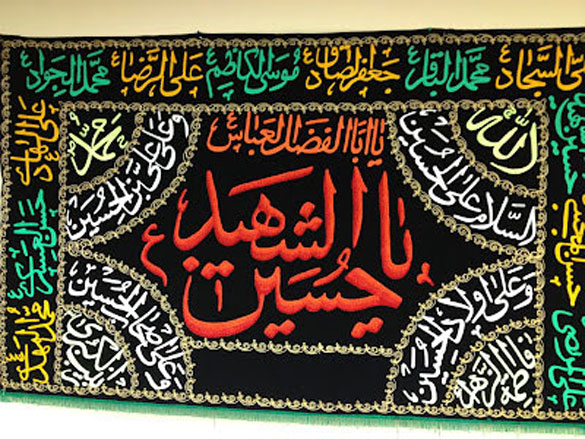 Names of the Imams 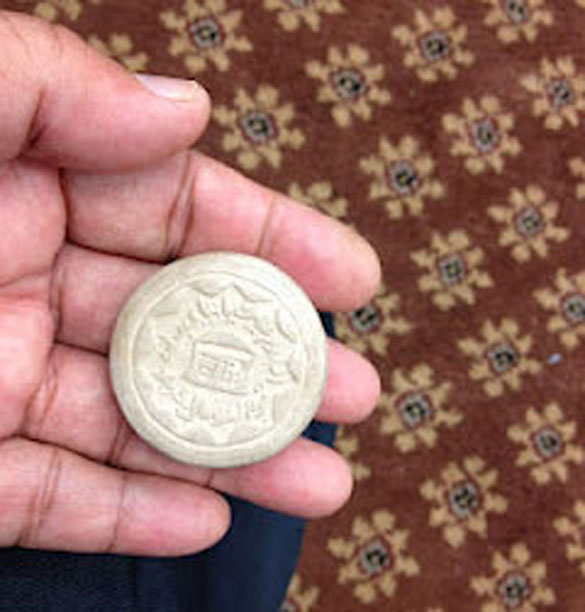 The Shia Muslims follow a different time schedule for Iftaar; there is always that definition of dusk and last ray of the evening.  I went in there at 8:10, but found out the Maghrib (evening) prayers were at 9:00 followed by Iftaar.

I went out and had my Iftaar with Gatorade at 8:34 and was back at the Mosque in-time to join the Jamaat (Congregation).

As I walked in, the volunteers gave me a Sajda-gah, a clay tablet, (Clay from Karbala City, where Imam Hussain was martyred, son of Imam Ali, the 4th rightly guided Caliph of Islam) which is placed on the floor, to rest your forehead during the prostrative posture of the prayers. This practice is exclusive to Shia tradition.

Similar practices exist in Jewish tradition. Every Synagogue you visit, they have Kippah (cap) in a basket at the front that is given to you to wear as you go into the sanctuary. The Madinah Masjid in Carrollton also has a basketful of caps that you can wear if you want to. In a few Mosques in India, they give the cap to wear. I wore a cap when I was growing up. But in the last forty years, less and less people wear caps, and I have not worn it either. In the Swami Narayan Hindu Temple they put the tilak (a dot on the forehead with color, usually Red orange powder).

The Adhan (prayer call) was a long one, same Adhan is recited in other mosques, but without the additional phrases to express the uniqueness of the Shia tradition.

I met Imam Irtaza Naqvi earlier on, as we are new to each other,  and I asked his permission to take the pictures, he said feel free to do so. Last year at the Momin Center the visiting Imam said the same thing, but two years ago, I was asked not to take the pictures of the sanctuary.

The Shia Masajid’s are decorative; they have extensive items on the walls and the benches are displayed with frames of the names of 12 hereditary Imams following Imam Hazrat Ali.  The Mehrab (Niche, where the Imam leads the prayers from) is covered with Damascus Cloth with 5 names embroidered on it; Allah, Muhammad, Ali, Fatima, Hassan and Hussain. Most people in the subcontinent call it Panjatan-e-pak; the holy five.

Invoking the Panjatan-e-Pak is a common practice among mainstream Shia and its denominations; Bohra and Ismaili traditions. Where as it is not a practice of Sunni and Ahmadiyya Muslims. However exceptions are always there, some of the Sunnis from South India do invoke Panjatan-e-Pak and I recall my father used to invoke in his supplications,  where as my maternal Grandfather did not and it is not my practice either. But have no problem with others' devotion.

In one of the pictures, you see the Sajda-gah (clay tablet) is placed in front of everyone in the prayer, I had one too, and I rested my forehead twice on it during the Sajda (prostration with forehead on the floor) and I simply could not do it again. After the prayers, I looked around the other guys’ foreheads for the marks from the tablet, there wasn’t any, and I looked down on the floor, and I found the secret; they had the soft side of the clay tablet on the top and the printed side at the bottom and mine was upside down. No one said a word, but I knew the print on my forehead was visible to the guy next to me, as he glanced at it twice.

Prayers are similar, 3 Rakats (units) for Maghrib (dusk) and 4 for Isha (nightly. They pray both Maghrib and Isha one after the other in a sequence. The Sunnis do that, if they are travelling and cannot come back two hours later.

In Shia tradition, during the standing position of the prayers, individuals drop their hands on side, like in the attention position,  where as in other traditions, the individuals place their hands on their stomach at various levels, from navel all the way up onto the chest.

Before the 2nd Ruku (bent posture with hands on knee caps), Shias and their two branches do their supplication and conclude the prayers with reciting the words, where as Sunnis call on peace and turn their heads to the right and then on the left to conclude the prayers.

The Imam actually recites the phrases audibly during the bent and prostrate positions, unlike the Sunnis and Ahmadiyya.

There is no tradition of Taraweeh Prayers in the Shia, Taraweeh are late night prayers, either 20 or 22 Units to recite a chapter a night from Quraan to complete the Quraan recitation in the month of Ramadan. 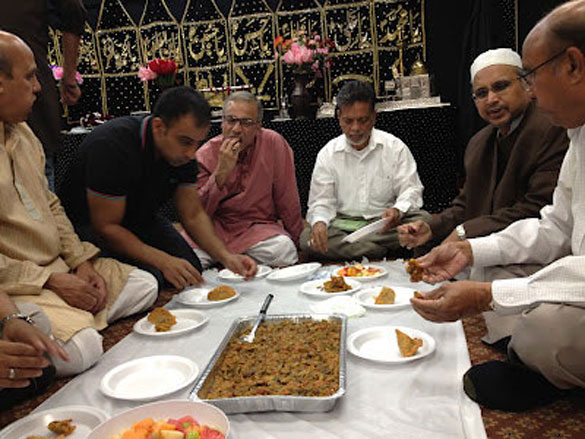 The dinner was amazing, I realized that for 8 days, I had not had the Indian (ok, Pakistani to the Pakistanis, and Bengali to the Bengalis- either one) curry; I have been on a variety of foods. The curry was incredibly delicious; they must have used the Coconut milk in it, like the Thai curry or the Bangalore Curries. ( oops, no napkins again, it does not seem to be in our culture, and  I wiped my fingers in my pant pockets again - I will have to carry a few Napkins from tomorrow)

Fida Hussain, one of my friends and I had a short conversation and his words were amazing, as a photographer/ Videographer he has been to most places of worship, he said, the more places you visit the bigger your horizon becomes. Indeed, I just wrote those words on my 7th day of Ramadan. He was the videographer of the Unity Day USA program in 2005 and I hope he finds the video of using clip on 9/11/2012 program.

One of the purposes for my visits to different Mosques each day, during the month of Ramadan is to understand various traditions and have the cushion to absorb them all and give full value to each one. I hope, some day, more and more Muslims make these rounds. It is humbling and yet powerful to have the ability to understand differences and respect them.

It is a challenge to write different things each day, so far, I have found it easy to do, got another 22 days, and have to be more attentive to absorb it all to write later. By the way, it was a struggle to align and place the pictures in the right place..

A DIFFERENT MOSQUE EACH FRIDAY

Went to Madinah Masjid for Juma prayers, that is the only place I knew, where I can get a parking space and I did.

We have been hearing the same traditional, pre-written, class taught Khutbas for ages. It is time to improve on it. Last night I wrote the ideas for Jumma Khutba (Friday Sermon) and hope our Imams incorporate a few thoughts from it.

By the way, after the first part of the Friday sermon, there was a break for people to do optional prayers followed by Adhan and second part of Friday Sermon. I am still trying to figure it out, if I had experienced that in this very mosque before, but certainly not a tradition in other Sunni mosques thus far, I have a lot more mosques to visit to put it all together. 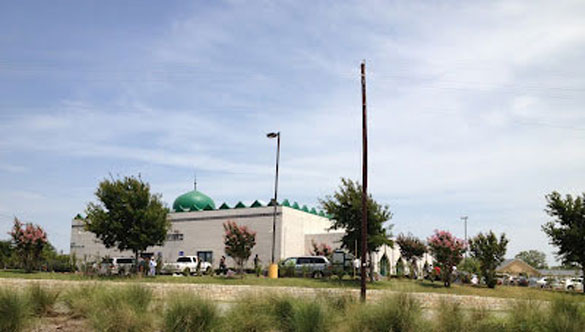 Imam Seraj Misbahi had excellent lines about learning not to react to provocation, instead learn to restrain yourselves and not aggravate the conflict. That was really a good call.

The Imam delivered his sermon in Urdu sprinkled with English.  I was pondering about certain standard sentences, most writers and Imams still use them. For example, “During the month of Ramadan, abstain from sex with your spouse”… If this was videotaped and posted on the Mosque websites,  and non-Muslim watch it, or even Muslims who are born in the United Sates watch it,  it sounds like Muslims have sex all day long and they had to give it up during the fasting, poor thing! What a sacrifice! I don’t know anyone who is that engaged! May the teens are. The wordings may have to be culturally Americanized to give the right understanding. For example, this is the month of self discipline, we abstain from anything that we desire; water, coke, coffee, tea, food, intimacy and the likes…to bring a discipline, by learning to manage our desires and not impulsively act on it.

The bait sentences like “the prayers during Ramadan have 10 times more powerful with greater blessings or certain rewards are 700 times more. Looks like Allah has a big sale during the month of Ramadan do one prayer and get 70! What does it really mean and how should it be expressed. I urge my fellow Muslims to write about it.

Fasting is for the sake of Allah - what does it mean? How does it benefit the mankind? I encourage you to write about it as well.

MikeGhouse is committed to building a Cohesive America and offers pluralistic solutions on issues of the day. He is a professional speaker, thinker and a writer on pluralism, politics, civic affairs, Islam, India, Israel, peace and justice. Mike is a frequent guest on Sean Hannity show on Fox TV, and a commentator on national radio networks, he contributes weekly to the Texas Faith Column at Dallas Morning News and regularly at Huffington post, and several other periodicals across the world. The blog www.TheGhousediary.comis updated daily.