Please note that the Ramadan diary is written for our Muslim and non-Muslims friends alike, hence the language is un-typical. We will do our best to weave through references that our Christian, Hindu, Jewish and other friends can relate with. By the way, we have been talking (Radio) and writing about the essence of major festivities of all religions so we can understand each other. It is a call from God to learn about each other and know each other, when we do that, myths about others disappear, we open up to friendships without reserve or fear. 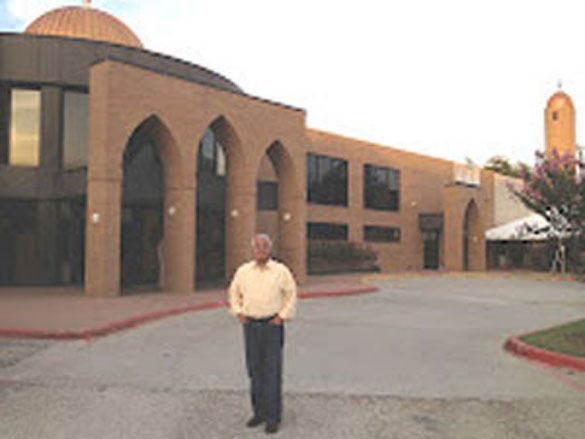 Tonight is the 2nd day of Ramadan, and I went to the Richardson Mosque, my home Mosque (below) and the standard bearer for North Texas Mosques.  A majority of the Mosques (Sunni tradition) more or less follow the traditions followed here. This is the first “major” Mosque in North Texas and almost every Muslim who has been in Dallas prior to turn of the century has been a part of this Mosque. Of course we have over 35 Mosques and several Musallas (Mini-Mosques) in North Texas; we have enough people to have one for every denomination.

The euphoria of Ramadan lends to the fellowship (Ramadan day 1) that we all desire and look forward to. It generates the same good feeling of kindness and piety that Christians feel during Christmas and Hindus during Navaratri, Jews during Rosh Hashanah and others during their festivals.

The best way to enjoy Ramadan is to go early to the Mosque, and I went way too early which lend me to talk with key people and of course, take pictures of the sanctuary for my friends. For my Muslim friends, I highlight the uniqueness of each denomination, much of which is cultural. 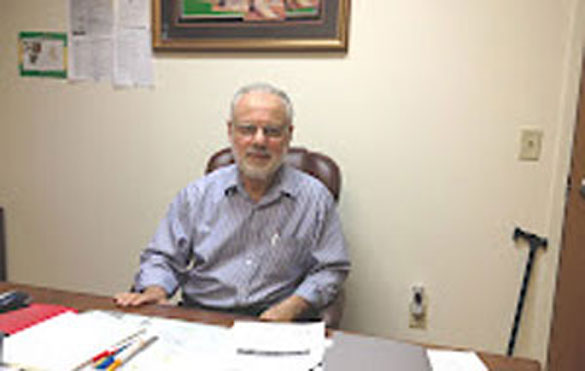 My first visit was with our Imam, Dr. Yusuf Zia Kavakci (more about him in the links below) who and I have worked together on different occasions for almost 20 years from the Asian News days; he has been on my Radio show several times in the Mid-Nineties. Our conversation is usually about intra-faith and interfaith issues. In some of the most critical moments of my public life, he and Imam Zia Shaikh of Irving have been great guides. There was a situation in 1996 and again in 2005 at the Unity Day where we handled it fairly well.  From time to time, he has appreciated my approach that is free from the back-home-baggage.

Richardson Mosque has been a home Mosque to me, although I do not go there frequently, it feels home.  For those living outside the United States, you may find this as a news item that almost every Muslim (both male and female) drives to the mosque; there are no separate residential areas where people of any religion live exclusively.  Even though there is a trend for developing smaller neighbourhoods around the Mosques, it will not become the life style. In the long haul integration (not assimilation) is essential for the overall good of individual communities and nation as a whole. 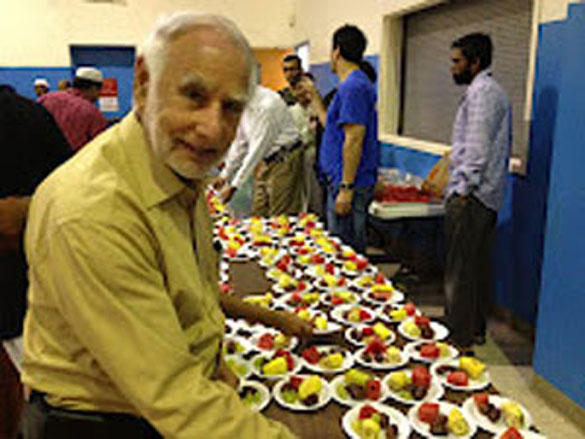 As I was walking out of Imam Kavakci’s office, I ran into my friend Brother Muhammad Suleman, he was the past president of the Islamic Centre and president during the 9/11 crisis, he was also featured in High Profile in Dallas Morning News, a great honour for our community. He and I have worked on many projects together including two years on my Radio show, wisdom of religion (all the religions), where he and I spent two years on Radio talking about Islam on every Friday morning for an hour.  Please say your get well prayers for Mrs. Suleman who is in hospital today.

900, yes, Nine Hundred people were in the community hall waiting for the Adhan (prayer call) to signify the time to break the fast. In Jerusalem, they fire a gun into air to signify end of Suhoor (pre dawn meal) as well as Iftaar. I was held at the check point for Masjid Al-Aqsa by an Israeli guard that is another story.   In smaller mosques, people gather around as a groups and there will a personal announcement (refer to day 1) to break the fast.

Take a look at the plates on the tables, a piece of Banana, three dates, a piece of water melon, a glass of milk and water.  The plates were all set up for people to pick one and take their seat at the tables. Once again, that is 5 billion dates consumption across the world, today! Why dates? That is another story, I have written two years ago, but will re-incorporate when I see dates are flooded in some mosque this month. Each Mosque has evolved into its own practice.

After breaking the fast, the next call you hear is Aqama, fairly similar to the Adhan right before the congregational prayers. Anyone can lead the prayer, even though Dr. Yusuf Zia Kavakci is the imam (pastor, pundit, rabbi, shaman, clergy, minister), he designates one of his students from his academy to lead the prayers, and he has 60 Huffaz (plural for Hafiz, the one who memorizes the whole Quraan) in Dallas, and one of them is the world renowned one: Rashad Hussain the US Ambassador to OIC. 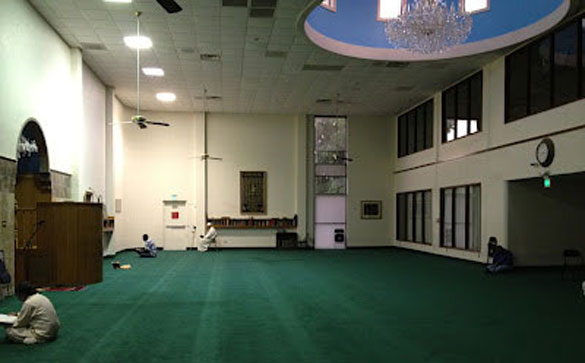 We were back to the community hall for dinner, a large open building that accommodates nearly 1000 seated in theatre style. The hall is used for basket ball and other community activities including interfaith dinners. Nearly five years ago, my late wife  Najma’s  funeral prayers were held here, the Fire Marshall did not allow more than 2200 people, the capacity for the standing room, that’s how Muslim funeral prayers are conducted; in  standing posture. She left in peace and thanks to our friends from every faith for participating in the prayers. 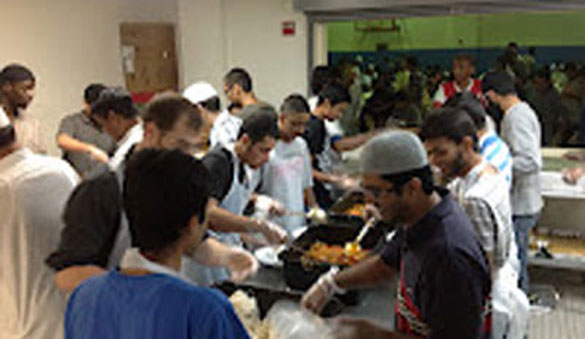 Serving dinner for 900 people is not easy! Mr. Waqar Qazi runs the Silver Spoon restaurant and has become quite adept in handling catering to large gatherings.  There are a few pictures of the kitchen where the volunteers formed an assembly line that beats Henry Ford’s assembly line; they placed the food on the plate consisting of Salad, Rice, lentil-veggies, and Chicken curry in healthy portions. About 6 plates were placed on a tray and put on the counter... the volunteers grabbed the tray and walked to each table, and delivered the food…. All in 20 minutes! Yes 20 Minutes! That is amazing accuracy! 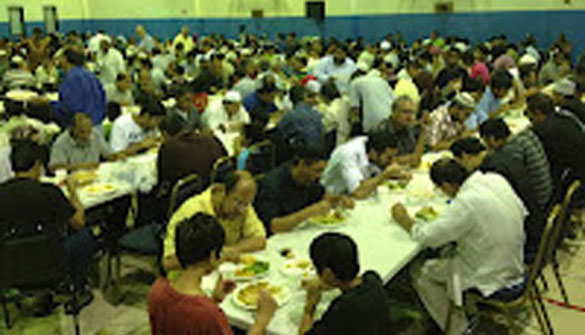 There was a senior citizen, who did not want to be pictured or named, but the people in Richardson know him, he is probably in his seventies, but has the energy of a young man and was managing the food serving and delivery very effectively. He was literally running all over the place to ensure everything ran smoothly. Thanks to this unknown soldier.

The other lead volunteer (forgive me if there was another one) was Amir Omar, the Richardson City Councilman (pictured with a tray in his hand, clean shaven head). He is one of the four or five who made the trips from the counter to the tables delivering all that food in 20 minutes. 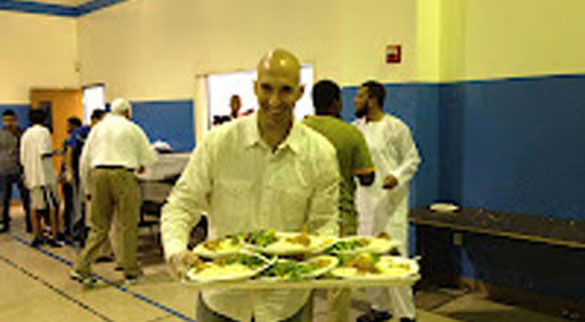 Today, he is one of the most popular council men in North Texas, because he is there  with every community volunteering his time generously. He is an example of how to be a fully participating and contributing member of the society. He is a true representative of Richardsonians. He is on Facebook as well, tag him and show you support.

Yunus Anthony, announced a gathering of new converts, and I regret not making it to that corner, but did talk to him, who was also at the Carrollton Mosque yesterday. I hope he and his group will serve as volunteers for the Unity Day event on Tuesday, September 11, 2012. God willing, I will be visiting Churches, Temples, Synagogues and other places of worship to find volunteer to represent every race, ethnicity and faith to be present at the Unity Day. www.UnitydayUSA.com 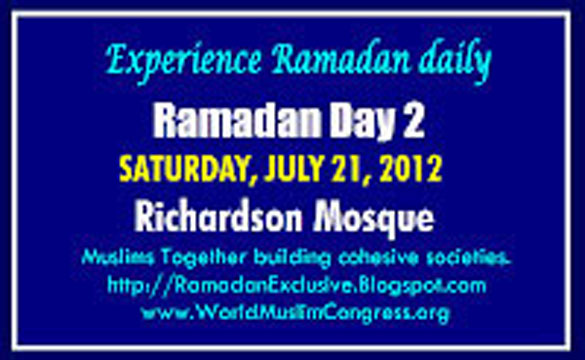 By the way years ago, Richardson Mosque started a Medical clinic to serve the people who do not have insurance, it is for everyone, and people from all faiths and traditions visit this clinic for care.  I am proud of this clinic, where Muslims are contributing to the well being of the overall society. Of course, there are other initiatives and other clinics, and that will be expressed in a different context.

Indeed, Richardson Mosque is an example of being a part of the society, serving the society. I believe that is the purpose of a Mosque, a community centre. More about the Mosque at www.Iant.com

Coming up; the Islamic village http://www.youtube.com/watch?v=R7bjh56GU-0&feature=player_embedded#!

Here are a few pieces I have written about Dr. Kavakci and others issues, I need to put together the work we did through MRRT, the Muslim Rapid Response Team in 2003 in responding to baseless allegations that the local media levied on the Imam and this Mosque. Thanks to Dallas Morning News for publishing it.

There is only one Islam

A challenge to Muslims, are we fit to be Americans

Facebook - You are welcome to visit my Facebook page: www.facebook.com/SpeakerMikeGhouse  the others has reached the maximum of 5000 friends -  -

Mike Ghouse is committed to doing his individual share of building cohesive societies and invites you to the 8th Annual Unity Day USA on Tuesday, September 11, 2012. Details at www.UnitydayUSA.com, it’s an event that builds bridges and uplifts every American. Watch the trailer of the upcoming film - Americans Together, building a cohesive America at www.AmericaTogetherFoundation.com