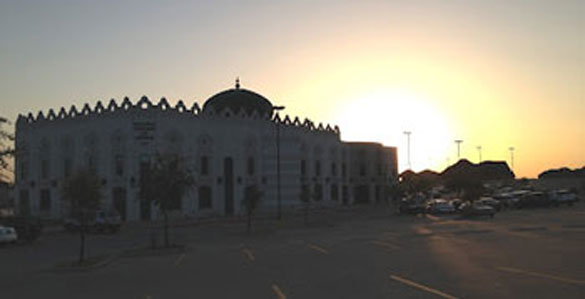 I simply cannot believe it is the 15th Iftaar of Ramadan of 1433.

The Islamic Centre of Irving aka Irving Masjid is in the centre of the Dallas/ Fort Worth Metroplex with great freeway access from both sides of the Metroplex. It’s a fairly diverse congregation with large Subcontinentians (India, Pakistan, and Bangladesh) congregants.

Dr. Imam Zia Shaikh is the resident scholar, author and Imam of the centre. Without being biased towards other Imams, he is my favourite Imam in the area, he is one of the few Imams who understands interfaith relations and is active in it. He and I have authored two articles1, and have appeared in one TV2 Interview. He just wrote a book titled Silencing the Critics which is worth reading (link below to buy from Amazon). You can read more about him at the Masjid Website.

Imam Zia Shaikh has attended at least 15 of the many interfaith events we organize, and he was the master of ceremonies (Compeer) in two of our events - www.Unitydayusa.com and www.holocaustandGenocides.com both designed to promote understanding between people of different traditions.  He was the lead Imam at the www.QuraanConference.com. 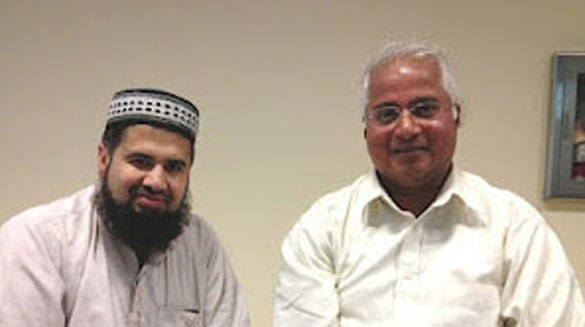 Imam Zia, as he is popularly known as, is a humble, gentle and a kind man. He has a pleasant approach towards finding solutions. He reasons with you rather than saying this is the way, an unusual Imam who makes a fan out of you.  In one of our first meetings some eight years ago, he called on me to discuss my take on Islam that some had questioned, we had a healthy discussion and we saw each other’s point of view and concluded the conversation with more respect for each other, at least on my part.

At the Iftaar, he said something simple but powerful “This Ramadan, if we can take the idea that we don’t need much, and can live with little”. It was in reference to a Dallas area Pastor who is observing fasting. The Imam shared what the Pastor is writing in his blog about Ramadan, “During the prostration, it is a total submission” to God. More about the Pastor at: http://ramadanexclusive.blogspot.com/2012/08/dallas-pastor-observing-ramadan.html

Inside the sanctuary, there was a senior gentleman giving a talk about Ramadan to a group of people - this is a missionary group called Tablighi Jamaat, one of the other persons met me after the prayers, he said, two couples are visiting from Saudi Arabia on a mission to talk about Islam.

The missionaries whether they are Mormons, Evangelists or the Jamaatis (Muslims), they all sound alike, using similar language and too eager to sell their religion. If you had experience with phone solicitation calls, you would see through this. Those guys memorize the whole spill and are eager to get it out of their system, when you interrupt them, they are lost, and instead of responding to your question they resume their spill. I don’t know their success rate, but in sales, they say if you hit enough numbers, someone will buy it.

Imam Zia is sensitive about the needs of Ramadan, he recites short chapters during the Qiyam (standing position - check on the left panel of this blog for various positions) and same goes in Tashahhud - so the people who have fasted can get to the food quickly.  I am sure most people appreciate that. I see the differences in sensitivities of each Imam. 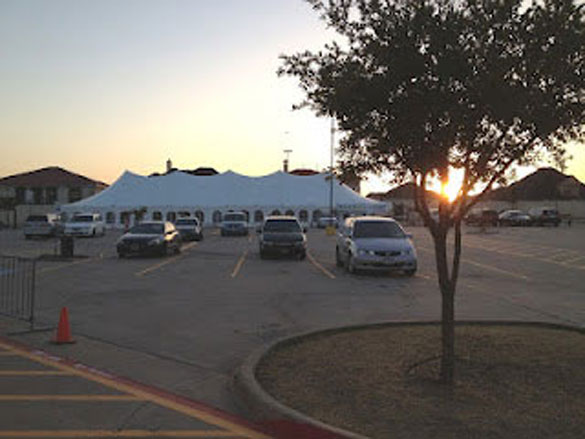 There is a huge tent outside the mosque for Iftaar dinner, it was boxed dinner. While in the line, I got to speak with a few people, one of them has moved from Connecticut and was excited about the arrangements made here. He was asked by his friends back home to take the video and send it to them; he said he has not done that. Instead he will share this site. www.RamadanDaily.com

Please share the practice of your mosque in whatever city you live in.

I must emphasize this, the volunteers are handing the food in the most hygienic form,   thus far, I have not seen any mishandling of food; all wear gloves and serve the food. Glad to know it has become a culture in the mosques.

In Big D, that is Dallas, every now and then we see women wearing full Burqa, it is not common but it exists. I saw a lady walking from the Mosque to the tent this evening completely covered. A month ago, in the course Islam 101 at Plano Masjid, one of the ladies on the panel was completely covered with a small slit cut for her eyes to see. In Carrollton I saw a lady driving on George Bush freeway.  That is three in three years of the 60,000 some Muslims in the area. 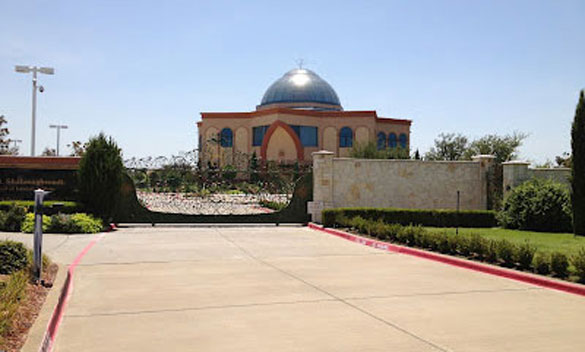 I should have known better, but we learn something new every day. There is a beautiful Mosque ( I thought) in Frisco, way back when I was managing a home building subdivision in Frisco (1998)  this Mosque was under construction and I wondered if Qibla is incorporated into the Mosque as it seemed circular.  Today, I decided to go for Juma prayers, as I go to different Mosques on Fridays. The place was all locked up, I hung around until 2:00 PM and left, it was too late to go the other Mosque in Frisco. The sign in front of the gate said, “school of Islamic Sufism.” The building, the gardens and the entry gate is magnificent.” Insha Allah, I will go back there one of these days. There was also a place called Tawheed Centre in Frisco that was closed most of the times, someone said, that it was an Iranian Christian congregation. I have not verified that.

Tomorrow, Insha Allah, I will be at Ahmadiyya Mosque and on Sunday at the Dawoodi Bohra Mosque.

Mike Ghouse is committed to building a cohesive America with participation from every community. Please visit www.AmericaTogetherfoundation.com

Please visit www.RamadanDaily.com for a record since 2010.