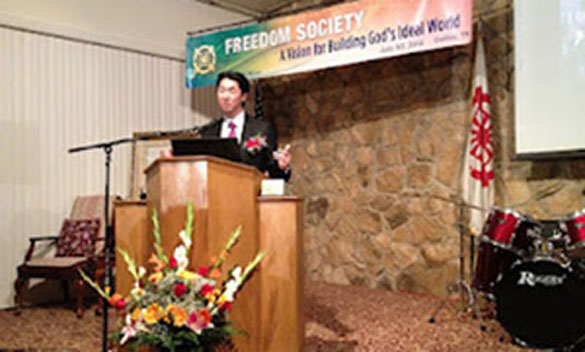 Dallas Family Church is a place I visit a few times a year, and it is always a joy to be there, the folks at this ministry are committed to the interfaith work. Indeed, they have become a family to me, particularly Rev. Mark Hernandez. If he asks me to drop other things and join him, I will do that out of respect for this great man. As the month progresses, I will share some extraordinary stories and experiences from the interfaith events, including the one tonight.

Reverend Moon’s ministry has made several trips to Jerusalem with the Middle East Peace Initiative, and I have been with them as well. In Korea this March, they held an international meeting with thousands attending from across the globe. They celebrated the interfaith movement with a unique concept - they made 4 Gold plated statues of major religious leaders; Moses, Jesus, Buddha and for Islam, they made a gold plated symbol of Quran on a pedestal and conducted their meetings under the umbrella of these.  They are very respectful of Islam, and I have opened many a sessions with interfaith prayers.

Today, Rev. Kook Jin Moon made it to Dallas, a Harvardian heading his father’s business, an inventor himself and a powerful speaker.  He is visiting several Cities in the United States and other countries on a mission about creating  freedom societies, similar to mine building cohesive societies, but his emanates from theology of Rev. Sun Myung Moon, his father.

Mark Sat next to me and was reluctant to eat, I broke the ice, and told everyone to simply enjoy their food, the more temptations sit in front of me, the stronger I get in my fasting, indeed, I looked into each delicious dish, and took pictures as well. The food looked real good. 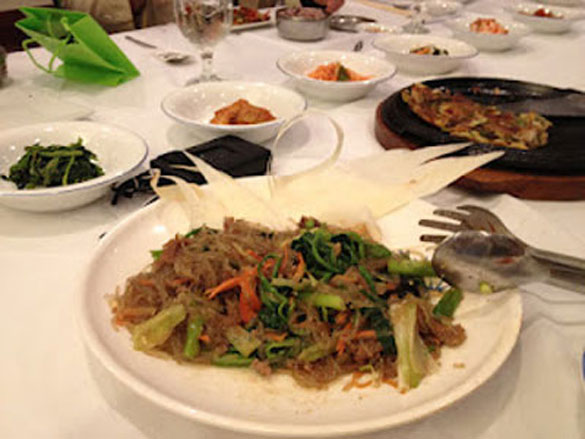 Then I spoke about what fasting was all about - it’s to bring Taqwa, the spirituality in us, it is getting closer to God and acquiring those qualities - to be kind, forgiving, generous, loving and caring towards all of God’s creation, and to learn to be ourselves by being ourselves rather than go with the flow.

Kook Jin Moon shared some powerful views about freedom, less government, less regulations and let the freedom determine the outcomes. Ideologically, it sounds good and almost like the concept of “freedom wins” at last. I shared the concept of freedom expressed in Quran 2:256, that there shall not be any compulsion in the maters of faith.

Furthermore, God could have prevented or programmed Adam to be obedient,  and we would not have been kicked out of heaven. God means business, when he gave free will to Adam, he meant it. He did not interrupt, nor did he slap Adam for disobedience. Adam knew there was a consequence to his decision, and we are living it.

When Christians talk about the first sin, or being born sinners, they mean that it is in our DNA to disobey, and that we have to do our inner Jihad to be free again.

On the other hand, the Saudi Police is intolerant of Muslims who do not fast, as if they are responsible to God on the Day of Judgment. I don’t know if Iran has enforcers. What an individual does is his own business and not any one’s. Similarly, a few Muslims embarrass others by blatantly asking them if they are observing the fast. On our part, we should not look down on those who don’t observe fasting, as it amounts to degrading our own taqwa. I do hope our Imams agree with this. Isn’t Islam about common sense and free will?

Rev. Mark Hernandez is Chair for the seven states area for the American Clergy Association and Family federation of Churches, in 2005 he heard me on 820 AM Radio and  came to the Unity Day USA, since then we have become friends. The founder of this world wide church is Rev. Sun Myung Moon whose ministry is based in South Korea, but has flourished well in the United States. He is quite an influential person on the world stage. I have had the opportunity to have breakfast with him and his wife at 4:30 AM a few years ago, and also welcomed him in Dallas by placing a Garland on him, and my late wife Najma had welcomed his wife Rev. Hak Jahan Moon. I have met with three of their sons, who run their own businesses and head the church now, and their daughter Rev. Injin Moon, who heads the Church in the United States.

The program was from 7-10 PM and breaking of fast was at 8:32 PM. I had informed Rev. Hernandez earlier, who had informed Rev. Moon that I will be stepping out for Iftaar, thank God; Mrs. Yuri Hernandez had set a fruit plate for me and Marzuk Jami, the other Muslim among some 250 people in a packed hall to listen to Kook Jin Moon. By the way, we quietly walked out and did our Iftaar and Maghrib prayers in the fellowship hall. My i-phone compass worked to point to the Kaaba.

This is the first time I am on the other side of the fence.

Five years ago, my Sikh and Zoroastrian friends reluctantly shared a story from seven years ago, and they wanted to know why Muslims had walked out on them in the Unity Day in 2005? They asked if the prayer sequence for religious leaders be reversed this time from Zoroastrians to Atheists (though not a religion, they are a part of the Unity Day) instead of the other way around.  I could not bear their hurt, and quickly did inquires and found out that Muslims did walk out on them when the Sikhs, Wicca and Zoroastrians were speaking. I don’t let these things go unverified, and found out that it was the time for Maghrib on September 11, 2005 and Muslim went to prayers. It was all in Alphabetical order.  My Sikh and Zoroastrian friends were relieved knowing the truth, and the restoration of goodwill.

Our Key note speakers that evening were Daisy Khan and Mayor Pat Evans of Plano. I shared the story and added that for Muslims, duty to God takes precedence over other things, and mentioned to the Mayor and other Mayors present that even if President George Bush (2007) would be speaking, Muslims would go to pray. It was a revealing story, and the moral is, don’t hold against people without verifying the truth. Whether it is Christians, Jews, Hindus, Muslims or any one, we really need to verify before we hold someone in contempt, it is for our own good, saving the anguish and sustaining the goodwill. 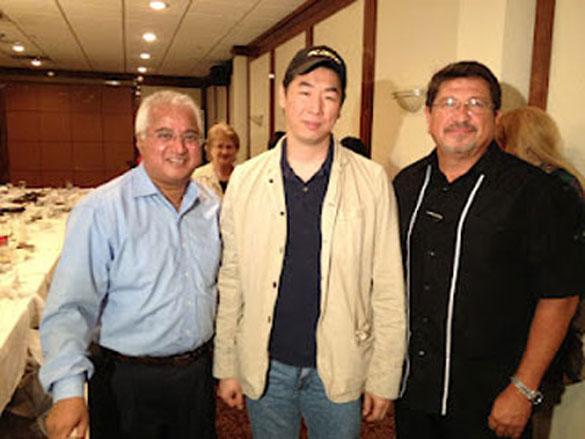 And today, it was my turn to inform the organizers of the event to let them know in advance, that I will be stepping out to do my Iftaar. Indeed, I stepped out at 8:29, right when Rev. Kook Jin Moon was being introduced. This ministry is well versed with the religious nuances of Jews, Christians, Hindus and Muslims.

Rev. Kook Jin Moon’s talk on freedom was incredible, I do see his point, he is more like Ron Paulian libertarian, and I am more like Gary John Libertarian or John Huntsman Republican.  We did talk about Sean Hannity. Sean is indeed a good conservative who believes in genuine individual freedom, but somehow he slips into being a radical Republican. He did correct me once that he is a conservative rather than the Republican and I pray he remains conservative but becomes a moderate Republican.

I will write about Rev. Moon’s speech in a separate piece. However, I do want to thank Rev. Hernandez for inviting me, and appreciate the honor Rev. Joshua Cotter gave me by referencing several times from the stage.

Please mark your calendar for the Unity Day USA, a positive event that brings all Americans Together to rededicate our pledge for a peaceful, prosperous and secure America. We are a part of America and we need to feel and live it.  If you liked some of the article, you will like the description of Unity Day USA atwww.UnityDayUSA.com

A Muslim observing the lent: