Masjid Yaseen is perhaps one of the first Mosques in the area that is built 10 years ahead of its time; ample parking and spacious sanctuary space to grow into. The panelling on the Mehrab is full two stories high and looks beautiful with full height windows. This mosque also has great PA system that gives out clear crispy voice of the Imam during the prayer. 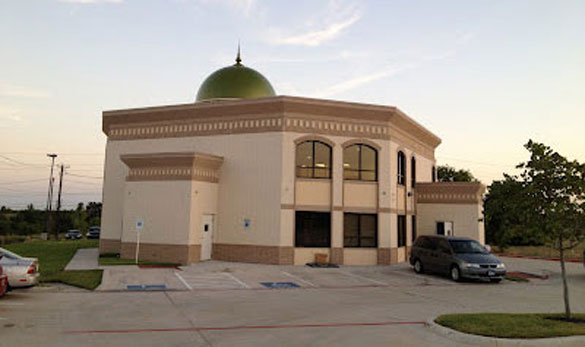 Again, the dome of this mosque is first of its kind that is symmetrical, and raised above the roof top to be seen from outside. The builder in me spots things that are unusual; the dome on this mosque is raised high enough to be visible from the parking space and on either east or west, it is the south side that the dome is not visible, as the building itself is about 5 fee above street level. A few other mosques sunk the dome behind jagged edged walls on the outside, no idea why they cannot focus on street scape. However, that is a different design element altogether, the dome of this Mosque is just very pleasant and so is its colour.

I was looking at the name of the organization, “Islamic Association of Arabi” unlike most other Mosques that list the name of the city. But when I browsed through the website I found what Arabi meant; it is a suburb of New Orleans, Louisiana where this tradition of Mosque took root. Their website reads, “The Islamic Association of Arabi began as a small Masjid (Masjid Yaseen) and in only five years, the first boarding Islamic institute in the United States was established.  From 1990 to 2005, fifty-five American Muslim children completed memorization of the Holy Quran and another thirteen went on to become Scholars of Islam.  Today, Alhamdulillah, it is a sense of great pride that these products of The Islamic Association of Arabi are serving various Masjids and communities all over our nation.” 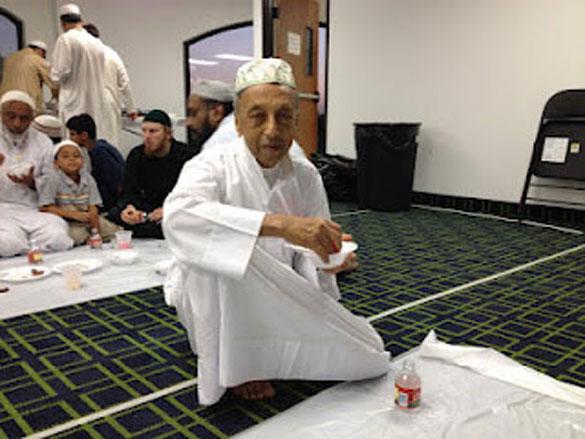 Brother Mir Yusufuddin, one of the earliest Muslims in Dallas

I was early in the mosque, and searched for the Hilali Khan** translation of Quraan, thank God; I did not see it, as it is one of the most dangerous translations of Quraan that fuels Islamophobia. There was a translation in Urdu, and read through the first chapter and it was fine. I am very conscious of the wrong translation and the havoc they play in the society. Sean Hannity at Fox News had mentioned that to me, and I presented him with Muhammad Asad's translation, which is by far the best, but not perfect.

It was great to see Brother Mir Yusufuddin in the Mosque.  He is one of the earliest Indian Muslims pioneers to have come to the United States. Most of the migration started in mid-sixties, right after the passage of the Civil rights acts. But Dallas was blessed with about 10 families who came in early sixties - among them were Brother Sabu, Dr. Bukhari,  Dr. Amanullah Khan, Dr. Afzal and others. I believe Yusufuddin bhai came in around that time. He was on my Radio show in 1996 where we did a talk show series and he shared the story of Dallas then - there was no Halal meat nor any Indian grocery was available at that time. We talked about the history of Indians, Pakistanis, Sri Lankans and others, then Hindus, Muslims, Christians, Sikhs and others. By the way, the oldest Indian in town is a Jewish man by the name Simon Saragon, who migrated with his mother in 1932! The second one was Ike Sekhon, a prominent Indian Sikh, who came to Dallas in 1956. He passed away a few years ago.

The Audible Aameen chorus after Sura Fatiha was toned down in this mosque, and at the Noori Masjid, it did not exist, in other Mosques it is vigorous. 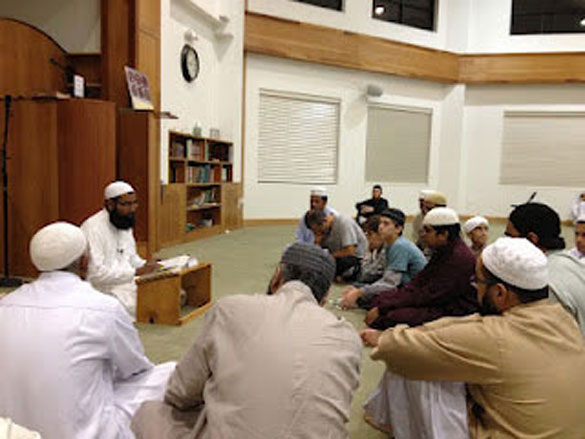 After the prayers, it was time for Hadith reading. The gentleman, a Medical doctor was reading the Hadiths from Sahih Bukhari - In one Hadith, Prophet Muhammad (pbuh) says to his associates that if you can find a way to remove ill-will towards every one, keep it that way, that is the right thing to do. I was rather pleased to hear that Hadith. He shared a few other Hadiths, and repeated each one three times; I was attentive to see if the narrator of the Hadith was different, it was the same narrator. Later he told me that, it was prophet’s practice to emphasize it by repeating three times.

I wish he had clarified the depth of the words “ill-will towards none” as I have heard a few among us, who understand it be “ill-will towards no Muslim”. It should mean towards any human being.  Not sure, if there is a feedback system in place to ensure the kids understood it the same way or the other way.

Last year, I was the speaker at Diwali Celebrations, and told the story of Rama and Krishna to the nearly all white non-Hindu audience, and when the time for feedback came, almost everyone understood the way it was explained to them. Everyone knew Sita and her relationship with Rama.  I was surprised at the attentiveness and listening habits, and the president of Hindu Temple was rather pleased to see good feedback, so did Nishi Bhatia, a teacher and an organizer of the event. 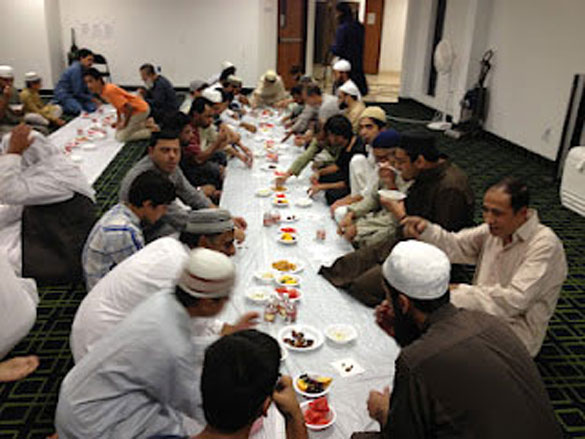 The Haleem was extraordinary, unlike the dark coluored ones, this one was light, and maybe it was chicken Haleem, if there is a thing like that. Haleem is grinding the meat with lentil and cooking it together, creating a thick pasty pulpy food. It had the Hyderabadi touch to it - bits of cashew added to it made it delicious.  I am waiting Ramadan to be over, so I can eat, Bisi Bele Baath, a south Indian vegetarian dish with Lentil, Veggies and Rice cooked together..

I was stunned with the pace of Quran recitation in this mosque. One gathering prays in the main sanctuary and the other on the second floor - the second floor guys are doing the Khatam-Khwani; i.e., completing the entire Quraan recitation in Taraweeh Prayers in 10 days!  The main floor guys will finish in normal time - 27 to 28 days and these guys will do it three times. You know what time they go home? 12:30 AM! And what time do they get up? 4:30 AM!. That is dedication to Ramadan!

I hope you see the uniqueness of each mosque and will have no ill-will towards others for practicing their own version of Islamic rituals, and some times, very differently. By the time, I will finish writing about Ramadan in28 to 29 days, we all should have a pretty good idea about the uniqueness of each Masjid.

If reading this is offering you an understanding of different traditions within Islam, and is opening your heart and mind to respect other traditions, please feel free to share your comments.

One of the purposes for my visits to different Mosques each day, during the month of Ramadan is to understand various traditions and have the cushion to absorb them all and give full value to each one. I hope, some day, more and more Muslims make these rounds. It is humbling and yet powerful to have the ability to understand the differences and respect them.

Are Muslims a part of the American society?http://theghousediary.blogspot.com/2011/10/are-muslims-part-of-american-story.html