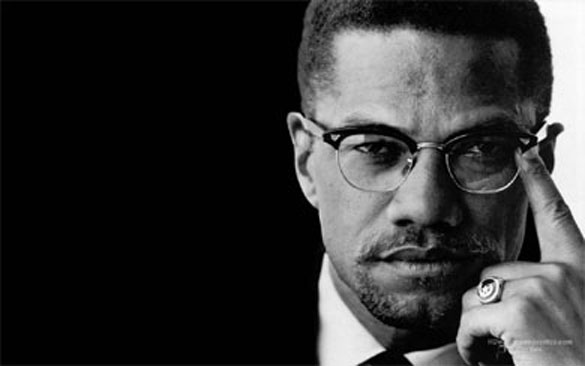 Those who are most in need of him seem to know the least about him. As every aspect of how Muslim’s live their lives comes under intense scrutiny from the media and demagogic politicians, from what they eat, to what they wear on the beach, many of us seem at a loss, dare I say helpless, about how best to respond. Yet the lessons from Malcolm X’s vision and life provide the Muslim community with much needed clarity and optimism when dealing with growing stigmatisation. An unyielding commitment to justice, a desire to better one’s position through a boundless thirst for knowledge and the belief that grievances must be acted upon through relentless activism, are just some of the lessons that have a profound relevance to Muslims living in the West today.

At a time when Muslims living in Europe and America face increasing levels of Islamophobia, which no longer seems to be consigned to parties of the far right but has also entered the mainstream in many countries, a sense of helplessness and frustration has come to pervade Muslim communities. Many complain about growing discrimination and fear mongering, yet simply accept that we must learn to live with it that it has become the norm. I recall the reaction from many of my fellow Muslims who react with horror at the likes of Donald Trump and at images of a lady being forced to remove her burkini on a beach in France, ironically the land of liberty, fraternity and equality. They would highlight their growing unease at what they perceived as growing Islamophobia and at how Muslim communities were being unfairly targeted, before eventually concluding “that’s just how it is.”

This stands in stark contrast with how Malcolm X dealt with the injustices of his time.

“I’ve never been for inaction. Everything I’ve ever felt strongly about, I’ve done something about.”

It is not enough to simply complain and highlight grievances. We have become too accustomed to a simple form of hashtag activism on social media. Rather, we must tackle the difficult issues head on and instead of resigning ourselves to a bleak future; actively challenge the stereotypes and discrimination that Muslim communities face on a daily basis. Ilyasah Shabazz, once reflecting on the life of her father, summed up that “he was never one to criticise without offering a solution.” From my own personal experience I have come to realise that for far too long many Muslims have criticised growing Islamophobia, yet have failed to offer solutions at a grassroots level about how best to tackle it.

Yet we must recognise that we will be unable to challenge the negative narratives that exist around Islam and Muslims, without a proper understanding of how we ended up in the position we find ourselves in, what the underlying causes are and how we can improve relations between Muslim communities and those of other faiths and none. That is where education comes in and why Malcolm X was so keen to stress the importance of learning.

As Malcolm would once explain, “I could spend the rest of my life reading, just satisfying my curiosity.” For Malcolm, even prison was a place where he would dedicate himself to the pursuit of knowledge, satisfying his boundless curiosity. He once claimed that “nobody got more out of prison than I did. In fact, prison enabled me to study more intensely than I ever would have if my life had gone differently.”

If we are to better our position and tackle injustices, then we must develop the same thirst for knowledge that Malcolm X showed. In Europe at present, many Muslim communities have all the worst social indicators in terms of housing, health and education; it is of paramount importance that education is recognised as a means through which to alleviate this. Malcolm X was in no doubt about the role education had to play in helping to tackle injustice, as he stated:

“Education is our passport to the future, for tomorrow belongs to the people who prepare for it today.”

After his return from pilgrimage in 1964, Malcolm began to move away from his hard-line approach to black nationalism, to a more conciliatory tone. He had a reversal of heart and philosophy about multicultural unity. Seeing people of all different colours worshipping in Mecca, he saw the strengths of unity.

Yet today, the Muslim world finds itself marred with division. The sectarian differences in the Middle East are having knock-on effects in Europe and beyond. I have seen how within the Muslim community in which I live, differences are played up between Sunni and Shia along with fierce arguments and divisions between rival schools of thought within Islam – a far cry from the unity that Malcolm thought had come to define Islam. Here too, there are many lessons to be learnt for without unity, Muslim communities will be unable to deal with the many challenges that they face.

The biggest strength of Malcolm X was his humility, his willingness to admit to his mistakes and shortcomings on his journey to the truth. Central to his vision lays his belief in people and their possibilities, no matter what their circumstances. So long as people had self-belief anything was possible. This applies to the Muslim community and Muslim leaders more than ever before. The life and legacy of Malcolm X is something that we can all learn from.

Basit Mahmood is a young British Muslim living in the UK. After graduating from the University of Cambridge, he regularly writes about politics and current affairs and is passionate about tackling Islamophobia.