The Price of Modesty 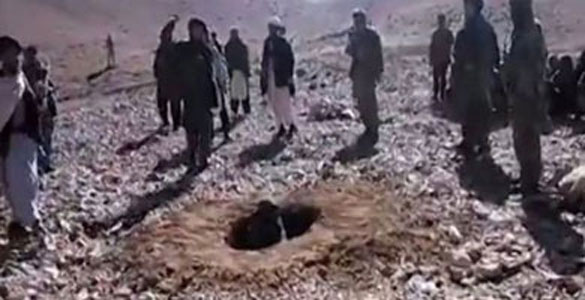 Photo: Rokhshana was 19-years-old when a gang of men in Afghanistan stoned her to deaththis week.

Rokhshana was 19-years-old when a gang of men in Afghanistan stoned her to deaththis week. The men who stoned her were enforcing Islamic law, otherwise known as Sharia. According to the governor of the province, Ghor, she lived in a Taliban-controlled village. Rokhshana was forced to marry someone she did not want and she fled with another man, hence the accusations of adultery that led to her sentencing and brutal execution.

Sharia codifies Islam's many rules and governs everything from how to worship daily to personal behavior, economic and legal transactions and the governance of a nation. However, it is most commonly used as a tool to rob women of their most basic rights, including sexual autonomy.

Before Rokhshana's tragic death, the world's attention was caught for a while by the plight of Sakineh Mohammadi Ashtiani, who was sentenced to death for adultery in Iran, a country governed by Sharia law. Sakineh was ultimately not executed after an international outcry in her defense.

Before that, the world knew of the plight of the girl from Qatif, in Saudi Arabia, who was gang-raped by seven men and sentenced to 200 lashes and six months in prison for being alone with a man who was not her relative (see this from Katie Couric's Notebook when she was at CBS).

The girl from Qatif was ultimately pardoned by the late King Abdullah of Saudi Arabia under pressure from President Bush. Unfortunately, the pardoning did not mean that a precedent was set to quash the law in such cases; it was nothing more than a gesture of politeness to the US.

Sometimes a publicity campaign here in the West followed by strong diplomatic action can work to save the life of a victim. Thanks to pressure from Western governments, Meriam Ibrahim, the Christian woman who was sentenced to death by the government of Sudan for apostasy and adultery, was able to get out of Sudan last year.

The problem is that so few cases make it to the headlines of the Western or even local media. What I find to be a double tragedy is that when the life of a woman is lost or threatened, we in the West condemn the act of cruelty but fail to take a stand against the principle upon which the punishment rests. It is like denouncing the Sharpeville Massacre of 1960 while saying nothing about the South African government's doctrine of racial apartheid.

The only way to stop these ghastly punishments against women is to campaign forcefully against the principle of Sharia -- to stop the Islamist narrative that says Islamic law protects the modesty, honor and well-being of the family.

Of course not all Muslims enforce Sharia. Many don't understand it, others don't like it and many more flee the places where Sharia is enforced. Sharia is also used against men to silence them, to control their lifestyles and to imprison them in an ancient code of conduct. But Sharia is particularly toxic against women.

If the Pew Research Forum's 2013 report is anything to go by, we should be alarmed by the near universal acceptance of Sharia by large numbers of Muslims polled. The Pew study found that, in response to the question "Do you favor or oppose making Sharia law or Islamic law the official law of the land in our country?," the nations with the five largest Muslim populations -- Indonesia (204 million), Pakistan (178 million), Bangladesh (157 million), Egypt (80 million), and Nigeria (76 million) -- showed overwhelming support for Sharia. To be precise, 72 percent of Indonesian Muslims, 84 percent of Pakistani Muslims, 82 percent of Bangladeshi Muslims, 74 percent of Egyptian Muslims, and 71 percent of Nigerian Muslims supported making Sharia the law of the land in their respective societies. Ninety-one percent of Iraqi Muslims and 99 percent of Afghan Muslims supported making Sharia their country's official law.1

This bodes ill for women. If indeed these attitudes are translated into actual law, we will see a great reduction in the scope of women's freedom, as well as instances of horrific injustice. For those living in the West, who may think that these terrible things happen only in far away countries, think twice: Support for Sharia is also rising among Muslims in the West. 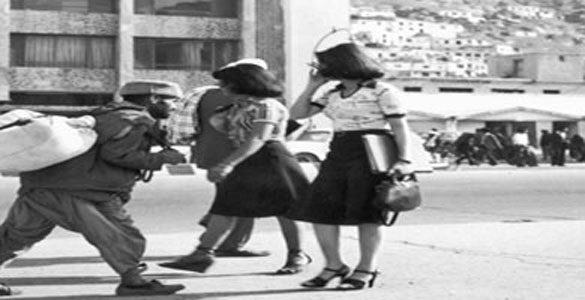 Women in short skirts and high heels walking freely down a street in Kabul. (Photo by V. Seykov/Keystone/Getty Images)

In some of the press coverage of the sickening murder of Rokhshana, such as at CNN, we see snapshots of the streets of Kabul. The contrast between the past and the present is astounding. The pictures for the past (as far back as 1950 and as late as 1981) show women in knee-length skirts, high heels, short-sleeves, printed clingy tops, wearing sunglasses and carrying stylish pocketbooks; we see male and female students at a polytechnic looking perfectly comfortable in one another's company. Back then, some women preferred to cover their bodies, to be sure, but those who did not shared the streets safely.

By contrast, the pictures of the present show women covered from head to toe in all-encompassing garments with only a mesh-like slit to let them see where they are going. In another snapshot, we see a picture of women attending class. From the back they look like a row of out-sized teapot cozies. 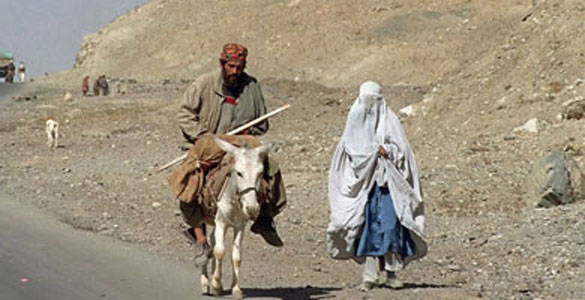 And what is true of Kabul is equally true of Tehran, Baghdad, Cairo, Bamako and even Mogadishu. While Western feminists celebrate their victories, Muslim women are watching the clock turn back.

What went wrong? How did such confident women see their newly gained emancipation slip through their fingers?

The answer lies in the emergence of the Islamist movement -- that extraordinary upsurge of political religion that has become the ideological epidemic of our time.

All across the Muslim world, these movements and what they were saying about the place of women in society may have caught women by surprise. Perhaps the confident women we see in these pictures underestimated the pull -- not only among men but also women -- of the Islamist narrative.

As with the rest of the Islamist agenda, there are three distinct stages that got women in Muslim majority countries on the defensive. First is the stage of outreach (da'wa), followed by a phase of compliance and group pressure and, finally, the stage of imposition or use of force.

All that we in the West regard as modern and normal in relations between the sexes was presented as an outrageous affront to God's law and a sure way to destroy society. Fashion, makeup, dating, romance, recreational activities where the sexes mixed such as the theater, cinema, cafes and restaurant visits, family planning, two working partners and the division of labor at home between husband and wife -- all were defined as the pathologies that would bring humanity to the brink of destruction. Promiscuity, rape, prostitution and the erosion of the family would be the result of such freedoms, Islamists insisted.

The Islamists offered instead a narrative of modesty that was simple, traditional and accessible. In their eyes, a woman's body is one big genital organ. Not only the part between her legs but her hair, eyes, arms, legs -- all of her being is a call to a man to have intercourse. Because of this, she must cover herself to avoid the attention of men. She must lower her gaze, lower her voice, change her gait, minimize her movement, not wear perfume and eliminate everything that might remind a man that she has a vagina. If she does not, men will attack her. If she is attacked, it is said to be her fault because she was immodest and unleashed the sexual urges of men.

Once a few women are convinced of this narrative, they become the example for other women to follow. They openly reject modern fashion and start to wear the hijab. They agree to stay at home as much as possible and accept a pious male guardian as their guide. This male is in charge of the family honor and constantly reminds the ward of how her body, her voice, her choices could be a liability to family honor.

If she suffers verbal, psychological, sexual or physical abuse, she is to take it on the chin. She accepts a division of labor that reduces her role to that of wife, mother and scrubber of floors. In cases of conflict she accepts the terms of divorce decreed by God, so that her husband takes custody of her children after the age of seven.

Why, we in the West are bound to ask, should Muslim women sacrifice so much for so little? The answer offered by those who push the modesty narrative is that Allah will reward us in the hereafter.

Tragically, many of those who fall for this story accept that answer.

There comes a time within a single family when the voices arguing for modesty succeed in marginalizing their opponents at home. For instance, a family of nine daughters may find that seven out of nine wish to observe the rules of modesty. Life for the two sisters who resist the modesty rules becomes difficult. Sooner or later they relent.

The same can happen in a classroom, a whole faculty or campus, a neighborhood, a village or town and then, ever so gradually, a whole society.

What is remarkable about this stage is how effective the organized voices are against those who merely resist and after a while succumb.

What follows is change at an astonishing speed: Those who in stage one were pleading for attention for their cause of modesty now have the upper hand. Now they occupy the self-righteous, finger-waving, head-shaking moral high ground. The adoption of Sharia and a modest outlook is no longer a personal choice or even a religious obligation best left to the believer; it is now mandatory or else! That is when you see self-appointed brigades of men patrolling the streets with sticks and whips driving women away from public squares and demanding they comply. Think of the morality police in territory controlled by ISIS or the Taliban, as well as the morality police in Saudi Arabia and Iran. Corrupt, repressive governments are pressured to adopt more and more Sharia compliant policies. Family law is the bone many of these governments throw to the wolves of Sharia.

The vague promise of a reward in the afterlife can never justify the oppression of women as defined and practiced under Sharia in the name of modesty. For those of us lucky enough to be on the outside, it is not enough to show our disgust at the cruelty of the punishment. It is not enough to express our indignation at the growing prevalence of punishments like the one meted out to Rokhshana. We must also expose and ultimately defeat the unjust principles of Sharia.

Western feminists have wasted too much time on "leaning in," not to mention the finer points of paternity leave. They need to waken up to the massive erosion of women's rights that is currently underway in the Muslim world. This is feminism's counter-revolution. And Rokhshana is very far from being its only victim.

1. The Pew study, "The World's Muslims: Religion and Society," involved 39 countries and territories on three continents, with more than 38,000 face-to-face interviews in more than 80 languages, covering almost every country with more than 10,000,000 Muslims.

Ayaan Hirsi Ali, a fellow at the Harvard Kennedy School, is the author of "Infidel" (2007). Her latest book, "Heretic: The Case for a Muslim Reformation," was published in April by HarperCollins. She is also the Founder of the AHA Foundation dedicated to the protection of women against violence justified in the name of religion and tribal custom.