Islam in Taiwan: Lost In Tradition

Every Friday afternoon about 1,000 Muslims gather for the weekly prayer at the Taipei Grand Mosque.

Only 20 percent are local Taiwanese - the majority come from Indonesia, Pakistan, Malaysia and various other countries from Africa and the Middle East. 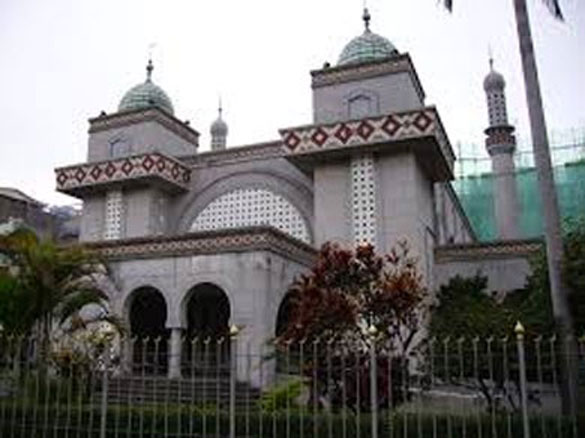 Nestled in the heart of the capital, the mosque was built in 1960 thanks to local donations and funding from the King of Jordan and the Shah of Iran. It has also developed strong ties with Saudi Arabia, as exemplified by the symbolic visit of King Faisal of Saudi Arabia in 1971.

The self-governed Chinese island of Taiwan is about 90 percent Buddhist.

According to Omar Yang, chairman of the mosque, there is a crisis of faith among the Muslim community here stemming from the new generation's lack of education about Islam, and the prevalence of Chinese culture and traditions, which have led to the fading away of Islamic practices.

In an interview with Al Jazeera, Yang recalled the story of a family from central Taiwan who discovered their ancestors were Muslims. They respected various Islamic practices, including not eating pork, but never questioned their ways.

One day they unwrapped one of the offerings their ancestors had left on the traditional Chinese family shrine, and discovered a copy of the Quran in Arabic.

"Knowledge about Islam is not being passed on to the next generation," Yang said. "That's the real problem."

The first Muslims are believed to have settled in Taiwan, formerly known as Formosa, in 1683 along with the Qing Dynasty. But the majority assimilated into the mainstream culture and gradually stopped practicing Islam.

Most Taiwanese Muslims today are the children and grandchildren of soldiers of the Kuomintang (KMT), the Chinese Nationalist Party led by Chiang Kai-Shek. They settled in Taiwan in 1949, following their defeat by China's communists led by Mao Zedong.

Commonly referred to as Hui Muslims, they represented about 20,000 of the 60,000 soldiers who settled on the island.

Based on a 2012 report from the PEW Research Center, Muslims now account for only 0.1 percent of the overall population of 23 million people.

"As Taiwanese, we're less interested in religion and faith, because our priority remains to survive as a nation," Yang told Al Jazeera.

Taiwan is not a member of the United Nations, and its status as an independent nation with respect to China remains a contentious political issue.

The country has tried to distance itself from mainland communist China on a political level. One of its greatest achievements has been the establishment of a democracy that officially recognises 26 religions, including Islam, known as "Hui Jiao," the religion of the Hui people.

According to a 2014 report from the PEW Research Center as part of its Religion and Public Life Project, Taiwan ranks second in the world in the Religious Diversity Index, after Singapore.

"Taiwan is a very tolerant place," said Anas Chao, a 28-year-old Taipei-based designer whose family came to the island with the KMT.

Yet, according to him, it is Muslims' responsibility to think of ways to teach and preserve Islam "while not destroying or affecting the local Taiwanese traditions".

The millennial generation in Taiwan is less interested in religion and culture, preferring to spend the little leisure time that they have in the many karaoke bars, nightclubs and cafes.

"Growing up in Taiwan, I was very confused about my identity and always felt a contradiction between Taiwanese culture and Islam," Sharifa Yang told Al Jazeera.

For the 21-year-old student, this often pushes young Muslims to prioritise Taiwanese culture over their Muslim identity.

"I think the young Taiwanese Muslims suffer from ignorance about Islam because they don't come to the mosque to learn, but also because the Taiwanese environment influences them," she said.

Ignorance about Islam stems from a general lack of interest, but is also evident in the perception that there is little to be gained from religion, when success in Chinese culture is defined by hard work, wealth and status.

The future of Islam in Taiwan lies with new Taiwanese converts and the arrival of foreign migrant workers from Muslim countries.

Indonesian female domestic workers account for the majority, with more than 200,000 currently living in Taiwan.

The community has become so important that Indonesia's Bahasa is now the third language displayed at the Taipei Grand Mosque, after Mandarin and Arabic.

According to Syrian-born Imam Omar Ayash of the Taipei Grand Mosque, it is easier to teach Islam to this new generation that has not been exposed to the traditional ways of the past.

"Islam in Taiwan has been mixed with Confucianism, Buddhism and Taoism," he said, adding it makes it hard to teach the older generation without infringing on their customs.

With a recent wave of migration, a new social and religious landscape is slowly forming in Taiwan.

"Gradually it could be like Japan or Korea, as the original Chinese Muslims who came with the KMT are decreasing in numbers, while the number of foreigners who settle down in Taiwan is increasing," Chao told Al Jazeera.

"The Chinese Muslim feeling could then be replaced by a more exotic mix of Taiwanese-Indonesian, Taiwanese-Pakistani, Taiwanese-Moroccan, et cetera, creating a new Muslim way of living," he said.