Why Muslims Should Junk Madrasas

1.    Uttar Pradesh will not extend grants to new madrasas; Assam doesn’t was to use the term at all.

2.    Muslims have linked the madrasa system with their religious and cultural identity which is fallacious.

3.    All cultures undergo change and there is no reason why the Muslim culture should not.

4.    Madrasas presently serve as the political bases of the clerics who have a vested interest in perpetuating the system.

5.    The Muslim cause is only served through modern scientific education, not through an outmoded system of religious education. 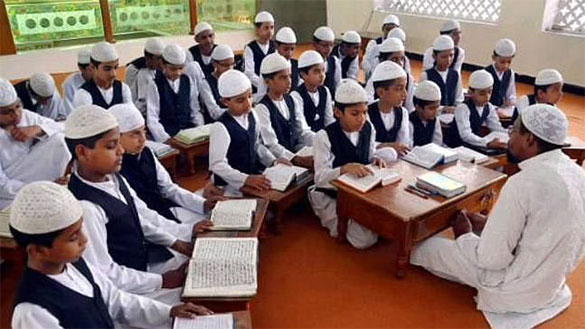 Two statements on madrasa education have recently been splashed across multiple media outlets. The first was from Uttar Pradesh’s lone Muslim minister announcing that no new madrasas would be given grants by the state government. The second was by the Assam chief minister stating that madrasas should cease to exist. He argued that religion can be taught within homes while the state should solely occupy itself with modern scientific education. While the Uttar Pradesh minister Azad Ansari did not state the reasons for not extending government grants to new madrasas, it is surmised that the state has come to a realization that government funds should not go into funding religious education.

The statements have predictably been severely criticized in various quarters, including Muslim by organizations. Both Assam and Uttar Pradesh are ruled by the BJP and the loss of trust between it and Muslims has meant that any move on part of the government with regard to Muslims is being taken negatively. In many instances one cannot fault the Muslims as the government has done very little to earn the community’s trust. Moreover, will the desire to keep out religious instruction out of our schools going to apply equally to all religions? Only time will tell us if these two state governments will have a similar attitude with regard to Hindu Gurukuls and Sanskrit Pathshalas.

However, there is a sense in which madrasas occupy a unique position in our overall educational scenario and the Muslim community needs to do some fundamental rethinking about the continued presence of these institutions. They need to ask whether such institutions serve any purpose in the present times or are they simply draining the meagre resources of the community which can be more fruitfully utilized elsewhere. One of the first things that we need to think about is the sheer size of madrasa education. The Sachar Committee told us that only about 3% Muslim children access these institutions. As I have pointed out earlier, this number is a gross under-estimation; not less than 10-12% Muslim children are studying in madrasas. It must be remembered that there are government funded madrasas which also teach contemporary subjects but the number of students studying therein a far fewer as compared to those who exclusively teach religious subjects only.

No other community in India has such a huge number of students who are exclusively studying religious subjects. Moreover, these subjects are so outdated that they have lost relevance in contemporary times. Muslims often complain that they have been left behind in education by successive governments. But why do they not realize that no government can help them if they continue to insist on the continuation of madrasa education. After all, the government can only say that it will modernize those madrasas that are in their control but their jurisdiction does not extend to the community funded madrasas who are free to teach a curriculum very much of their liking.

Also Read: Evolution of Hadith Sciences and Need for Major Paradigm Shift in Role of Hadith Corpus and Scope of Madrasa Education

There was a time when madrasas served an important function. They were primarily the institutions through which recruitment happened in the medieval bureaucracy. Muslims need to ask what useful function these institutions are serving today? Linking them to a supposed Islamic culture is equally fallacious. If a culture does not change with the times, then it becomes ossified and starts becoming a fetter to the further development of any community. This is precisely what madrasa education is doing to the educational futures of thousands of children who are attending these institutions. There is no new thought that is emanating from these schools; students are rote learning without any comprehension. Those who are sending their children to such places are too poor to comprehend whether there is any worthwhile education happening or not. And huge amounts of the community’s internal resources are being wasted to support and perpetuate these madrasas. If in place of 10 or 20 madrasas, a good modern school can be established, it will eradicate the educational deprivation of the Muslim community within a decade. But then, do we have the will to do so? Or are we even thinking in these terms?

The only class which benefits from the continuation of madrasas are the clerics. For long, they have opposed any changes in the madrasa curriculum in the name of tradition and culture. Nowhere in the world, students are forced to read texts which were written hundreds of years ago. But then, these clerics are product of the same system and hence have developed a vested interest in perpetuating the same system, thereby maintaining the status quo. We must also note that madrasa students serve as an ever-ready mass of followers who can be rallied at short notice for any political purpose. In all the movements spearheaded by these clerics to safeguard their interests, madrasa and their students have served as foot soldiers. Controlled by different factions like the Deoband and Bareilly, there is little hope for bettering the lot of madrasa students till the time the suzerainty of these clerics holds supreme. These are the same forces which arm twisted the government to exempt madrasas from the Right to Education Act 2009, which made age-appropriate education a fundamental right for all children in India. But then, if you are a Muslim child, your religious leadership has made sure that you are bereft of this fundamental right.

There is no point blaming the government for everything that plagues the Muslim community. The problem has also been a complete lack of introspection over what should be our priority. It might be that the governments of UP and Assam have a lot to answer to their Muslim citizens, but then heavens will not fall if a new madrasa is not given a grant or if madrasas are being renamed as government schools. These measures of the government in the long run will only help the community educationally. But what will help them more is to dismantle the system of community funded private madrasas which are pulling Muslims into the vortex of medievalism.